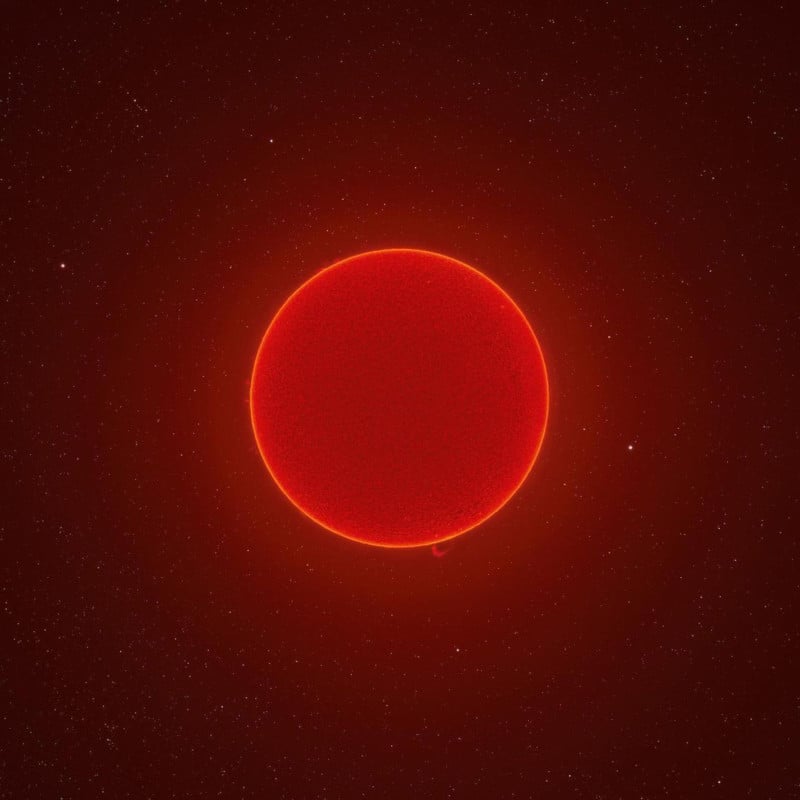 Backyard astrophotographer Andrew McCarthy has released this remarkable photo of the Sun that he says is the clearest shot he has ever made of the star.

Shot of the afternoon of Monday, April 5th, the photo is a massive 230-megapixel image that was created by stacking over 100,000 individual exposures.

The goal of the image stacking was “to build a massive mosaic of the solar chromosphere while simultaneously defeating the atmosphere by stacking so many frames,” McCarthy writes.

If you’re interested in trying this type of stacking and have the necessary camera and telescope equipment already, you can look into AutoStakkert!, a free program that McCarthy uses for some of his work.

“AutoStakkert! is lucky imaging software used to automatically analyze, align, and stack images of the Sun, Moon and Planets that were taken through a telescope,” the software’s website states. “Using a fast video camera, noisy and slightly distorted images are obtained, that can be combined into a single high quality image using this software.

“AutoStakkert! is free software, easy to use, very fast, and generally produces the sharpest results compared to other lucky imaging software.”

The Sacramento-based photographer was aiming for art and aesthetics rather than accuracy.

“I processed this one a little differently than past shots, hoping to capture the spirit of how it looks through a solar telescope,” McCarthy says. “The difference is you can’t see stars, they were added in processing as an aesthetic choice.”

A couple of years ago, McCarthy created a viral hit by stacking around 50,000 shots and adding stars to create a beautiful 81-megapixel photo of the moon.

If you’re interested in owning McCarthy’s astrophotography artwork exclusively and digitally, he’s minting his photos as NFTs through Ephimera. This particular photo was sold for 0.40 Ether, or about $1,000 at today’s exchange rate. McCarthy’s latest NFT (also of the Sun) sold for 1.4 Ether, or about $3,500.

If you’re interested in owning physical prints of his work, those are available too through imagekind. You can also find more of McCarthy’s work on his Instagram and download high-resolution versions of his images by becoming a Patreon supporter.