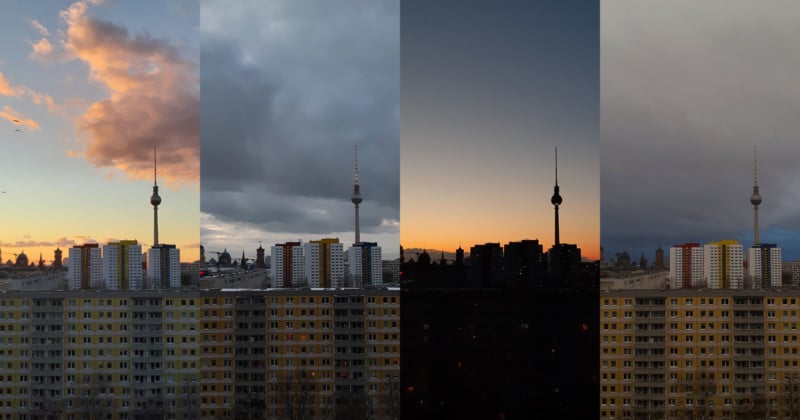 You can say that our lives are affected by two significant components: space and time. This can be seen as a cliché from the physics books or in practice in our daily lives, the space in which we live and alongside it the time that passes in that space.

About a year ago the COVID-19 pandemic began, and it has majorly affected all aspects of our lives. When I went on vacation from work “without an end date”, I decided to start something new alongside the projects I am already working on. In my free time… and space.

What could be cooler than seeing a glimpse of the beautiful changes in nature from a bird’s-eye view?

Something in the city of Berlin and the distant urban landscape was calling to me — from my balcony, you can actually see most of the famous tourist sites in Berlin: the special TV tower in Alexanderplatz next to the Mitte municipality, the famous Berliner Dom, the Humboldt building, the Reichstag building, and the city’s important churches and government towers. 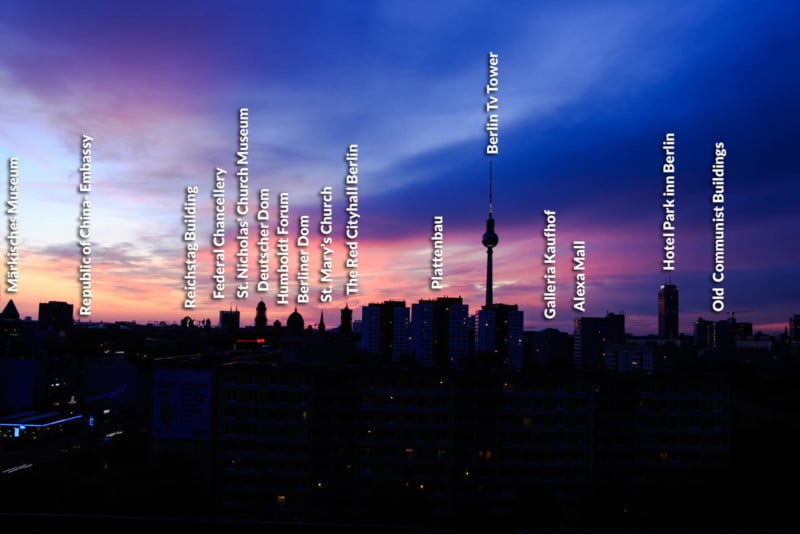 The better the visibility, the more sites can be seen by the eye from the balcony. A spectacular panoramic piece of landscape unfolds in front of me daily.

On April 20, 2020, I took a first snapshot from the balcony of my house on one of the higher floors of the tower tall building in which I live, intentionally using a simple smartphone and not a high-end camera, Why?

1. It allows for “quick shooting”, quick uploading, and minimum fuss

2. It’s a kind of instant photo, my private digital Polaroid.

3. It’s all about the light and the content, not the technique. 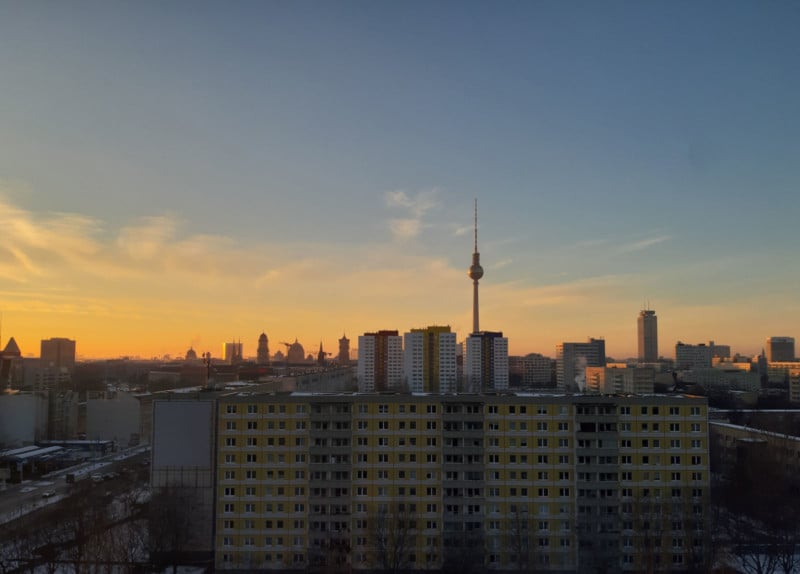 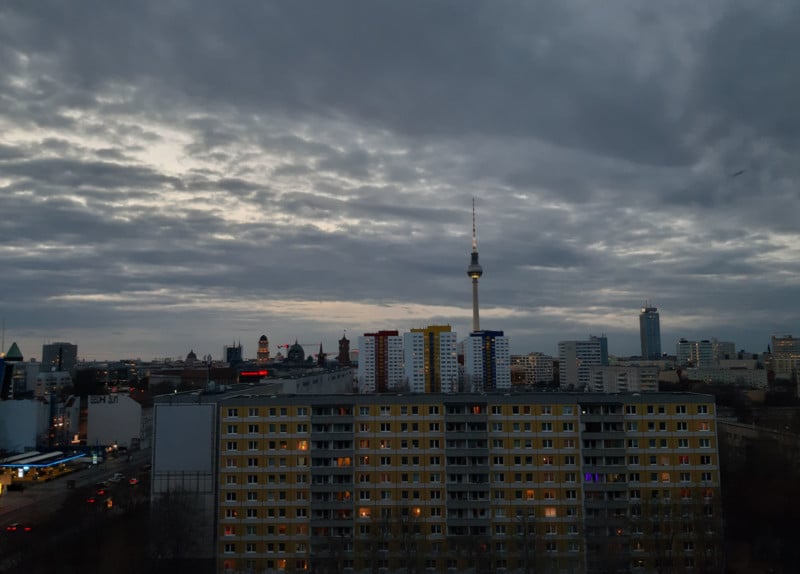 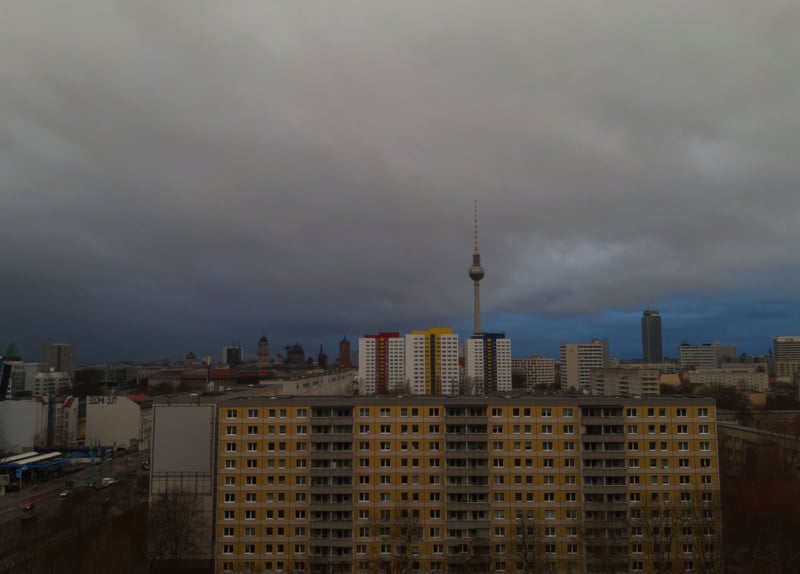 Since then, a lockdown was announced in Berlin, and the tourists have disappeared from all the shops and sites, changing the city. The only option for getting out of the house was going to the supermarket. I’ve made an effort to capture the window landscape view nearly every single evening. 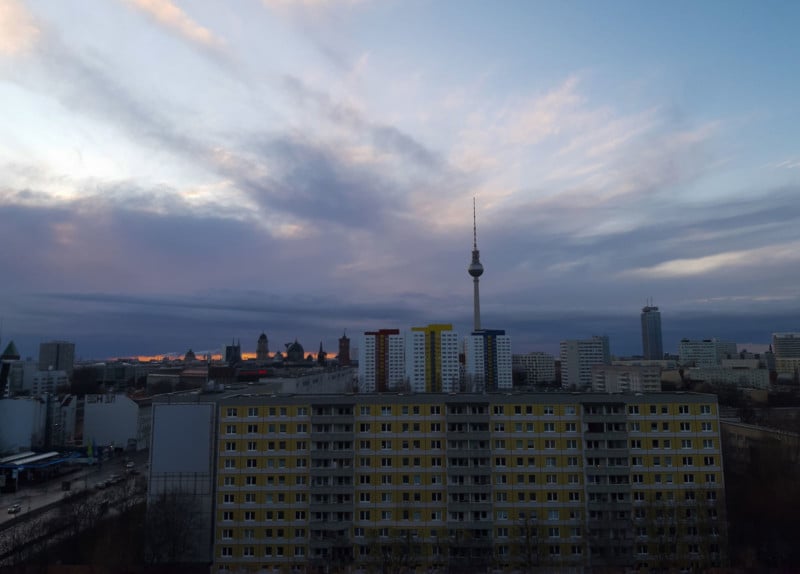 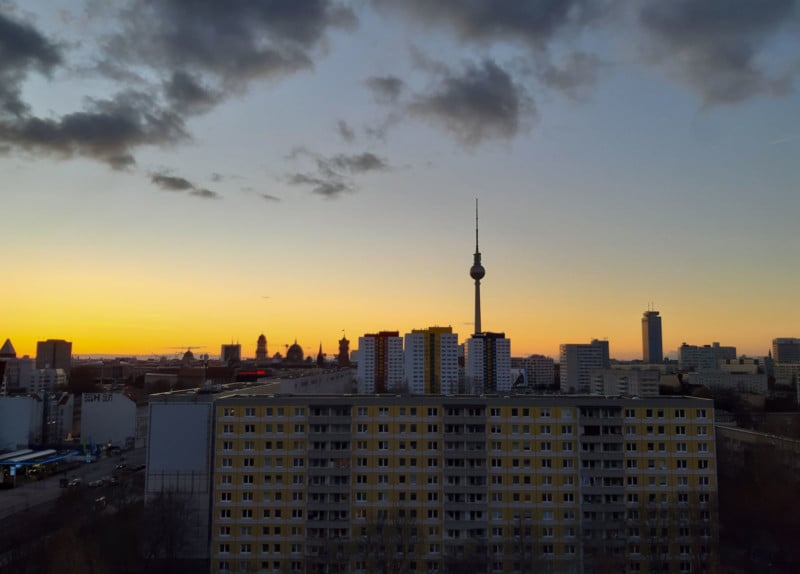 The sunsets are often spectacular. It has been fun documenting the changes I see, whether man-made or nature’s creation.

For example: on normal days huge billboards are displayed on the walls of the buildings in front of my balcony, this area was always filled with advertisements and was never empty. I have noticed that as the restrictions lengthen, the “offline” advertising world loses its power. The billboard was empty for many months.

When an advertisement does go up, it has usually been some government ad about COVID, or something for consumer goods and big retail chains. Regular advertisers just sat and waited or moved their budgets online. 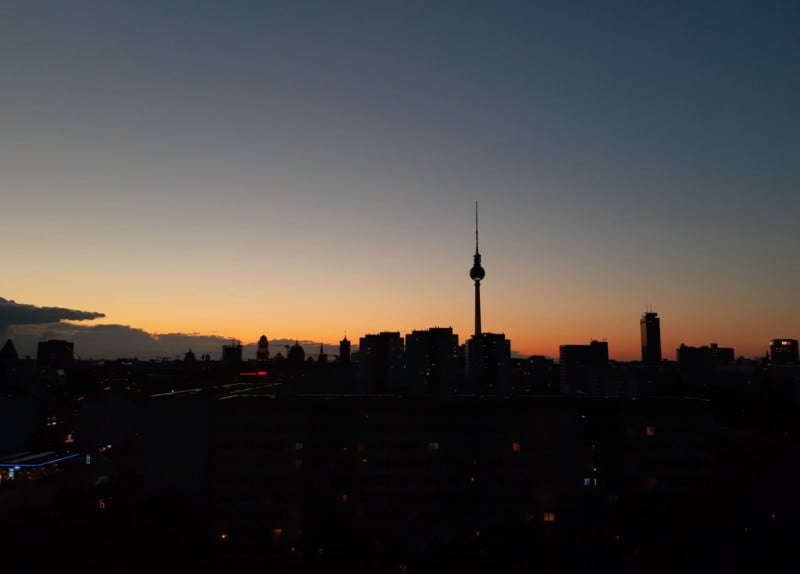 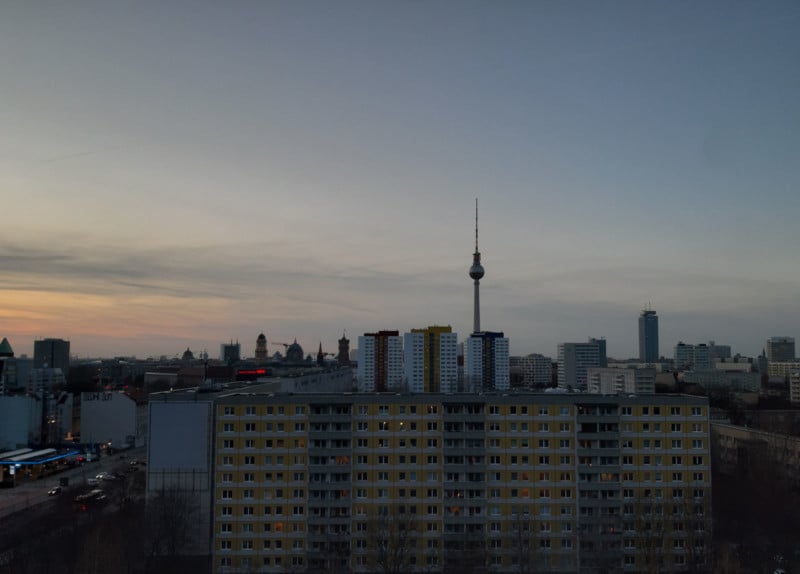 And now for the optimistic side of the project: Berlin in the summer is a special place, and when the visibility is good, a spectacular sunset takes place every evening. It is difficult to illustrate how special the colors and cloud combinations are. It’s a treat for the eyes. And because my cell phone wasn’t always good enough to do them justice, on particularly spectacular days I stole a photo or two also using my big camera. 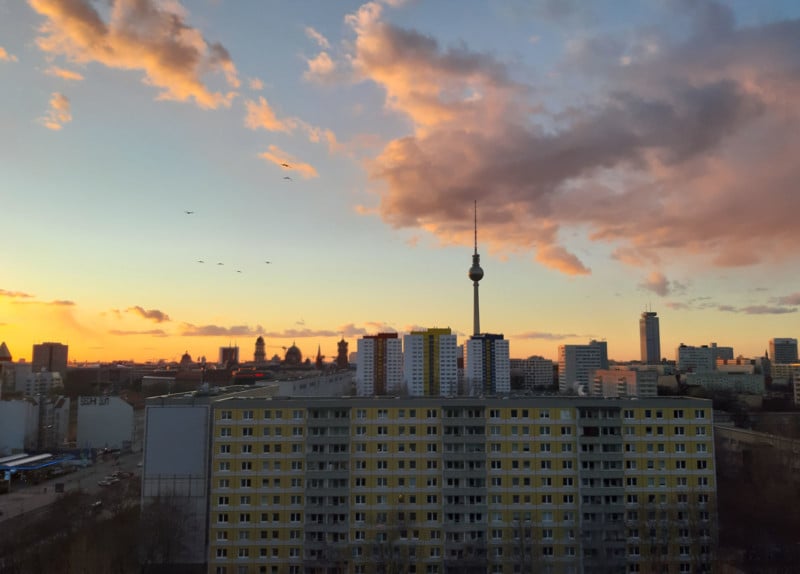 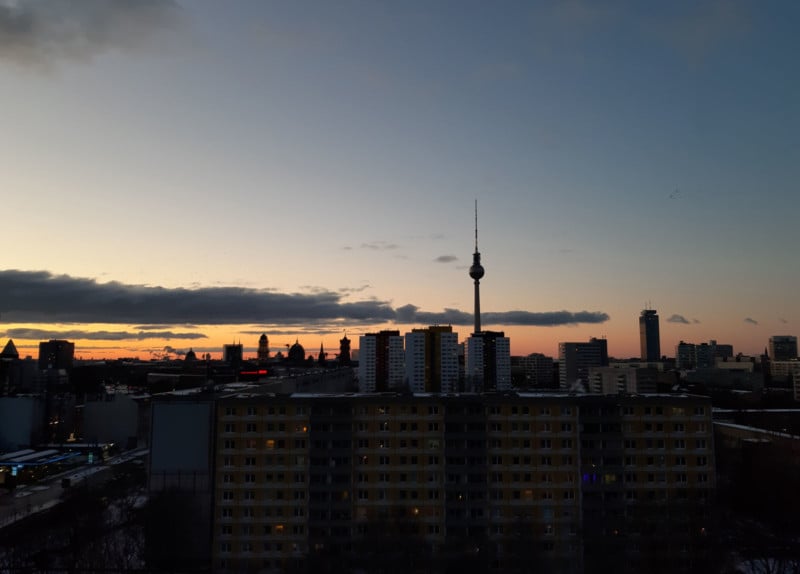 Another positive point I saw was that the construction industry has not stopped working at all. Urban development has continued. Cranes are regularly deployed in front of me and there are dozens of them in the frame. And some of the buildings in the scene have had a floor added to them every day. 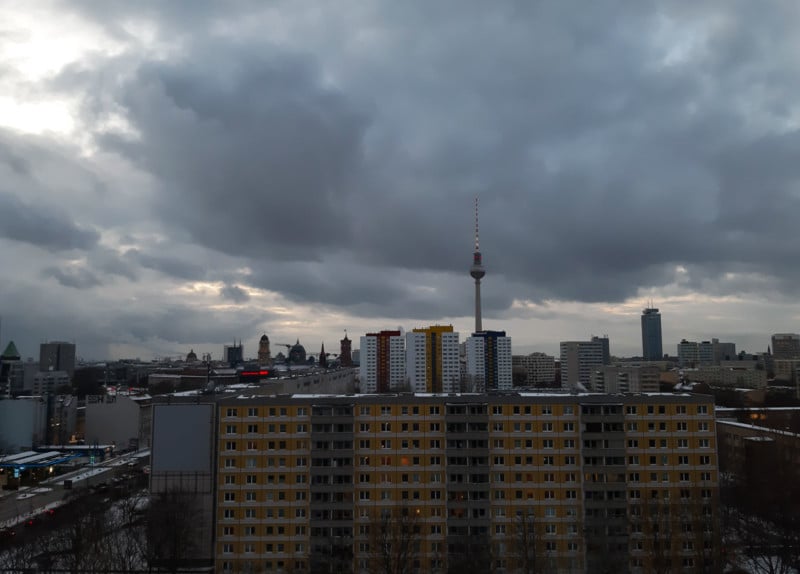 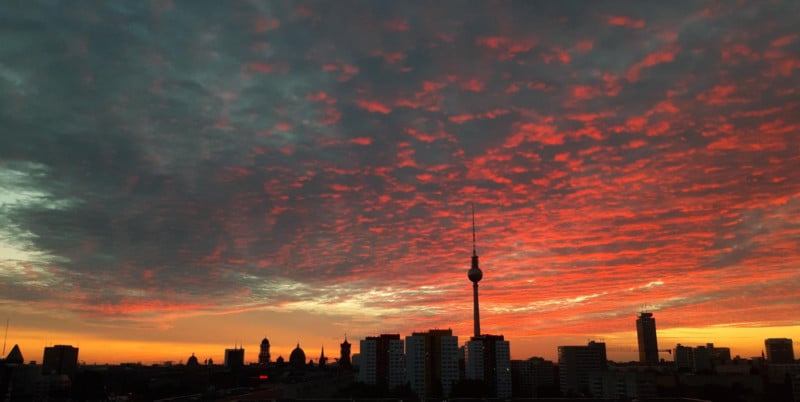 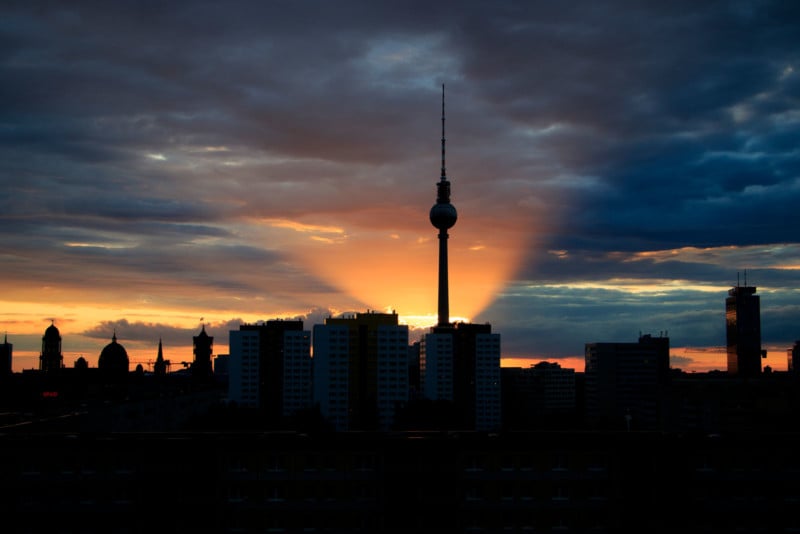 Night after night, sunset after sunset, each with a different story. Today, a year later, a kind of disassembled timepiece has been created, a visual poem for the city of Berlin — lonely but blooming, a city that has certainly known many ups and downs in its history.

A lot has changed during this period in the landscape. It has taught me to remember that we should try to keep up a good attitude and the joy of creation, even in difficult times, and to not forget that the sky’s the limit.

About the author: Ishay Lindenberg is a photographer and visual artist based in Berlin. The opinions expressed in this article are solely those of the author. You can find more of Lindenberg’s work on his website, Facebook, and Instagram.

What It Was Like Photographing March Madness During COVID