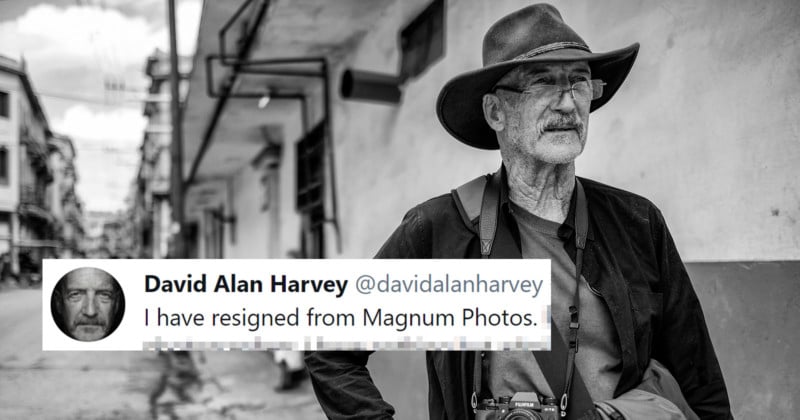 David Alan Harvey, who has been at the center of controversy around images he took in 1989 which may or may not feature underage sex workers, has announced that he has resigned as a Magnum Photos photographer. Magnum had previously suspended Harvey for one year while it investigated a “confidential complaint.”

Harvey has been the subject of scrutiny starting last year when Fstoppers published an exposé that revealed Magnum Photos had been selling Harvey’s photos labeled as “Teenage” “Thai Prostitutes” from 1989.

“The photographs emerged as part of research into the number of results that Magnum Photos website returns when searching for ‘girl’ and ‘prostitute,’” Fstoppers writer Andy Day wrote. “Several images taken by Magnum photographer David Alan Harvey are part of a body of work entitled ‘THAILAND. Bangkok. 1989. Thai prostitutes.’”

It was alleged that these images depicted underage girls and as such their existence constituted an act of child sexual abuse. In response, Magnum Photos promised that it would do a full review of its entire archive of photos. The results of that review were announced to be underway recently and Magnum seemed to clear itself of wrongdoing with regard to these or at least similar images thanks to a partnership and audit from The Internet Watch Foundation (IWF).

We are determined to learn from this and put better protections in place,” Magnum writes. “Whilst the images of children have been legally cleared by the Internet Watch Foundation, we are working hard to fully contextualise work, add appropriate warning information, and put the right levels of access restrictions in place.

Magnum’s announcement that it has been cleared of wrongdoing here was recently called into question. The organization should complete its review later this year.

These images aside, Harvey continued to battle allegations of misconduct. Magnum Photos suspended Harvey in October of 2020 for a “breach of bylaws” and was asked by the organization to engage in sensitivity and anti-harassment training “among other requirements.” The specific reason for Harvey’s suspension was never made public.

Shortly thereafter, a harrowing story published on the Columbia Journalism Review laid out multiple on-the-record cases of Harvey’s inappropriate behavior in striking detail. In response, Magnum opened another independent investigation into those allegations.

The results of that investigation had not yet been revealed, but it appears the situation has finally come to a head, as Harvey has announced that he is leaving Magnum Photos.

I have resigned from Magnum Photos. For the Magnum photographers I have nothing but admiration. I thank my friends who have waited to see and hear the full story. Your trust was not misplaced.

It should be noted that Magnum Photos has not specifically expelled Harvey, which it has never done to any member in its entire history. However, Magnum had concluded its independent investigation earlier this month and following that investigation, Magnum’s Board decided to permanently remove David Alan Harvey from the membership prior to a final vote on the decision by Magnum’s members. David Alan Harvey subsequently decided to resign.

Editor’s note: The original article stated that Harvey resigned prior to the conclusion of Magnum’s independent investigation, but a Magnum representative wrote to PetaPixel that this was not the case, and the reason for Harvey’s resignation was clarified. This has been reflected above.

Beijing Silvermine: Discarded, Unseen Photos of China in the 80s and 90s