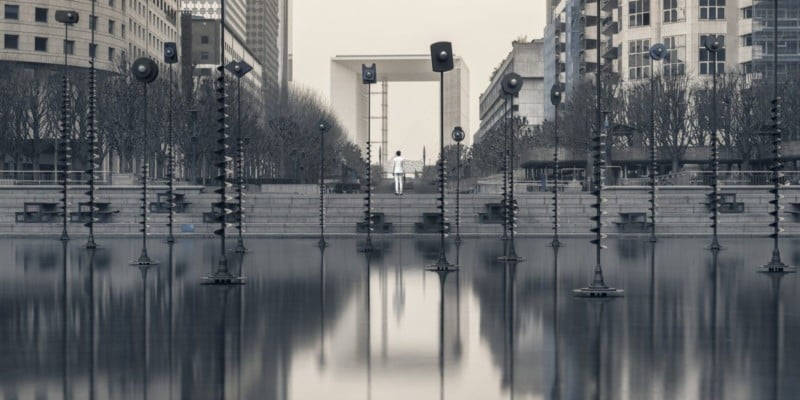 The COVID pandemic has stricken all the layers of our societies, from culture to economy, family life to social events. Nevertheless, this unique situation has also offered unique pictures of places usually crowded and suddenly totally empty, taken by photo reporters.

For my part, as for many of my professional colleagues, I spent many months without taking any pictures, staying at home to slow the spread of the epidemic. I took time to update my website, train myself online, and go back to my previous series. During this last occupation, I realized that one of my last narrative series, titled Urban Echo perfectly illustrates the economic situation at this moment, despite being created two years prior.

What is a narrative series?

How to achieve a narrative series

Finding the story of your narrative series is crucial and should not be rushed. Indeed, the choice of the theme of this story will impact the work of reflection and realization of the series. A theme that is too vague or too broad may lead to a series that is difficult to conclude.

In the case of my series Urban Echo, I wanted to develop the themes of urban and professional loneliness as well as of economic and urban crushing. This story, therefore, defines several parameters for the realization of this series: an urban place (here the district of La Défense, the first financial place of France), the presence of an isolated human subject, and a panoramic format. 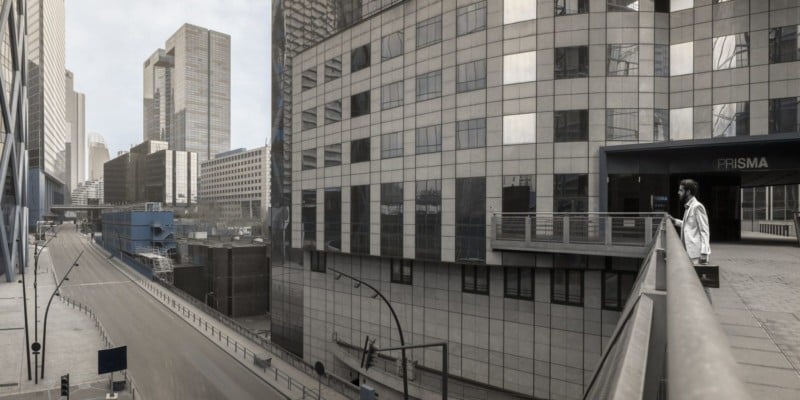 The choice of the ultraviolet photography technique comes just after, to dress the places photographed with a warm and heavy rendering.

Once the first elements of the series are defined, I advise you to put them on paper. Photographic creation does not limit you to your camera: drawings, notes, and diagrams help organize your ideas and develop them as you think about them. Below, here is the notebook from my Urban Echo series: 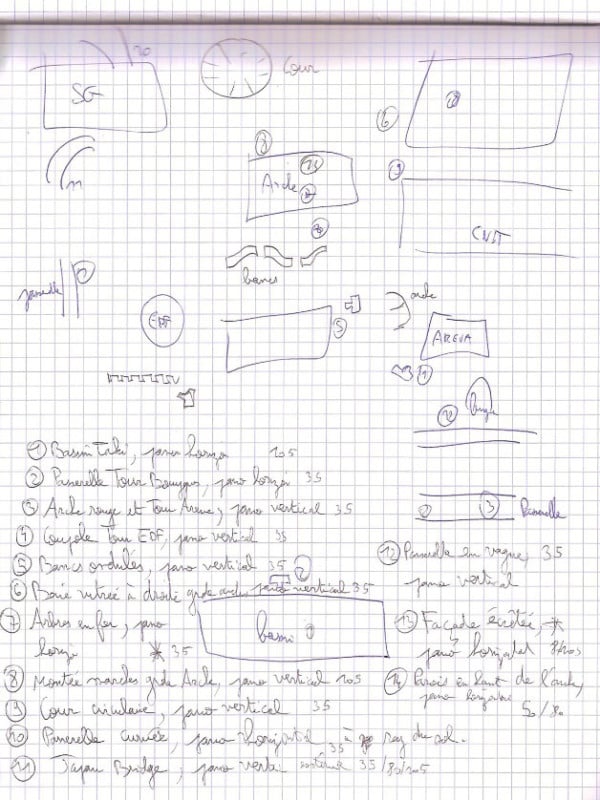 These notes consist of a brief plan of the Defense area and a descriptive list of the scenes to be produced. Thanks to them, I will then be able to locate the shooting locations.

The scouting of the place where your story will take place ensures you a significant time savings on the day of the shoot. During this scouting, you are confronted with the reality of the places of shooting without having to rush nor to deal with a team. You can note the presence of disruptive elements (work, etc.), geographical constraints, or even meteorological criticalities that would also lead you to develop your list of inspirations. Some will be validated, others modified or even abandoned if they ultimately do not correspond to the story you want to tell.

This scouting also allows you to take “rough” photographs of your composition ideas. For Urban Echo, I thus produced 12 panorama essays, focusing only on the framework of the compositions. 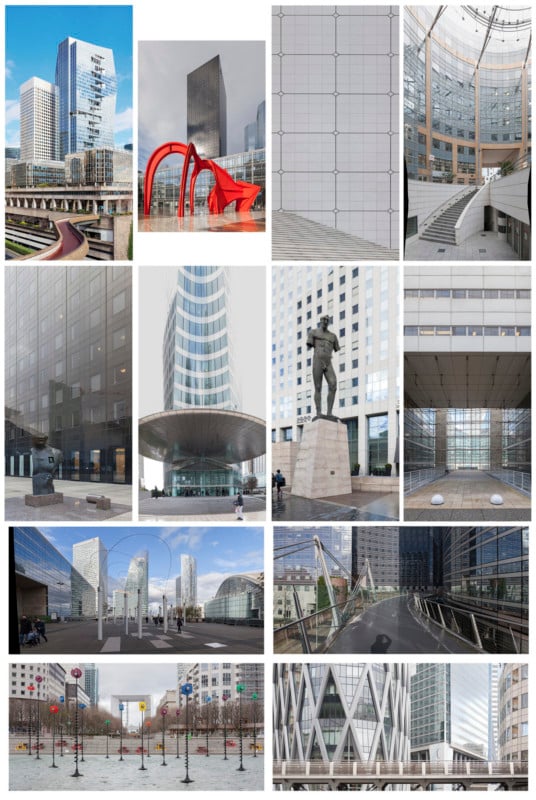 This step is optional, as the production of a narrative series does not necessarily require the intervention of other people. For Urban Echo, I stage a model in different urban compositions. Here I have chosen one model from my directory with whom I have already collaborated, to ensure good communication during the shooting.

This step is the most fun and enjoyable: you will finally be able to photograph! And in the best conditions! Do not hesitate to take more shots than indicated in your notes, or even experiment with new compositions. For Urban Echo, the shooting took place over one day, but you may also have to shoot for several days. Set yourself a clear schedule to keep a good pace of creation. 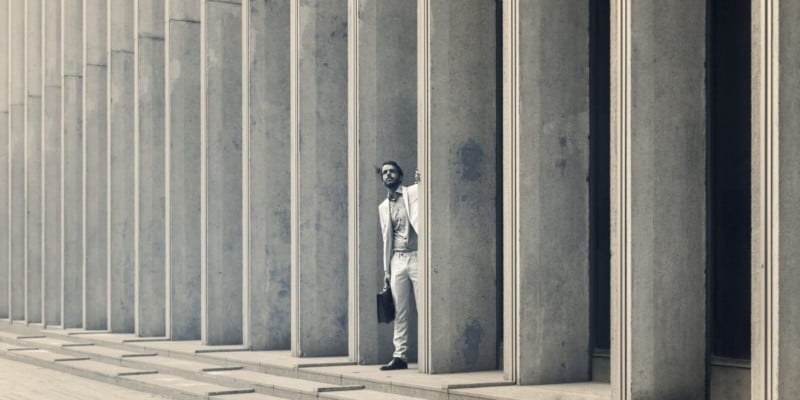 Sort and process your files

Once the photographs are taken, comes the step of sorting and digital processing. Generally, I process in two stages: a first overall pass, then a second pass for more precise adjustments. The common thread of your story is starting to be visible. Make sure the rendering is consistent between each photograph, as the evolution of shooting conditions may impact it.

Select and classify your final pictures

Now you have a coherent set of photographs that respond to your initial theme and shapes your story. The last point asks you to take a step back to select from among the photographs processed those that have the most strength, the most impact, the most legitimacy to be included in your series. The goal here is to avoid repetition. Take the time to think about it, let your photos sit for a few days before returning to them with a fresh look.

Finally, organize your photographs to create a logical story. The shooting timeline does not necessarily follow the timeline of your story. For my part, I have selected 8 photographs for Urban Echo, to discover below: 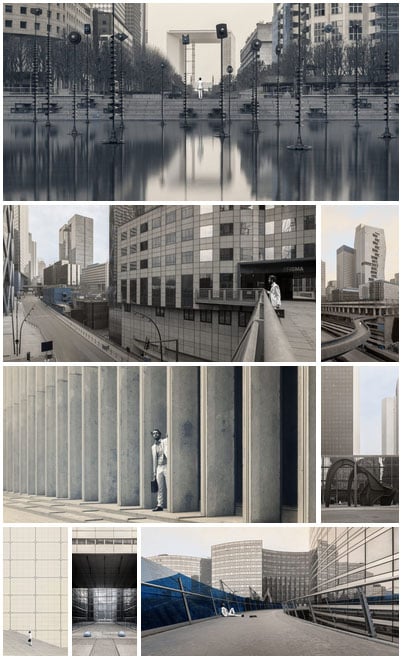 This series presents an alternative and graphic urban environment in which a single human subject evolves. Through eight successive pictures, this man is confronted with enormity and isolation, reduced to the scale of an ant moving between titans of concrete and steel. The atmosphere is heavy, gradually leading to anguish and resignation.

The themes discussed here are twofold and complementary: professional and urban individualism leading to solitude through the immaculate man on the one hand; submission to industrial and financial groups, economic and all-powerful giants, on the other hand.

The choice of the panoramic format, here at 2:1 ratio, reinforces these themes by offering an extended field of vision. The resulting stretch amplifies the contrast between the human scale and the urban scale, and hence the feeling of fragility.

Two years after: how this narrative series illustrates a real situation

As explained before, Urban Echo deals first with professional isolation and dehumanization of the economy. It is fiction, a staged story aiming to illustrate an idea. However, in some points, this fiction has become true through the COVID pandemic. Indeed, the financial area of La Défense was empty for many months due to telecommuting. A lot of workers in these offices have suffered from isolation, hopelessness, and depression, facing the limits of the economy.

This is the power of a narrative series: as it is not based on a concrete and factual situation, it can cover the news over the years if the topic of its story becomes real.

About the author: Pierre-Louis Ferrer is a professional infrared photographer who aims to reveal the world beyond the visible. The opinions expressed in this article are solely those of the author. To learn more about infrared photography, you can take his infrared workshop in Paris. You can find more of Ferrer’s work on his website, Facebook, and Instagram.

How to Pronounce German Camera and Lens Brands ‘Correctly’