I’m photographer Jay P. Morgan from The Slanted Lens. In this video and article, I’ll share with you an actual photoshoot fraud case and what to look for so that you don’t get taken by a fraudulent scam like it.

I’m thinking, “What’s a fashion shoot?” And the money was standard (okay, not great). But I started exchanging emails with this individual. Let me set out exactly how they set this fraud up and exactly what they did. Let’s take a look at it. 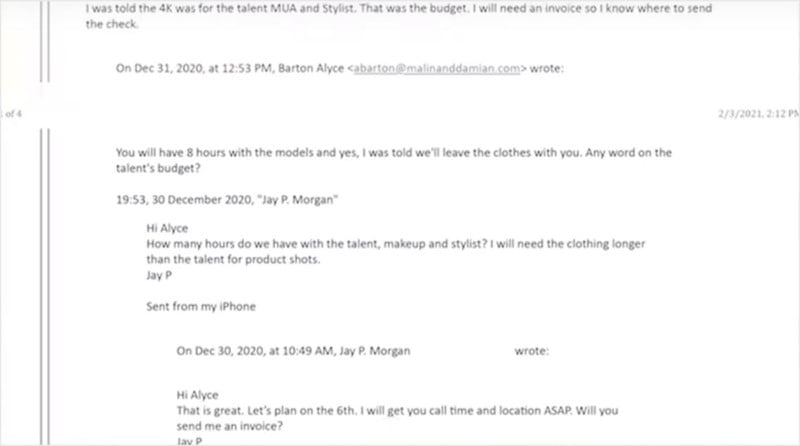 It’s amazing how elaborate this was. I got a complete breakdown on the shoot. There was to be one outfit per model, five images of the models together, outfits and wardrobe will be supplied by us. They sent a complete breakdown of the kind of images that they wanted. The photographer’s compensation was $4,000. The talent fees were $4,000. 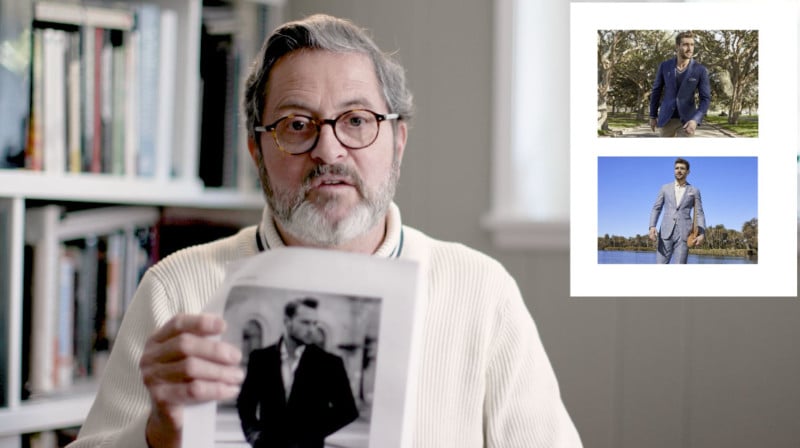 And then it goes on and on and on. And they sent a contract as well — one that just talks about reshoots and loss of damages. I mean, it’s a pretty typical contract. Someone’s pulled this somewhere from the Internet. 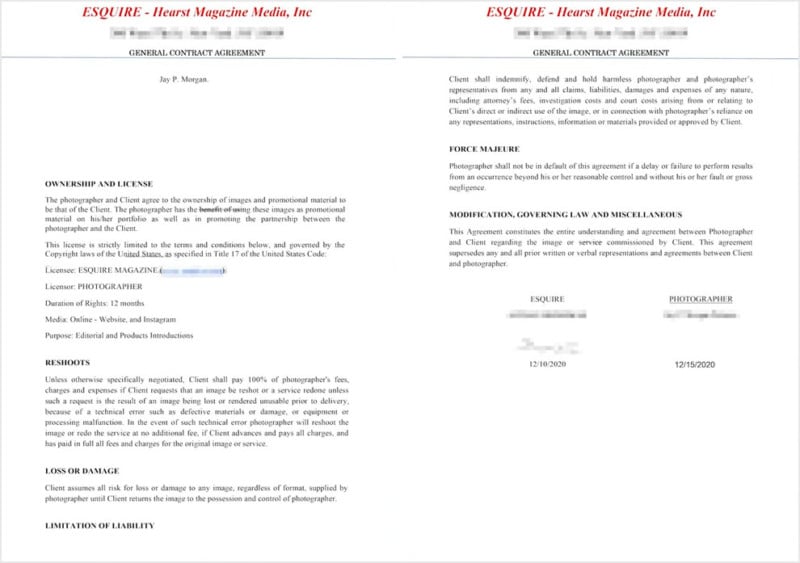 The contract goes through the compensation, saying how much you’ll make and how much you have to pay the talent. It’s all in the contract that you pay the modeling agency the $4,000, and then it has a place to sign on the bottom to send it back into them. I was dumb enough to sign it and send it back after picking a date for the shoot. I’m trying to get this stuff done and it out of here. 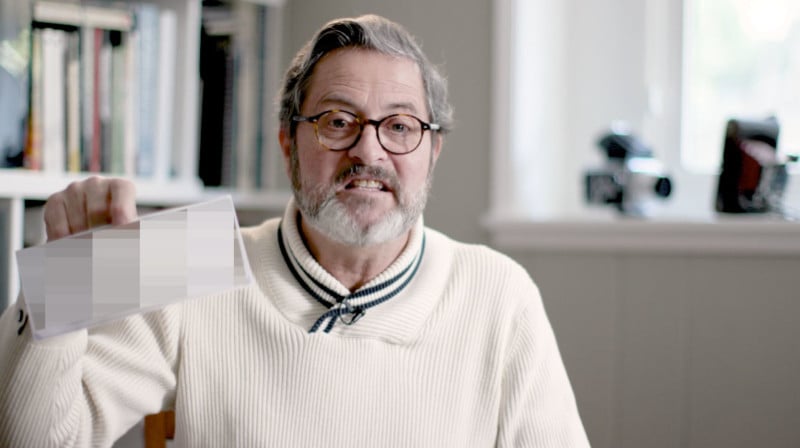 So, they shipped me a check. And the check is just bizarre. It’s a check for $6,000. But then the person started emailing, so now I kind of knew what was going on and I start pushing them. 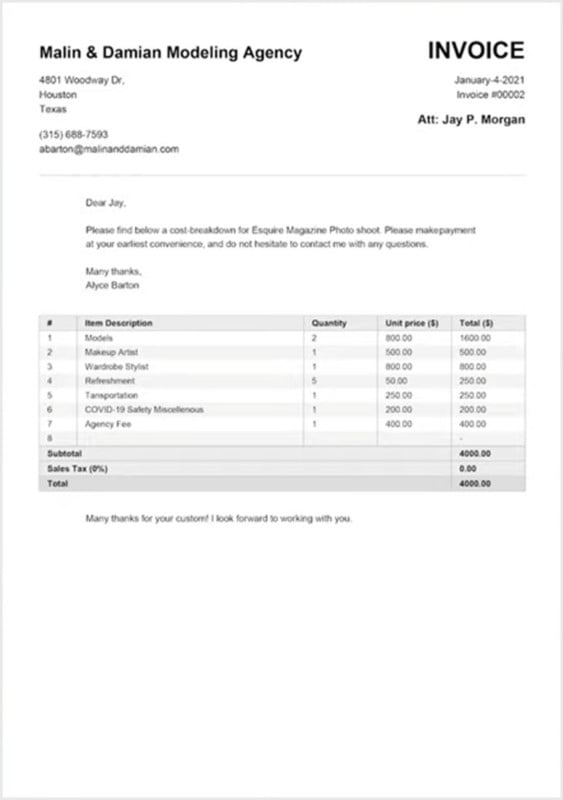 I said, “Where do I send the money?” It just kept going on and on. They tried really hard to get me to send a check to the modeling agency, the $4,000. The agency was not in Los Angeles, and it was not an agency that I had heard of before.

So there was a red flag. I know the agencies that are in LA. It’s not hard too hard to verify them and to call them up and to see who’s there and look on the website and see who the agents are.

It also happened over a holiday, which is a prime time because you’re in the midst of taking time off.

And it’s hard to get ahold of people a lot of times so you start to justify why this person isn’t responding or why it’s getting hard to be able to put this together. Just know if it’s over a holiday weekend, if it’s needing to happen fast (like “we need to have the shot by next Tuesday”), that kind of pressure coupled with the fact that I can’t get an art director on the phone just means it’s fraud.

Offers Outside Your Area of Expertise

First off, if it’s not your style of work, then it’s probably a fraud. If they send an email saying we really want you to do this high-end fashion shoot and it’s not the kind of work you do, it’s probably fraud. But they may be smart enough to send it to someone who does do fashion. And you really want a job and now you kind of start to fall for it a little bit.

Refusing to Communicate by Phone

Another red flag is they won’t get on a call. You know, almost every creative process I’ve ever been in, you get on the call with the art director, you talk about the project, you get a really good idea of exactly what they want.

Another red flag is when they want your bank account information. They either want that so they can get access to your account, or they want you to give a verification that you’ve deposited the check.

And that gives them this window where they know that they can get you to send money to somebody else because you think you have the money. And the check hasn’t bounced yet. They went so far as to send me a check from a homeowner’s association in Florida. When people start pushing for bank account information, that’s absolutely a red flag.

Step Out of the Loop

I have heard of scenarios where they do get you on a call. They have a conversation with you where they talk about the project, and it’s all working. The way you can get around this is you just have to do some research. If the person gives you a number, get out of their loop. They want to keep you in a loop, a closed loop with their email and their phone number. They want you to be all in that loop.

I’ve heard of elaborate situations where they get you on the phone, they get you out on the project and you start spending for everything. And then pretty soon you’re giving money to all their friends and you get defrauded like that. So make sure you get outside of the loop and figure out if it’s real. It’s really important to do.

So there you have it. Florida man almost defrauds us over at The Slanted Lens. So if you have any of these situations that have ever happened to you, leave them in the comments below. I’d love to see anything or hear about anything that’s ever happened to you. Share with our community because it really helps everyone to know what’s going on out there and how they can protect themselves.

The X-tra Battery Kickstarter Campaign May Have Been a Scam