As part of a new “shark mitigation program,” the organization Surf Life Saving NSW has begun operating special safety drones in 34 locations across New South Whales. Recently, one of these drones captured an extremely close encounter between pro surfer Matt Wilkinson and a nearby shark, warning him from above just as a shark was closing in from below.

You can see the close encounter for yourself in the video above, published by Surf Life Saving NSW last week. The video recounts the events of that day, explaining how UAV operator Beau Monks spotted the shark during a “routine surveillance flight,” and used the onboard speaker to broadcast a warning message.

“I was surfing out the back at Sharpes Beach and just cruising on my own and I heard a splash and a noise and looked around and couldn’t see anything. Then the drone came down and told me that there was a dangerous shark in the area, return to the beach,” recalls Wilkinson. “I got to the shore feeling a bit weird and the lifeguards showed me the footage and I realised how close it came without knowing it was there. It looks like it’s going for my leg and it’s changed its mind.”

“It sort of came out of nowhere, then went right up to Matt. It moved pretty fast,” recalls Monks. “I was tracking it and notified the lifeguards and used the speaker on the drone to get everyone out of the water. Within 10 seconds it was at the surfer and five seconds later it was gone.” 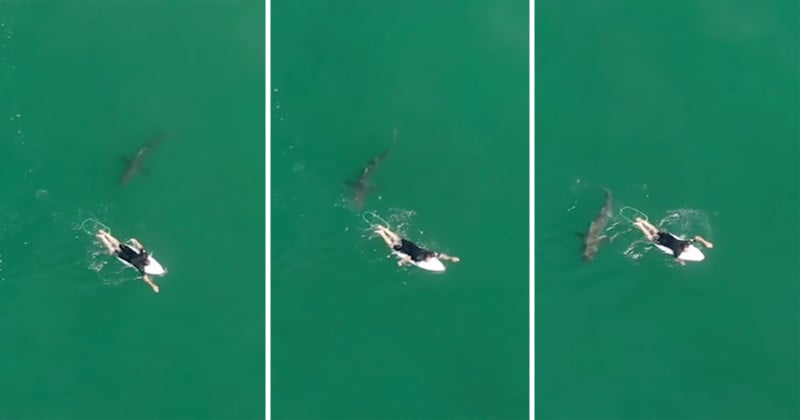 While we can’t be sure that the drone did anything to affect this particular encounter—it seems that the drone’s warning came after the shark decided on its own to change course last minute—the audio warning and subsequent evacuation of the beach may have helped prevent one of those rare-but-terrifying encounters that tend to make headlines.

This is less about creating the impression that sharks are dangerous and inclined to attack humans, and more about preventing accidents where a shark might mistake a surfer for a seal. It also shows at least one use of drone cameras that the public would probably welcome.

“It’s nice to know the drones go up and down the beach and can see what we can’t and it makes you feel more comfortable,” says Wilkinson. “I’ve been surfing with sharks my whole life and I understand they’re there and know enough about them to know they have not too much interest in humans. I’m just glad today the shark reconsidered at the last second.”

Click play on the video up top to see the encounter for yourself. And if you want to see a more artful (and less terrifying) bit of shark drone photography, check out this award-winning photo of a shark swimming through a heart-shaped school of salmon.

Why Do Bad Photographers Think They Are Good?