Kodak’s stock price has gone on quite a roller coaster ride over the past week after the company announced a $765M US loan to pivot into generic drug production. But it’s not just the price people are talking about — unusual trading activity and a stock option grant to Kodak’s CEO are also making headlines.

Kodak announced on Tuesday, July 28th that it had secured a massive loan (worth multiple times its market valuation) from the US government to begin manufacturing ingredients used in generic drugs such as hydroxychloroquine (the anti-malarial drug touted by President Trump as a treatment for COVID-19).

Investors responded by sending the stock from around $2 to a high of $60 in the following 48 hours. The stock has since steadily fallen and sits at around $15 at the time of this writing. 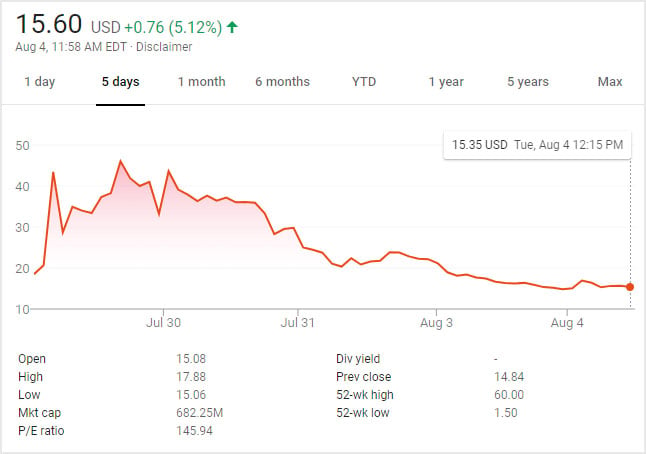 As news sent the stock soaring, however, some people noticed that Kodak’s trading volume had actually begun climbing on Monday, the day before the news was officially out. 1.6 million KODK shares changed hands that day while the average from the prior month had been around 230,000 shares per day. The stock price also jumped 25% that day.

"This has been a pretty tight kept secret … I couldn't tell you what influenced that or didn't," says Kodak CEO James Continenza on the high trading volume in the stock Monday, before Tuesday's news. pic.twitter.com/Jr4w8QRlMp

The Wall Street Journal suggests that a contributing factor was likely Tweets and articles that were published (and mostly since removed) by reporters in Rochester, New York, Kodak’s hometown. Two reporters Tweeted that Kodak was launching an initiative with the US government in response to the ongoing COVID-19 pandemic, and an article Monday by a CBS affiliate stated that Kodak’s pivot “could change the course of history for Rochester and the American people.”

“This is just the latest example of unusual trading activity involving a major Trump administration decision,” Warren writes, though she acknowledges that the Monday leaks could explain the trading volume jump. Still, she questions whether the too-early news reports could have come about through violations to SEC rules regarding the disclosure of material information.

The New York Times reports that on that same Monday, Kodak CEO Jim Continenza received 1.75 million stock options from the company that allow him to purchase KODK shares at prices between $3.03 and $12.

When Kodak shares surged, those options were suddenly worth quite a pretty penny — roughly $50 million at one point, according to the Times.

What’s also interesting is the fact that the option grant wasn’t mentioned in Continenza’s employment contract or made public beforehand. CNBC reports that it was simply based on an “understanding” with Kodak’s board.

“The decision to grant Continenza options was never formalized or made into a binding agreement, which is why it was not disclosed previously, according to the person familiar with the arrangement,” CNBC writes. “The options were granted to shield Continenza’s overall stake in the company from being diluted by a $100 million convertible bond deal clinched in May 2019 to help Eastman Kodak stay afloat, according to the person’s account.”

“On May 20, Kodak handed out 240,000 stock options to board members — an addition to its usual equity distribution in January,” the Times reports. “The May stock options awarded to directors are now worth about $4 million. Those options are eligible to be exercised gradually over the course of this year.”

A Kodak spokesperson also tells the Times that Continenza’s new options “are paper only” and that “Mr. Continenza has not received any proceeds nor does he have any intention of selling.”

Update on 8/5/20: The Wall Street Journal reports that the Securities and Exchange Commission has opened an investigation into the circumstances surrounding the loan announcement.

This is How Adobe’s Upcoming Photo ‘Authenticity’ System Will Work