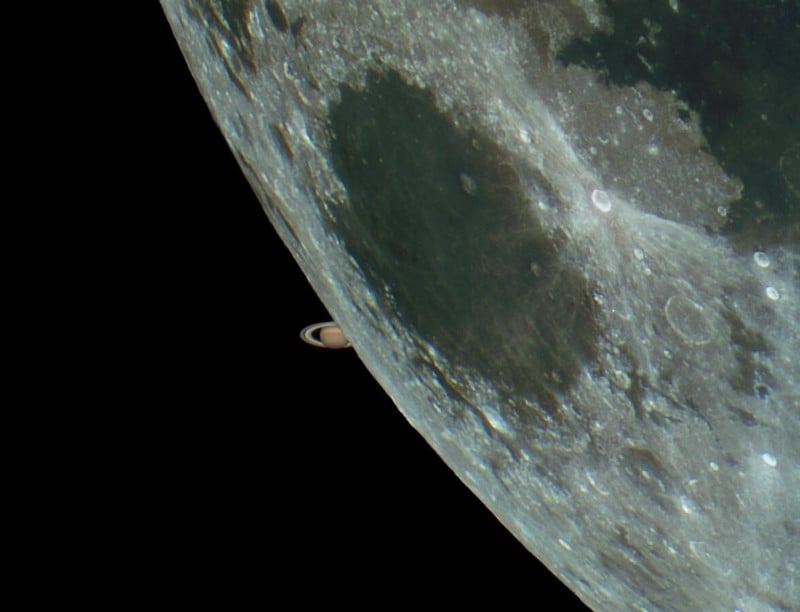 Want an astrophotography challenge that doesn’t come around very often? Try photographing Saturn peeking out from behind the Moon.


Amateur astronomer and astrophotographer Paul Stewart of Timaru, New Zealand, managed to create the beautiful photo of just that back in 2014.

The photo is a composite of three photos. Stewart first captured a base photo of Saturn emerging from behind the Moon. Stewart then exposed Saturn and the Moon separately in subsequent photos. Finally, he composited the properly exposed objects onto the base frame to bring out the details of each.

“It is a bit of a cheat but because of the high surface brightness of the Moon and low brightness of Saturn, it’s impossible to get a good image of the occultation with just one shot,” the photographer tells PetaPixel.

If you’d like to try creating your own version of this photo, you’ll have to do some planning and possibly quite a bit of waiting and traveling. The International Occultation Timing Association provides predictions on where and when upcoming planet occultation by the Moon will occur.

“Somewhere on Earth a Saturn Moon occultation can be viewed on average every 168 days,” Stewart says. “But there can be gaps of up to 5 years.”