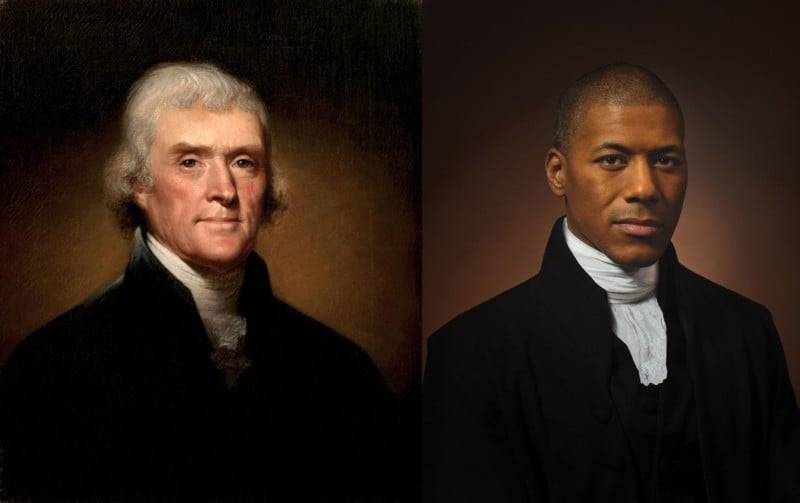 Photographer Drew Gardner has been recreating portraits of some of history’s most famous figures by finding and photographing their direct descendants. One of his latest recreations features Thomas Jefferson’s sixth great-grandson.


While he has been working on a personal project titled The Descendants, Gardner was recently commissioned by Smithsonian magazine to recreate portraits of famous American historical figures.

A history buff, Gardner does in-depth research tracing direct descendants and verifying their lineage. He then carefully sets up portraits to recreate well-known paintings and photos as faithfully as possible, from period costumes to props to the backgrounds. He also does his best to match the lighting seen in the original portraits.

The six-times-great-grandson of Thomas Jefferson that Gardner photographed was Shannon LaNier, who works as a television reporter at CW39 in Houston, Texas.

The recreation was based on the famous portrait of Jefferson by American painter Rembrandt Peale, and Gardner shot his portrait using a Fujifilm GFX 50S and a Zeiss Otus 85mm f/1.4 lens.

“He was a brilliant man who preached equality, but he didn’t practice it,” LaNier tells the magazine. “He owned people. And now I’m here because of it […]

“I didn’t want to become Jefferson.”

You can watch a 3.5-minute behind-the-scenes video showing how this portrait was shot. You can also find more of Gardner’s recreations on his website and Instagram.

Image credits: Photograph by Drew Gardner and used with permission