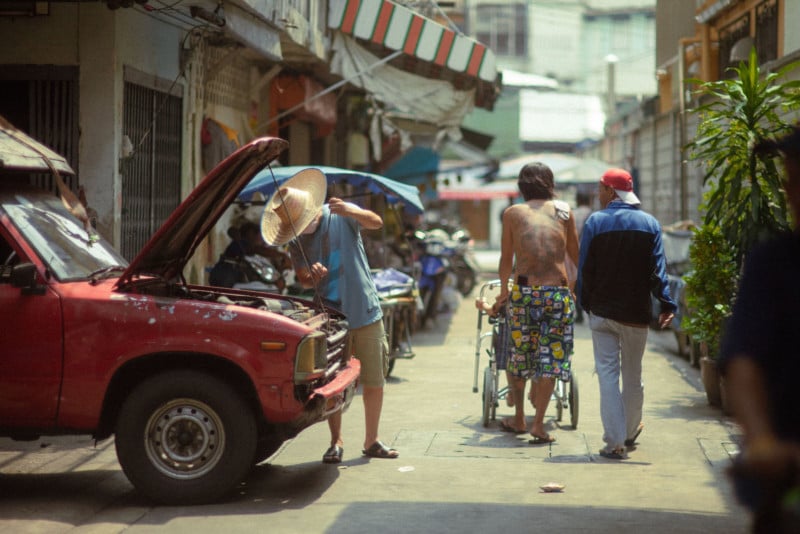 The image above was shot in one of the old town lanes around Pom Prap in Bangkok in October 2019 using a Nikon F3 analog SLR camera loaded with Kodak Ektar 100 expired film roll.

The image below was shot in Khao San Road with a Kodak Portra 400 roll pushed to 800 (for night photography). 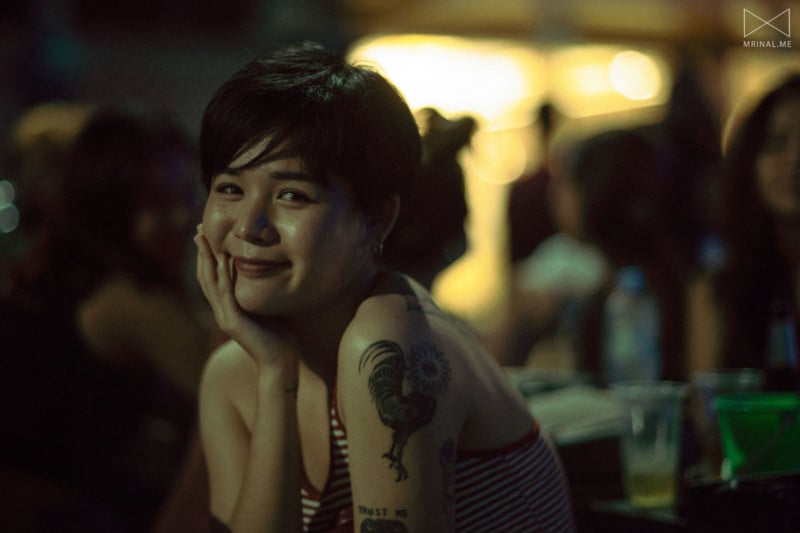 Both rolls were developed at home using a Tetenal C41 Kit.

Now, I could be fooling you about this entirely when I may have actually shot this on a digital camera and later used filters to achieve the so-called “film look”. But who can tell except the few who understand the difference between film grain and digital noise? “Looks like film” is an ever-growing trend and a popular hashtag for digital images that ape that vintage film look. But why would anyone do that when film is still available?

Let me restart this article by making an honest confession. These images were indeed shot on a DSLR and retouched to get the results you see here. Yes, I have simulated the film look and even added grain on purpose to fox the reader and put the context in place, intending to reason why the contemporary practice of emulating film on the digital format is like making tofu out of milk.

Let’s “say cheese” for a moment here because film is readily available. Fudging the vintage look on digital discredits both formats. But hey, that is exactly what I used to do up until a few years ago and hence this article to share my opinion on this matter.

In the year 2000, I got my first analog camera when my brother’s friend donated me a Zenit 122 SLR with two lenses. This is right around the time when the emulsion market was being wiped out. Film labs everywhere were shutting down and the trend was moving rapidly towards digital in movie making and photography.

By 2002, I had joined an advertising film production house in Bombay, and by 2003, I had already forsaken the Zenit camera. Film is dead, I was told, and indeed pixel was the new grain everyone was eager to learn everything about. All through the first decade of the 21st century, film cans were being removed and shelves were being piled up with Digi-Beta tapes followed by HDDs, while photographers had replaced film rolls with SD and CF cards.

Kodak Labs by now were now only printing digital images. The rapid development in digital tech (software and hardware) with stunning results and endless possibilities had pushed film out of the market. By 2010, only a handful of film enthusiasts were shooting on this medium.

However, from the time film emulsion was discovered, popularized, and refined to its current standards of look and precision over 100 years, it had set the native color grades to such high standards that the “film look” had its hangover on users who naturally started mimicking the film look at the dawn of digital rather than working with a fresh template.

There were imitation filters and preset for motion and stills alike to the extent that a popular color grading pack meant for the booming video industry had their grading presets literally named after different film stock emulsions known for their particular looks. Ciné grade literally meant the film look and digital was in its cosmetic clutches.

This hangover was thankfully overcome by the freshness that digital created for itself and the credit for that goes to the younger generation that embraced it without looking back. However, the trend to fudge film continued to dominate and the hangover became more intense.

By 2015, I was shooting stills avidly on my DSLR and on my phone (of course). I spent hours working on these images on my lap/desktop and further on my phone before sharing them out. Bundles of presets were purchased and installed to emulate the emulsion look.

Suffering from the proverbial hangover, I continued for a while up until sometime in 2016 when I had a serendipitous rendezvous with film again. I was seeking to buy some lenses and realized that buying vintage manual focus lenses made more sense considering the quality of the glass and also that I could use those lenses for my video work. Besides, electronic lenses were astronomically expensive.

My search led me to an amazing set of Nikon F mount lenses that were in great condition. They came along with a Nikon F3 SLR and a bunch of cool accessories. So here I was sitting with legendary Japanese glass and a Nikon F3 without any film. Fortunately for me, I had recently met up with a Goa-based photographer, Edson Beny Dias, who sent over a bunch of expired Ilford HP5 B&W and Agfa Vista color film rolls.

It took some courage for me to restart an old practice that I had quit completely and forgotten the know-how of. I made many mistakes initially where sometimes entire rolls of film were wasted because I did not load them correctly or forgot to change the ISO settings. But the joy of seeing the results that came out well was incomparable to the butter smooth digital tech.

I was now making pictures instead of taking them. Moreover, I had not much to do after shooting the images. Processing the film rolls was the only post-production required. Initially, I gave the film rolls to a lab but slowly started developing them on my own, again thanks to Edson, who taught me the process.

Soon I procured a digital scanner and voila, I had the whole chain linked. My journey from emulating or fudging film to actually shooting on film, developing the rolls, and scanning images have since, become the most therapeutic practice for me.

If the reader has made so far in this article, here is some unsolicited advice for the initiated. If you really want your images to have the film look, don’t fudge. Just shoot film and experience the real magic of emulsion — a light-sensitive chemical solution.

Every film roll is indeed holding a genie in a tin can and to bring out the genie makes a person nothing short of a magician. From loading the film roll into the camera to winding it back and removing it is a unique experience by itself and shooting on film is even more exciting. It means that the photographer has carefully and deliberately exposed the subject onto the emulsion and formed an image that does not “show” itself immediately (let’s call this the “prestige” of film magic).

Unlike in digital photography, where the photographer is often chimping or constantly looking back at what is shot and sacrificing the creative flow, analogue photography makes the photographer slow and certain with a blind faith in his own skills, a confidence that rapidly grows with practice. The latent images hidden in the exposed film roll are “revealed” only after the film is developed (or mixed with appropriate chemicals like developer, fixer, etc.) in a light sealed tank using a precise recipe.

But the genie is not yet completely out of the bottle because the revealed image is only the negative and will further need to be either printed on a photo-paper using a darkroom enlarger or more popularly, digitally scanned. All these processes are simple and each process by itself is like taking a voyage to the island of serendipity on a sailboat steering through the waves and wind.

In the end, allow me to say that by no means is this article an attempt to take a pot shot on digital photography or on those practicing it. In fact, I think the advantages of digital technology far exceed what film delivers and undoubtedly, the future is digital.

But going by the history of photography itself, since the time of its inception in 1839, no one method has ever attempted to emulate the other. So this practice of fudging the film look on digital is really an anomaly leading to the untimely mutation of film. So, consider this to be only a conversation starter on why one should just shoot film instead of fudging film. Moreover, it gives digital art a bad name, because analog film is digital too eventually since everything is shared online.

Another argument in favor of digital photography is that the journey of photography itself has been oriented towards it becoming democratic, starting from being a super niche process with bulky cameras involving painstaking processes only a few could afford, moving on to the invention of celluloid (silver gelatin) films boxed in shippable Kodak cameras for the masses, to the invention of a digital sensor and the smartphone revolution that has placed the magic of photography literally on everyone’s palmtop.

That is nearly a 200-year-old graph and in my view, all processes and methods must be respected and practiced individually. Why ape the film look on digital when you can shoot and practice it?

I end with the hope to have not opened a can of worms here but have sincerely attempted to deliver the talisman of magic that is contained in a film can.

About the author: Mrinal Bahukhandi is a photographer and film director based in Bombay, India. The opinions expressed in this article are solely those of the author. You can find more of Bahukhandi’s work on his website, Vimeo, Facebook, Twitter, and Instagram.