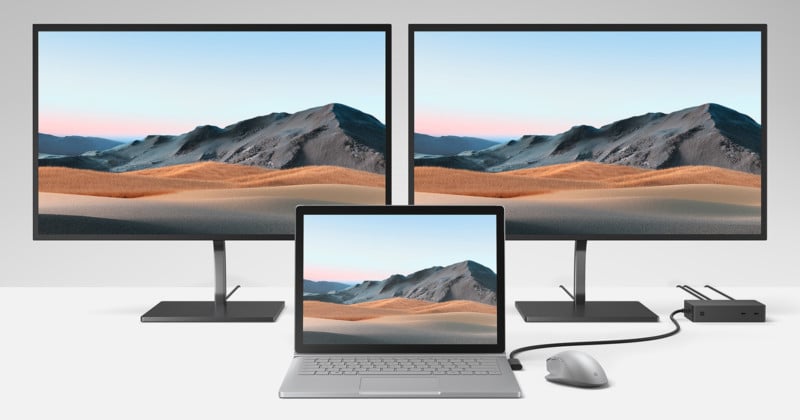 Microsoft went on an announcement spree today, unveiling a new Surface Go, Surface Headphones, Surface Earbuds, and even a Surface Dock. But the coup de grâce, at least for photographers, is definitely the Surface Book 3: a powerful new high-end laptop targeted at designers and content creators.

The Surface Book 3 comes in 13-inch and 15-inch variants that will compete directly with Apple’s MacBook Pro lineup, as well as the latest laptop PCs from companies like Razer and Asus. All of these brands tend to offer a dynamite combination of hardware and build quality, and the Surface Book 3 is clearly trying to play in that side of the pool.

Here’s a quick video intro from Microsoft that covers the basics:

Internally, both sizes of the Surface Book 3 can be configured with 10th-gen Intel Core CPUs and discrete NVIDIA graphics, although some of the key specs are a bit disappointing.

So far so good—this sounds like a reasonable competitor to the new 13-inch MacBook Pro, especially when you consider the fact that Microsoft gives you a removable touchscreen display with pen support out of the box. The option for a discreet graphics card is also nice at this size, and the advertised 15.5 hours of battery life far surpasses the competition. 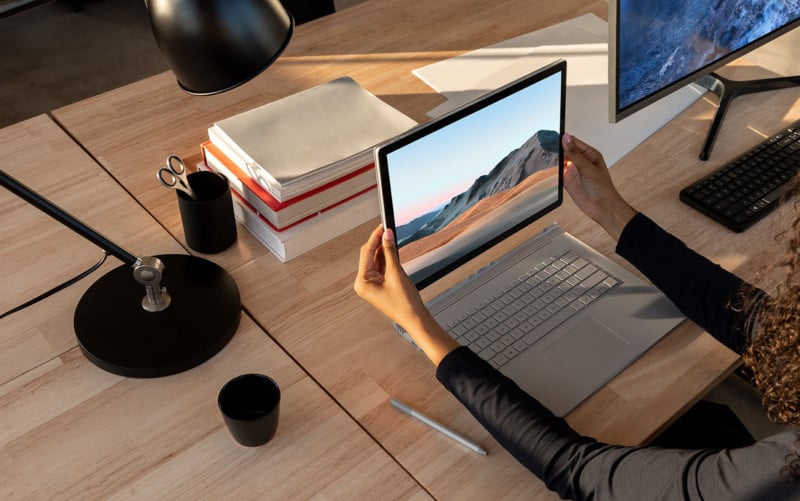 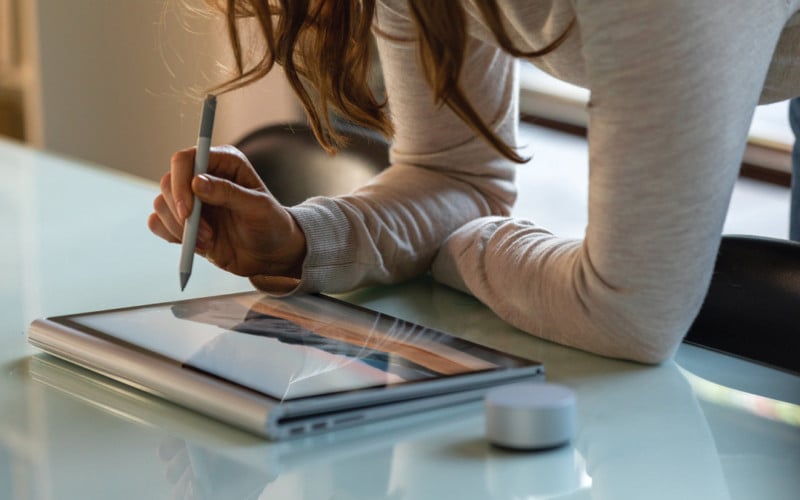 Where the Surface Book 3 falls decidedly behind is at the high end. The 15-inch variant does not support the latest 6-core or 8-core CPUs. You’re stuck with a single option: that same 10th-gen 1.3GHz quad-core Core i7-1065G7 CPU from the 13-inch model, which can be paired with either a GTX 1660Ti Max-Q or a more powerful Quadro RTX 3000 GPU.

RAM maxes out at 32GB, and storage maxes out at 2TB. Battery life, however, is an advertised 17.5 hours “of typical device usage” when connected to the keyboard base, which again, seems wild but definitely plausible based on reviews of the Surface Book 2.

No color accuracy info is given about the PixelSense displays used by both models, but they both feature over 260 PPI worth of resolution in a 3:2 aspect ratio, with an advertised contrast ratio of 1600:1, so we have no reason to doubt that these will be up to tackling creative workflows. 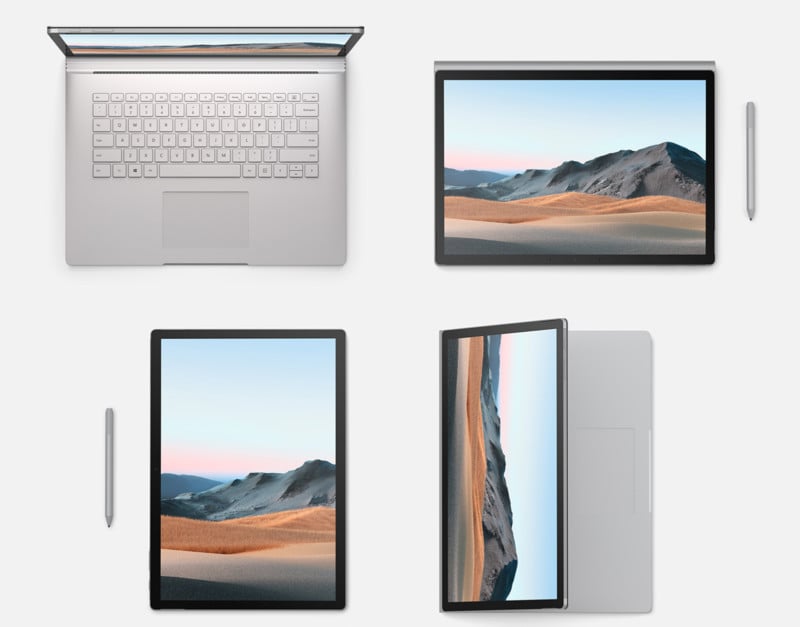 In terms of ports, we get a mixed bag. On the one hand, the computer comes with a full-sized SDXC card reader. On the other, your only other connections besides two of Microsoft’s proprietary Surface Connect ports are 2 USB-A (3.1 Gen 2) and 1 USB-C (3.1 Gen 2 with power deliver), which means no Thunderbolt 3.

Having a single USB-C port on a modern laptop feels like a major miss for Microsoft, and the fact that this port isn’t even Thunderbolt 3 is baffling.

Finally, design-wise not much has changed. If you liked the previous iteration and don’t mind the “gap” when the laptop is closed, you’ll like the Surface Book 3; if you did mind, and couldn’t stand that gap, no attempt has been made to remove it. 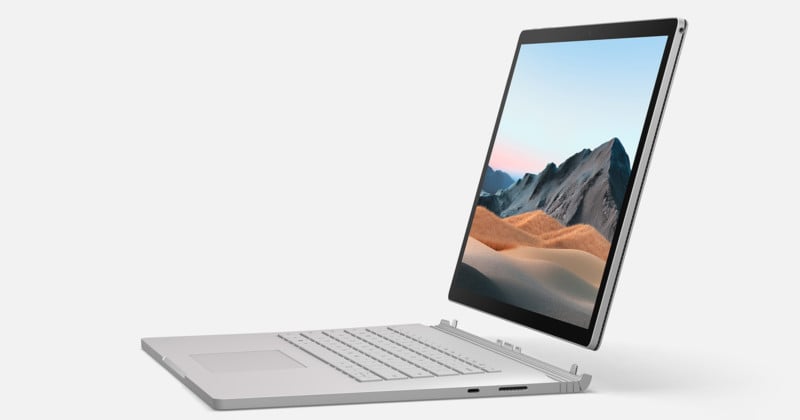 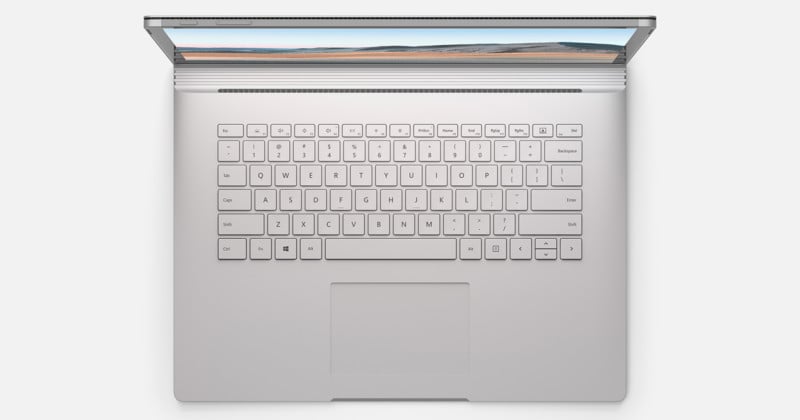 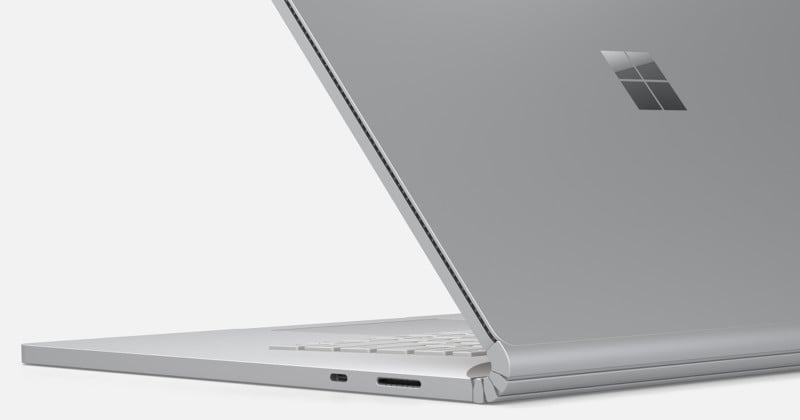 The Surface Book 3 is available to order starting today, with the 13-inch and 15-inch base models starting at an Apple-esque $1,500 and $2,300, respectively. Neither base model is the way to go though. For creative work, you’ll probably want to step up to at least the $2,000 13-inch model, which comes with 16GB of RAM and discrete graphics.

To find out more about the Surface Book 3 or configure your own, head over to the Microsoft website.

There is No ‘Formula’ for Good Photo Composition