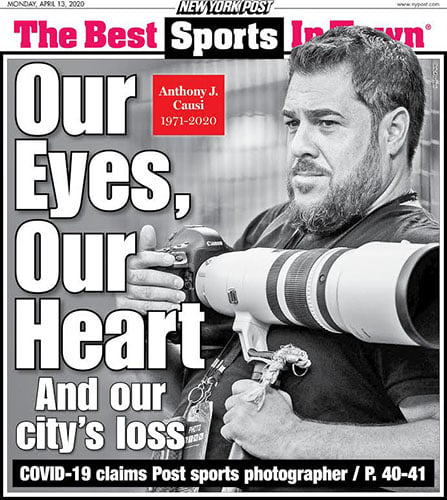 Well-known sports photographer Anthony Causi died Sunday from the coronavirus at the age of 48. Causi captured photos of New York City sports teams for the New York Post in a career that spanned over 25 years.

The Post reported Causi’s death yesterday and honored him today with a back cover today that reads: “Our Eyes, Our Heart. And Our City’s Loss.”

Causi had been hospitalized at North Shore University Hospital on Long Island at the time of his passing. Three weeks ago, on March 22nd, Causi posted a selfie to his Instagram that showed him receiving oxygen at a hospital.

I never thought I would get something like this.i thought I was indestructible. If I do make it out of here. I promise you this the worlds not going to know what hit it

“I never thought I would get something like this,” the photographer wrote. “I thought I was indestructible. If I do make it out of here. I promise you this the worlds not going to know what hit it.”

Born and raised in Brooklyn, Causi graduated from Pace University before joining the New York Post in 1994 as a photo messenger. Climbing the ranks, he became a photo editor and then finally a full-time photographer that documented top-tier NYC teams across a wide range of sports, including the Yankees, Mets, Giants, Jets, Knicks, Rangers, and more.

One of his most celebrated photos shows Yankees legend Mariano Rivera from behind as he exits the bullpen and trots into a sold-out Yankee Stadium:

RIP to Anthony Causi who was 48 years old. He died from the Coronavirus. Tony a longtime photographer for the NY Post who took this famous photo on a piece of memorabilia in my house from Rivera’s last game that @richeisen gave to me. I met Tony a few times at events, great guy. pic.twitter.com/6uqGSYLFmj

“Anthony Causi was our colleague, our friend, and a brilliant journalist,” says Post editor-in-chief Stephen Lynch. “He was, quite simply, one of the best sports photographers in New York City, capturing all the major moments of the past 25 years. Soft-spoken, funny, but most of all kind — he was respected by those he photographed and admired by those with whom he worked.

“The Post that you read, and the newsroom that we work in, are less colorful today because of his absence. Our hearts go out to his family, and we share their grief.”

Tributes to Causi have been posted to social media by prominent photographers, athletes, and journalists:

My wife and I are heartbroken, @ACausi was a bigger hit at my son’s 3rd birthday party than Marshall from @pawpatrol He was a giant and we are all going to miss him. A titan in the professional sports world, to think he’d offer to shoot a little boys bday still overwhelms me. pic.twitter.com/OQCqpypeMA

The thing about @ACausi was, he did this every day, at every game, for people he knew and people he’d never met. There are, quite literally, thousands of his photographs preserved in frames and scrapbooks of people he met for only one fortuitous moment. https://t.co/sRwNFiJKbs

RIP Anthony Causi. 48 and taken by the virus. My prayers and condolences to his family. God speed.

The back page of tomorrow’s @nypostsports is for own of their own:
Their endlessly talented, universally loved photographer Anthony Causi, who has died of coronavirus at 48https://t.co/JtJjxZbJ3d pic.twitter.com/ODHd57iO7h

“There is one thing a photo must contain, the humanity of the moment”. @ACausi was truly one of the best. RIP pic.twitter.com/jGGfayikyJ

Just some of the iconic photographs @ACausi captured during his roughly 26 years at @nypostsports. A New York sports media legend gone too soon. https://t.co/8EJqnCpvSW pic.twitter.com/ww3HKMsMdQ

To be around Anthony Causi was to be around someone who loved what he did — and you couldn’t help but be inspired by it.https://t.co/BGxXEDogfB pic.twitter.com/nRXHDtlFPm

Sad to learn of the passing of @ACausi … New York baseball won’t be the same without him in the photo pit. Praying for his family during this difficult time. @Yankees @Mets https://t.co/BQ3sUoQEaJ

Photo credit: ⁦@ACausi⁩. He took 30 minutes out of his work day to do a pro shoot for me, at a Yankees-Mets game no less. And he wouldn’t let me pay him for his work. That’s my friend—everybody’s friend, really—Anthony Causi. RIP and 🙏 for his wife and children. pic.twitter.com/dmDzABzY2E

Some players would balk if a photographer asked for an extra 5 minutes. None of the guys ever gave Anthony Causi a hard time. He always had an extra print. Anthony loved coming to the field and I enjoyed working with him. He took this photo in 2014. https://t.co/8aW2BO0BbJ pic.twitter.com/rC1x2S6O7i

The @nypostsports’ cover is heartbreaking. And their story is a touching tribute that we wish didn’t have to be written. Our condolences go out to his family and friends. Anthony was the kind of photographer we should all aspire to be — one with a heart. https://t.co/RZsH7mPAoN pic.twitter.com/zeOrhpMQE2

“He was, quite simply, one of the best sports photographers in NYC, capturing all the major moments of the past 25 years. Soft-spoken, funny, but most of all kind — he was respected by those he photographed and admired by those with whom he worked." https://t.co/lPgKdpEpre

Causi is survived by his wife, two children (ages 2 and 5), two sisters, and parents. A GoFundMe has been set up with the goal of raising $150,000 to support his family during this difficult time.

Tweak Your Curves for Another Way to Save Your Highlights