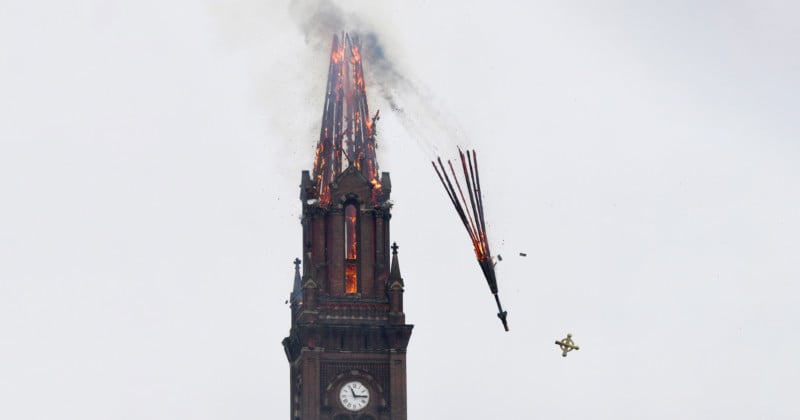 This past weekend, photojournalist Barbara Haddock Taylor captured an extraordinary image of a flaming church steeple in Baltimore crashing to the ground. We caught up with Taylor to find out more about how she captured such an arresting moment in time.

The photo was shot on the morning of March 28th, when a lightning strike set the Urban Bible Fellowship Church ablaze. Speaking with PetaPixel, Taylor says that her 8am shift with the Baltimore Sun started like any other… but that all changed when Visuals Director Leeann Adams told her that a church fire had broken out in East Baltimore.

“By the time I got there, flames were visible on the steeple and dozens of firefighters were working on extinguishing the blaze,” recalls Taylor. “I grabbed my Nikon D850 with the 28-300mm lens and jumped out of my car. Suddenly there was a loud crack, and luckily I had the camera pointed in the right direction and took several pictures.”

She captured a sequence of four shots, ultimately choosing to submit this frame because of the position of the falling pieces:

Fortunately nobody was hurt in the 4-alarm fire, but even in the midst of a pandemic, the striking image quickly made the rounds online—some judging it as darkly symbolic, others sharing it simply because it’s such an unlikely photo of such a fleeting moment. Whatever your take, we wouldn’t be surprised to see this shot pop up in next year’s crop of World Press Photo finalists.

As with most great photography, and especially photojournalism, Taylor chalks up this kind of frame to equal parts luck, preparation, and experience.

“When I was a photojournalism student in 1983, my professors at Ohio University had a catch phrase: ‘F8 and be there,’ referring to the aperture settings on a camera,” says Taylor. “Translation: always have your camera ready, and find yourself in the right place at the right time. As with most things, it’s easier said than done.”

What’s in a Photograph? Time Machines and Legacies