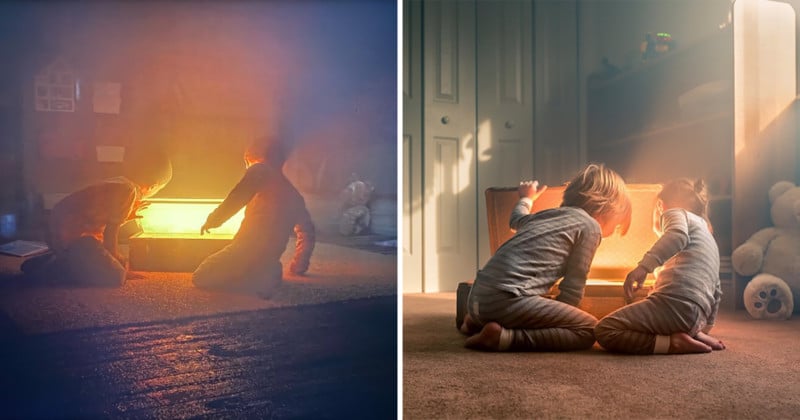 Last night, once the kids were safely nestled in bed and only the wife and I remained awake, I reached for my iPhone, opened up the Remote app to fire up my Apple TV, launched Apple TV+, and hit play on one of the tech giant’s newest shows: Amazing Stories.

About 45 seconds later, I noticed something rather … familiar … in the visuals: my own photo recreated into a short burst of cinema. It wasn’t until I investigated further that I realized how much of my image I believe they used to derive this portion of the opening credits—the part of the show that is seen by just about every one of their viewers.

First, let’s give you a glance of the opening credits. This is the best I could find on YouTube… a video comparing the original opening credits with the version from the reboot. This was something I was curious about anyways, just to be certain that the original didn’t have something similar.

The section of the video that I’m referring to can be found at the 0:45 mark:

When I took a photo of the intro with my phone this is what I captured: two children parked in front of a seemingly-magical trunk emanating a warm glow and surrounded by cool tones. When you first compare the two images the dead-on similarity is not immediately obvious.

Here’s a screenshot of my image alongside the photo I took of the opening credits:

I’ll concede that, no, at first glance, it’s not an “exact” copy. Which is why I made a video to help illustrate that it’s a much closer replication than you might think.

In the video I work with a screen shot of my image I posted to instagram over two years ago. I take that screen shot and do a very quick adjustment to get the tones and colors to match a little better, then I align the main subjects and fade between the two image…

It’s illegal to make derivative works without the original copyright owner’s permission. Before you say, “well, the room is different, the bear is different, and the floor is different…” It would actually cost them more time and resources to try and replicate it exactly—and it would also increase risk of being caught.

Instead of creating something of their own, they derived this part of their work from mine to cut corners. They did this without my permission. Without credit. Without licensing my copyright. Which I was granted at the moment of creation – in 2018.

To me, this is flagrant copyright infringement and is using my intellectual property to derive visual elements for one of the most viewed portions of their entire series… the intro that plays before every episode. I’m flattered by the obvious imitation, but I’m also disappointed by the obvious theft. I know Apple has a decent budget… meaning they should either pay people (like me) to direct your shows, or pay the original creators for their contributions.

Author’s Note: I am continually investigating this for now and these are my opinions as I do not have cold hard facts. Based off of what I’ve shared with you here, my opinion is that the team who created the opening credits derived that element of the sequence from my image.

About the author: Adrian Murray is a well-known photographer, artist, Lightroom expert, and author. This opinions in this post are solely those of the author. To see more of Adrian’s work, visit his website or give him a follow on Instagram. This review was also published here.