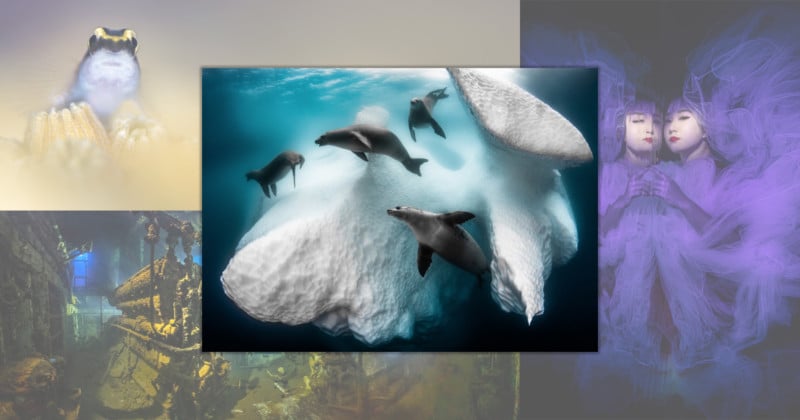 The Underwater Photographer of the Year competition has named its winners for 2020, crowning French photographer Greg Lacoeur as this year’s champion and selecting 8 other category winners from among 5500 entries submitted by underwater photographers from 70 different countries.

The UK-based competition named its first Underwater Photographer of the Year in 1965, but the contest has grown significantly in popularity in recent years. Last year’s winners were spectacular, and a lot to live up to from the 2020 crowd. Scroll down to see how they measure up.

Underwater Photographer of the Year 2020

This year’s grand prize and title of Underwater Photographer of the Year 2020 went to the winner of the Wide Angle category Greg Lecoeur for his photo Frozen Mobile Home:

Location: Antarctic Peninsula
Camera: Nikon D500
Caption: Massive and mysterious habitats, icebergs are dynamic kingdoms that support marine life. As they swing and rotate slowly through polar currents, icebergs fertilize the oceans by carrying nutrients from land that spark blooms of phytoplankton, fundamental to the carbon cycle. During an expedition in Antarctica Peninsula with filmmaker Florian Fisher and freediver Guillaume Nery, we explored and documented the hidden face of this iceberg where crab-eater seals have taken up residence on icebergs that drift at the whim of polar currents.

First prize in the Macro category went to photographer Hannes Klostermann for his image Goby Goodness:

Location: Little Cayman, Cayman Islands
Camera: Nikon D500
Caption: During the dive that I took this image on I swam a grand total of about 30 metres. I dropped down from the surface and descended towards the shallow, pristine coral reef in the Cayman Islands when I spotted this little fella posing right at the top of a coral head. I noticed the purple sea fan in the background and suspected it would look pleasing with a shallow depth of field, a look I really like in macro photography. After I had taken the first image and reviewed it I knew I would spend the entire dive with this goby, as the complementary colours of the fan and coral head worked very well together. Thankfully, the goby really seemed to enjoy the prime spot at the top of the coral head so it kept coming back to have its picture taken, not minding my close approach one bit.

First prize in the Wrecks category went to photographer Tobias Friedrich for his image The Engine:

Location: Chrisoula K., Abu Nuhas
Camera: Canon 1DX Mark II
Caption: Panoramic image of the engine room of the Chrisoula K. with six video lights placed behind the engines. I went there on several trips with a liveaboard, being able to check out the possibilities of creating some different lighting in the wrecks. But usually the boats do only 1-2 dives per wreck, so I had to be quick in decisions. The space between the engine inside the wreck is very narrow and the angle for a single photo was just not enough, so I thought it was the best idea to create a panoramic image to display the machine room in one shot. Placing the lights took some time as well to find the right mix of ambiance and light from the outside. Because the wreck is dived a lot in the Red Sea I had to wait for a good slot when nobody was inside it.

First prize in the Behaviour category went to photographer Pasquale Vassallo for his image Octopus Training:

Location: Tyrrhenian Sea, Bacoli, Naples
Camera: Canon 5DS R
Caption: At the end of a session of free diving, I noticed a soccer ball, in the distance and on the surface. Intrigued I approached it, and then I noticed that below it was an octopus that was being pulled along by the current. I do not know what it was doing under the ball, but I think it is training for the next football World Cup! There was time for me to take a couple of shots before the octopus let go of the ball and dropped back to the seabed.

First prize in the Portrait category went to photographer Lilian Koh for her image Butterfly Effect:

Location: Tulamben, Bali, Indonesia
Camera: Canon 5D Mark IV
Caption: Having been immersed mostly in creative macro, this is the first time I have used a snoot technique on a larger scale. Maintaining a shallow depth to capture the reflection, the snoot is used to bring focus to the model while the blue light catches the flowing veil that frames around her creating a butterfly effect.

Location: Komodo National Park, Indonesia
Camera: Canon 5D mark III
Caption: The creation of this image was inspired by in-camera double exposure photography.
This abstract style typically involves re-exposing the silhouette of a person against a textured background such as urban landscape. I was mesmerized by the aesthetics as well as the extensive possibilities of interpreting this form of visual art. At the same time, I also found no examples of the style applied underwater.

Fueled with inspiration, I spent a year researching and experimenting to marry this technique with underwater photography. This black and white image was made by first shooting a silhouette against a cloudy afternoon sky. The picture was then re-exposed against the image of a coral garden. While this image pays homage to subjects most dear to me, I hope that viewers could find their own meaning as they juxtapose the elements and contrasting textures in the picture.

First prize in the Compact category went to photographer Manbd for his image Uluna Lily:

Location: Uluna Lake, Manado
Camera: Olympus TG-4
Caption: Uluna Lake in North Sulawesi located 670m above sea level is a place I’ve always wanted to visit. When I got the opportunity to dive in this freshwater lake at the end of last year, I knew what I wanted to shoot. As I stayed at YOS Dive Lembeh Eco Resort, the journey to the lake took less than two hours. This crystal clear springs lake is famous for its water lilies which only bloom in the morning and blue sky gave a good contrast when shooting. Geared with a mini dome, I did my level best to shoot a split shot and staying very still to find the right angle and moment.

Up & Coming Underwater Photographer of the Year 2020

The title of Up & Coming Underwater Photographer of the Year went to Anita Kainrath, who received the accolade for her image Shark Nursery:

Location: Eleuthera, Bahamas
Camera: Nikon D300s
Caption: The Bahamas has been a shark sanctuary since 2011 but Mangroves aren’t protected yet and that’s where these lemon shark pups spend the first 5-8 years of their lives.

I was standing in knee-high water, trying to hold my camera still, waiting for the sharks. Trying not to move when you have mosquitoes and sand-flies buzzing around you was probably the part I struggled with the most at this moment. After less than one hour the little predators came closer and finally swam around my feet and my camera, bumping against me and trying to taste my strobes. They are curious little fellas but you need time to gain their trust and I love observing them in their natural habitat and that’s what I wanted to capture.

They are such characters and we need to protect their nurseries in order to make sure their population is not declining.

Marine Conservation Photographer of the Year 2020

Finally, last but certainly not least, the title of Marine Conservation Photographer of the Year went to Pasquale Vassallo for his photograph Last Dawn, Last Gasp:

Location: Tyrrhenian Sea, Bacoli, Naples
Camera: Canon 5DS R
Caption: This winter, I went diving with some local fishermen. At 6 in the morning I was already in the water, as the nets were raised at first light. During the dive I followed the path of the fishing nets from the bottom to the surface. As the fishermen quickly hauled on the nets, I tried to take some shots of trapped fish still suffering in the mesh, such as this tuna (Euthynnus alletteratus).

To see more of the photographs honored by this year’s Underwater Photographer of the Year competition or learn more about the contest, head over to the UPY website where you’ll find all the runners up and honorable mentions as well.

You can find the full winners gallery at this link.

Fujifilm is Going to Release an X-H2, But Probably Not This Year: Report