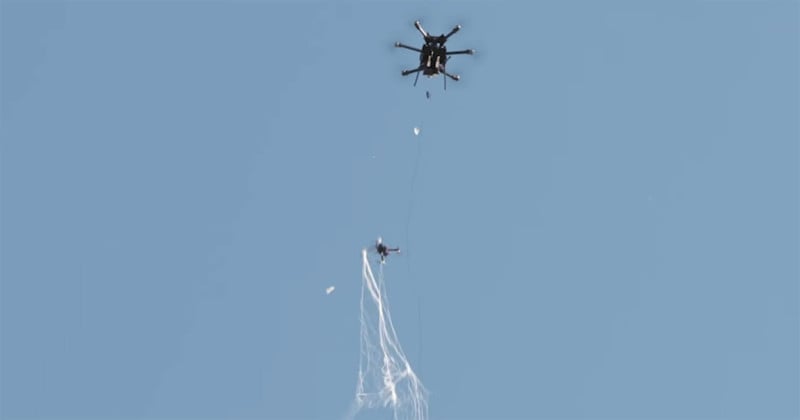 The US Department of Defense is reportedly spending millions on a special “Drone Hunter” system that uses an AI-enabled interceptor drone to catch other, illegal drones by chasing them down and shooting them with a large net… Spider-Man style.

The ‘Drone Hunter platform’ was developed by Fortem Technologies, and it’s not unlike this drone catcher research we reported on in 2016. Rather than jamming the drone’s signal, literally ramming it out of the sky, or using a trained eagle to take it down (seriously…), the system uses an AI-enabled “interceptor drone” to chase down and catch smaller drones in a large net.

You can see the system in action in the video demonstration below:

The system works by pairing the AI-enabled DroneHunter with a ground-based radar system called TrueView. Once a threat has been detected, the fully-autonomous “interceptor drone” launches, tracking down the drone using onboard radar, snaring it in a net, and carting it back to a designated area.

The advantages of this system over, say, shooting the drone out of the sky are obvious. Catching the drone eliminates any danger to bystanders on the ground, and allows authorities to inspect the offending drone and potentially identify the pilot responsible. So while the Pentagon does have permission to shoot drones out of the sky, in many cases, it would probably prefer to avoid this option.

Whatever the thought process, one thing is clear: as consumer drones become more prevalent and wide-spread, the methods for tracking, taking down, or catching drones that violate FAA rules (or worse) are only going to get more sophisticated.

(via Defense One Engadget)