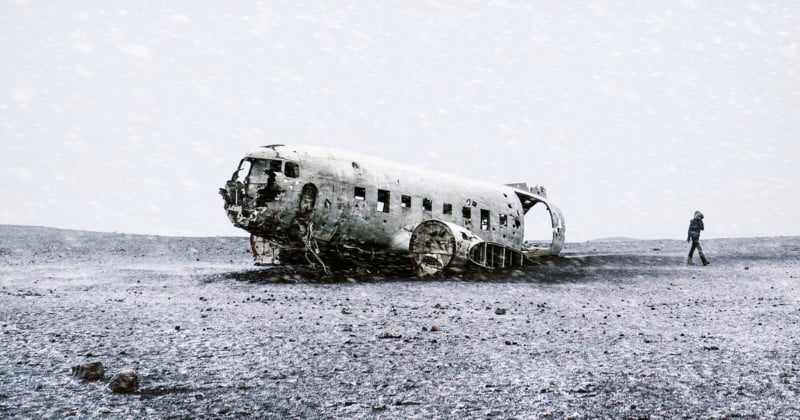 A young Chinese couple in their early 20s was found dead last week near the famous DC-3 plane crash site in Iceland: an iconic photo spot frequented by photographers and tourists alike. Authorities say there was no sign of foul play, and believe inclement weather is to blame.

According to the BBC, authorities were alerted to the incident last Thursday after tourists discovered the woman’s body off the path leading to the site. The man’s body was found a couple of hours later, a short distance away. Local authorities believe the couple died of hypothermia after getting caught in a “torrential downpour” near the wreckage on Monday.

The crash site is immediately familiar to most photographers. The US military DC-3 crashed on the beach at Sólheimasandur in 1973, where its fuselage lies to this day attracting all manner of photographers and tourists who pose with and climb the wreck for pictures. The plane even made an appearance in the controversial music video for Justin Bieber’s song “I’ll Show You,” in which he skateboarded on the DC-3.

The site has experienced a huge surge in popularity since the music video aired 5 years ago; however, many tourists are not properly prepared for the 4km hike to the crash from the nearest parking lot, a walk that can take up to two hours on a path that is easily lost in a storm. There is a bus available to take visitors to and from the site, but it’s expensive, and many tourists opt to save money and walk instead.

This is likely what happened to the couple, whose rental car was found in the site’s parking lot.

According to Jóhannes Thór Skúlason, the head of the Icelandic Tourism Association, the organization does its best to warn tourists about inclement weather and incoming storms, but not everybody hears or heeds these warnings.

“It’s unbelievable when such events happen,” Skúlason told Icelandic publication Ruv. “We have been lucky in the explosion of the tourism industry in recent years, although there are a few events of this kind that we have had to deal with.”

This Photo Seems to Show the World’s Tallest Trolley