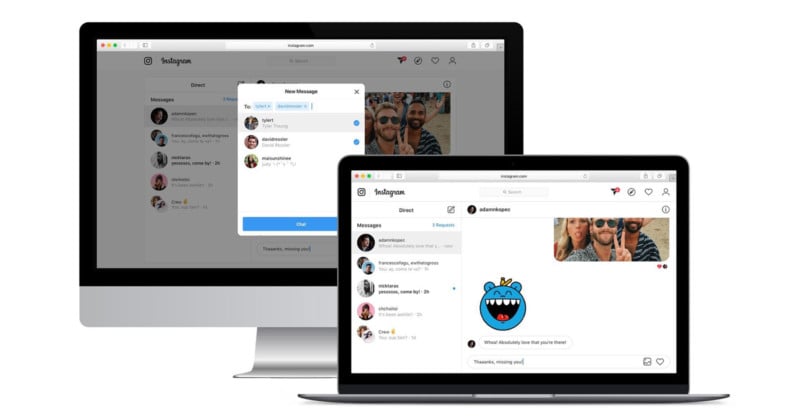 Instagram is testing Direct Messaging on the Web: a feature that could come in very handy for professional photographers who use Instagram as a business and branding tool.

While DMs on the Web might not affect most “typical” users of the platform, photographers who communicate with clients or use IG to find models and collaborators will no-doubt welcome the addition. It would make it much more convenient to do business over the platform, in addition to letting you communicate with friends and followers without taking out your phone.

The “test” was announced over Twitter, so it’s not a certainty that this will become a full-blown feature, but the response so far has been quite positive:

DMs, but make them desktop. 👍

We’re currently testing Direct messaging on the web, so you can read and reply to your messages from wherever you are. pic.twitter.com/VJ06EpETxG

“We’re currently testing Direct messaging on the web,” reads the tweet, “so you can read and reply to your messages from wherever you are.”

The announcement makes no mention of how many users are seeing this feature or when it might officially launch, but it’s good to see that IG is willing to expand the usefulness of its Web client for those of us who don’t want to be tethered to our phones.

Of course, unless and until Instagram allows you to post images from the Web client, the experience will be critically incomplete, but this is definitely a step in the right direction.