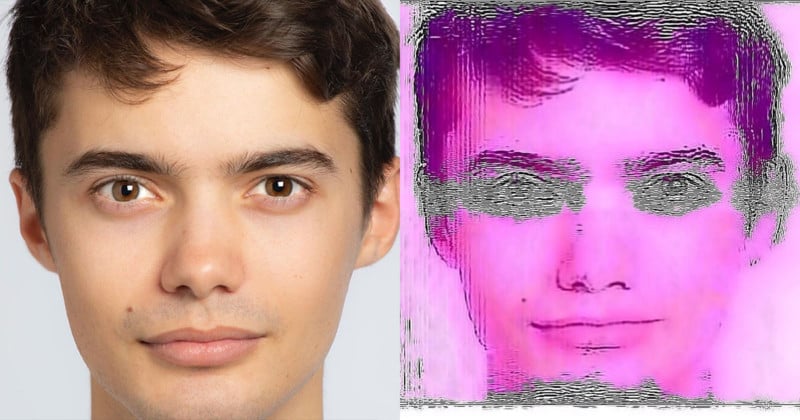 Photographer Janick Entremont took a portrait of himself, uploaded it to Instagram, downloaded it, and repeated that process over 300 times to see what the photo-sharing service’s compression algorithms would do to the image. The resulting project is titled “@facetinction | A (con)temporary portrait.”


“Quality loss and alienation of the picture are consequences of an algorithmic compression,” Entremont writes. “What will last from your digital data? Not existing faces are created – instead, some that already exist are arranged to fit. Being altered and changing becomes one. Until nothing is the same anymore.”

Here’s an animated GIF showing the quality loss as the compression builds up — this is something known as “generation loss.”

“For me, the project is relevant on many levels: The handling of our digital data, online or offline, and the flood of images,” Entremont tells PetaPixel. “How improper use of social media changes our well-being and our appearance (regarding trends). Up to the constant surveillance and face recognition as it is common in China.”

Artist Pete Ashton did this same experiment on Instagram back in 2015 with his project “I Am Sitting In Stagram (2015),” but he stopped at 90 reposts. The resulting generation loss also looks quite different between Ashton’s experiment and Entremont’s — it’s unclear whether this is due to a difference in the starting photos or because Instagram has made changes to its compression algorithm.