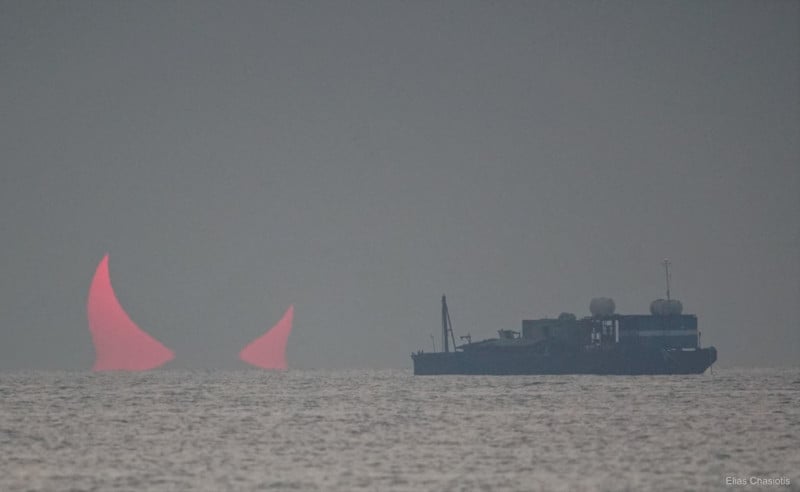 Here’s an unusual sunrise that was captured a few days ago in Qatar. A solar eclipse was underway as the Sun began rising above the horizon, making the Sun look like it was split into two pieces (and like red horns rising into the sky).

Elias Chasiotis was in the Western Asian nation on December 26th to witness the annular eclipse, which is when the Moon covers the Sun’s center and leaves the outer edges visible as a “ring of fire.”

“The annular phase was blocked by clouds, but the red crescent sunrise was the most awesome sunrise I’ve ever seen!” Chasiotis writes.

What’s neat about this photo is how the peculiar shape comes about — both the dark circle across the top of the Sun and the dark mount below it are the Moon.

“[The Earth’s atmosphere had an inversion layer of unusually warm air which acted like a gigantic lens and created a second image,” NASA’s Astronomy Picture of the Day writes. “For a normal sunrise or sunset, this rare phenomenon of atmospheric optics is known as the Etrucan vase effect.”

Create and Conserve in 2020: Extend Your Love for Landscape Photography to the Land