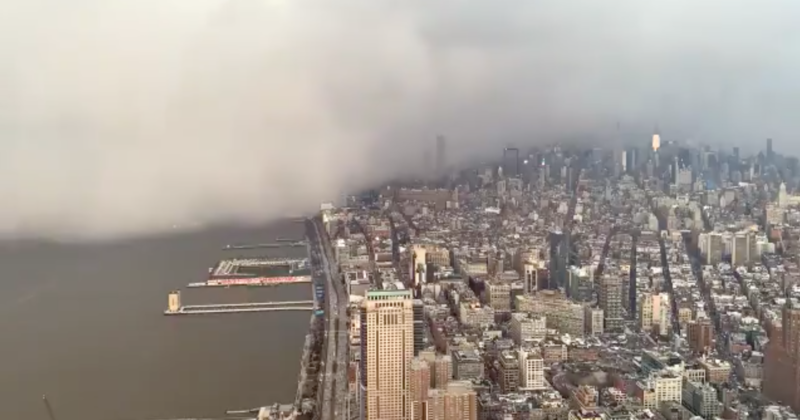 Earlier today, a “snow squall” quickly engulfed the island of Manhattan in dramatic fashion. Fortunately, there are plenty of cameras set up around NYC, ready to capture something like this when it comes along.

A snow squall, for the meteorologically uninitiated, is an “intense burst of snow” that’s typically accompanied by very strong winds. They last between 30 and 60 minutes, and while the description might not seem too menacing, the visuals certainly make up for it. New York City had its first snow squall of the season earlier today, and as this footage from the One World Observatory demonstrates, a snow squall can be a beautiful, dramatic, and terrifying thing to behold as it swallows up your city:

Wow! Check out this time lapse of the #SnowSquall moving over Manhattan. Crazy cool view from the top of One World Trade Center. pic.twitter.com/K7kxjcA0Zt

Here’s the same phenomenon captured from the 67th floor of the Empire State Building. Interesting when you realize that these two people were actually recording each other as this happened:

Woah! #SnowSquall hitting NYC. From the 67th floor of the #EmpireStateBuilding
Credit: my amazing wife! pic.twitter.com/bnBX9PCroJ

And, not to be outclassed, here’s footage from 30 Rock that captures the squall rolling in, the whiteout conditions during, and the city being revealed once more afterwards:

Even Goldman Sachs took a break from all that financial nonsense and got in on the timelapse action:

Well that was fast! Time-lapse of today’s #SnowSquall as seen from our NYC headquarters. pic.twitter.com/qI3RDWpuag

You can see more photos and footage from Mother Nature’s little display of power in Manhattan today by looking up the #snowsquall hashtag on Twitter. If you’re in Manhattan, we hope for your sake that you were indoors; but even more importantly, we hope you had your camera charged and ready to shoot. Looks like #snowsquall 2019 was a pretty incredible photo opportunity.