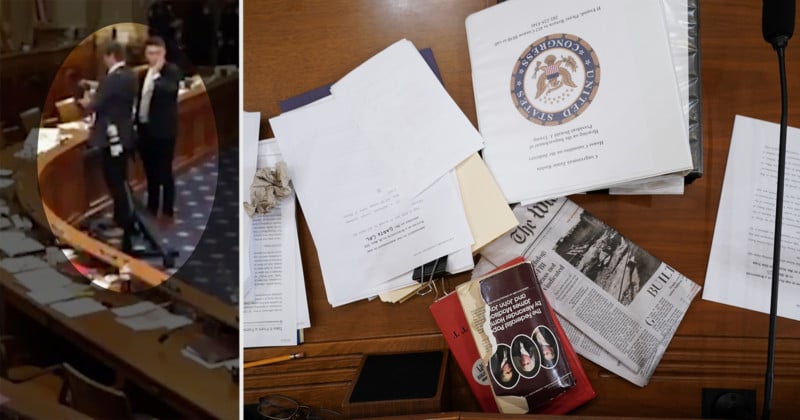 Reuters photojournalist Joshua Roberts was escorted out of yesterday’s Impeachment Hearings after a Republican member of the House Judiciary Committee noticed him taking photos of the papers on one of the Democratic members’ desks at the dais. Reuters maintains that Roberts was doing nothing wrong.

The incident took place during a break in the proceedings, while the members of the committee were marking up the articles of impeachment against President Donald Trump. During this break, Roberts struck up a conversation with a colleague at the dais, where he also took the opportunity to capture three photographs of the documents on the desk of House Judiciary Committee member Representative Jamie Raskin (D-MD).

The photos, which have been published by Reuters, show The Federalist Papers, a copy of the Washington Post, and other documents on the Representative’s desk:

CNN caught the incident on camera during its live feed of the hearings, which you can see in the video below, immediately sparking online outrage from people who believed the media was taking pictures of Republican members’ notes from the hearing.

However, as representative Matt Gaetz (R-FL) announced once the hearing got going again, Roberts was photographing the desk of a Democrat, and was removed at the request of the Republican members of the committee.

“During the break, a Reuters photographer, Josh Roberts, walked over to the dais and took pictures of the notes of the desks of several of my Democratic colleagues,” said Gaetz. “We noticed that, announced it to staff, and that reporter, that photographer, has been removed. And I would just say, no member, Republican or Democrat, should be subject to that—we ought to have the opportunity to take our notes, participate in debate, and have a fair discussion.”

For their part, Reuters denied that Mr. Roberts did anything wrong. In a statement published by The Hill, a Reuters spokesperson said that Roberts did nothing wrong.

“His photos include members’ copies of the U.S. Constitution, the Holy Bible, The Federalist Papers and pieces of illegible paper that were sitting on the dais,” reads the statement. “He broke no rules and left the hearing voluntarily.”

You can see all of Roberts photos from yesterday’s hearings on the Reuters wire service website.

Interestingly, this incident comes less than a month after Getty photographer Mark Wilson used a telephoto lens to capture a close-up of President Trump’s notes ahead of a quick press conference. Those photos, which were undoubtedly obtained by legal means, went viral after Getty tweeted them out.

Image Credits: Photograph by Reuters/Joshua Roberts, licensed for editorial use.