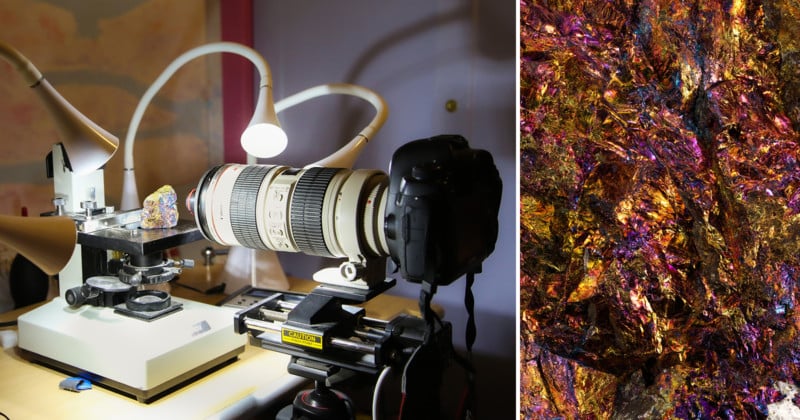 Extreme macro photographer Chris Perani specializes in capturing the natural world in extreme detail. His latest series “Minerals” gives us a peek at the intricate structure of minerals, fossils, shells, and gems like never before, with each photograph created by stacking over 25,000 photos together.

Extreme macro—as many our readers know—is one of the most exacting genres of photography. When capturing something that small, no matter the lens, you’ll need to focus stack many images together in order to get your subject in focus. But while most extreme macro photographers stack tens or maybe a few hundred images together, each of Perani’s images are made up of over 25,000 individual photos captured about 10 microns apart—for reference, the width of a human hair is bout 75 microns.

25,000 shots might seem like overkill, but it’s a necessity when you’re shooting with the kind of setup that Perani uses. He’s capturing each image through a 200mm Canon lens with either a 5x or 10x Nikon microscope objective attached to the end of it, as you can see in this behind these scenes photos he shared with PetaPixel: 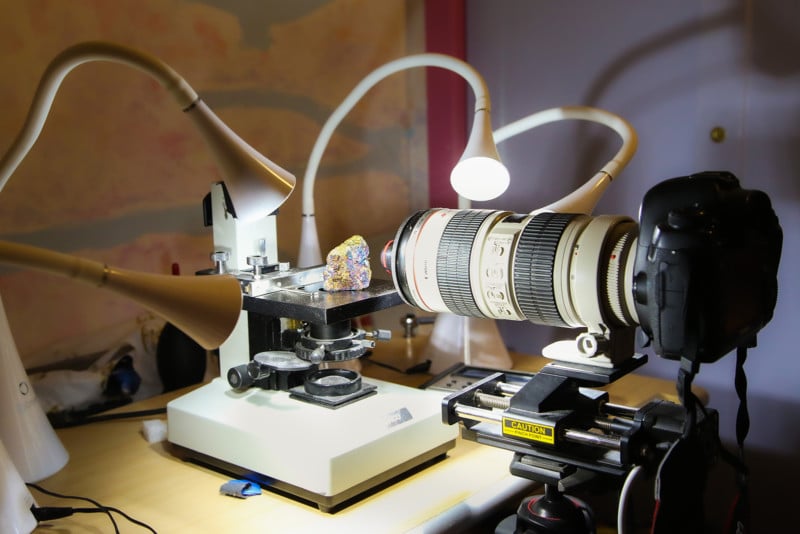 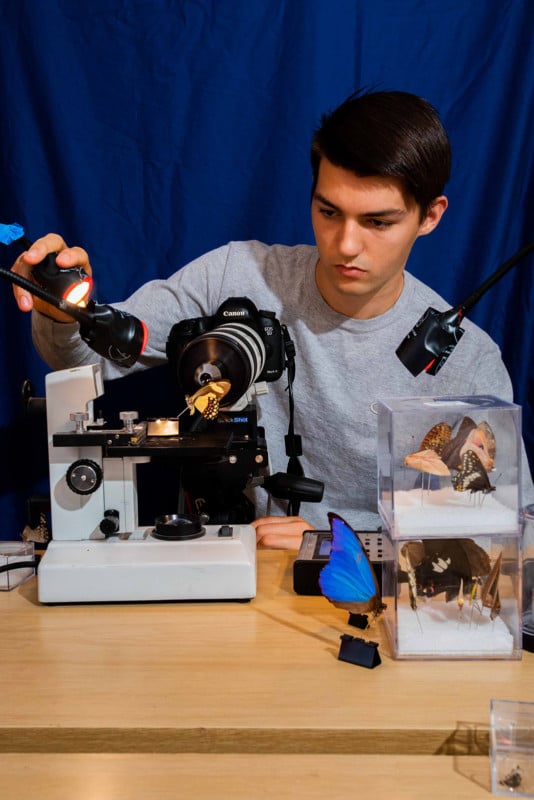 “The depth of field on an objective is almost nonexistent,” Perani tells PetaPixel. “To achieve a truly focused shot, I use a Cognisys stackshot automatic focus rail that moves the lens no more than 10 microns per photo. This yields 350 exposures, each with a sliver in focus, that is composited together into a single file.”

So, how come the final shot is made up of 25,000 photos? Because in order to get the final image he must do this again… 70 more times.

“This [350-photo] file is one piece of a seventy piece puzzle,” says Perani. “The process is repeated seventy more times for every section of the subject. The photos are then composited and pieced together to create the final image.”

When it all comes together, you get these incredible extreme macro photographs that showcase the natural flaws and purities of minerals at a level of detail you’ve never seen before: 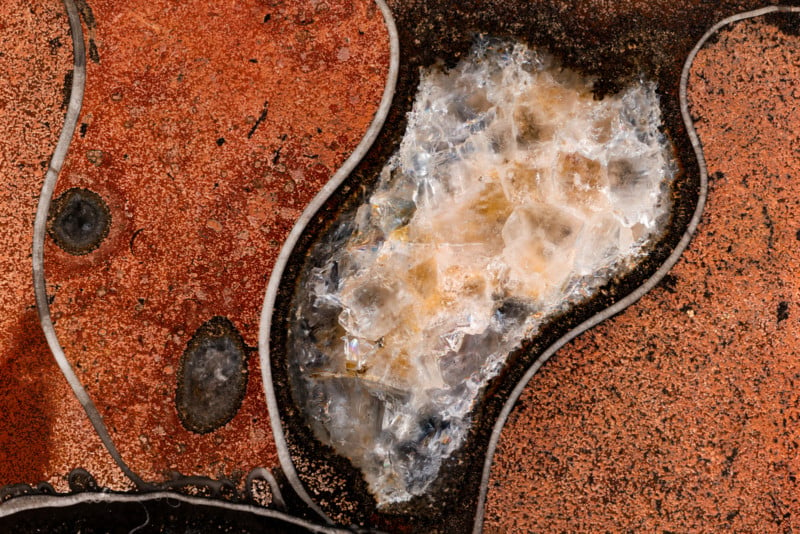 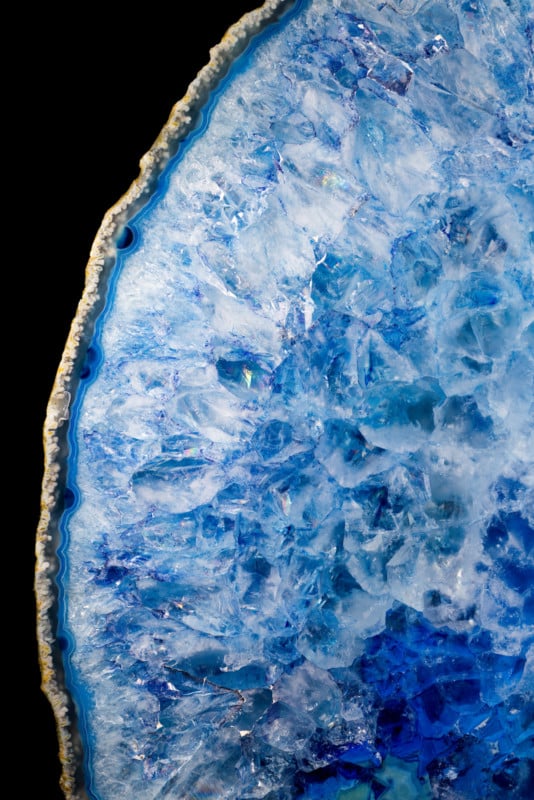 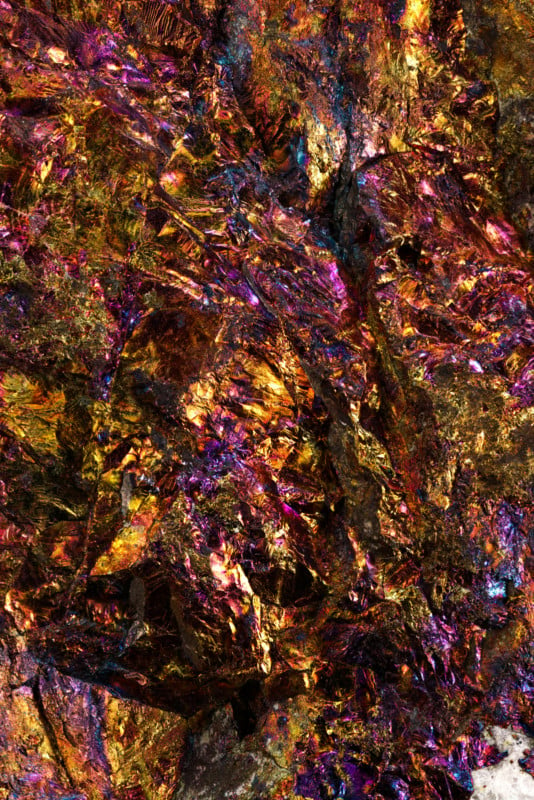 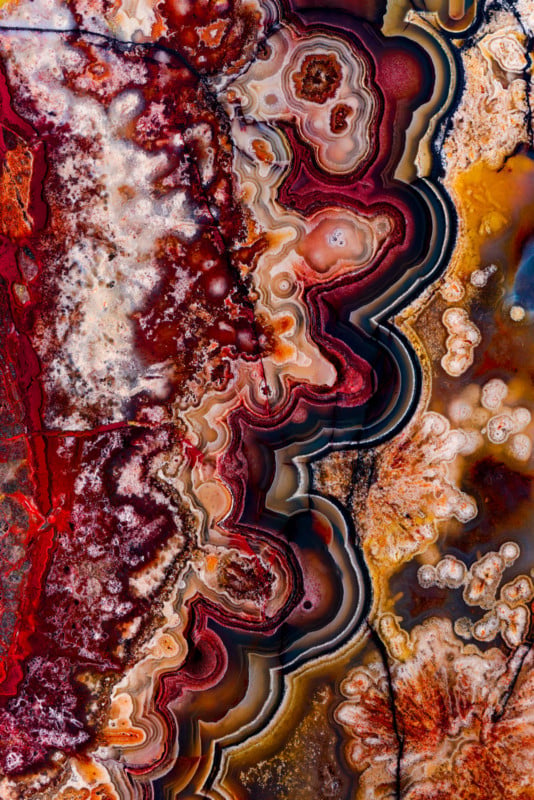 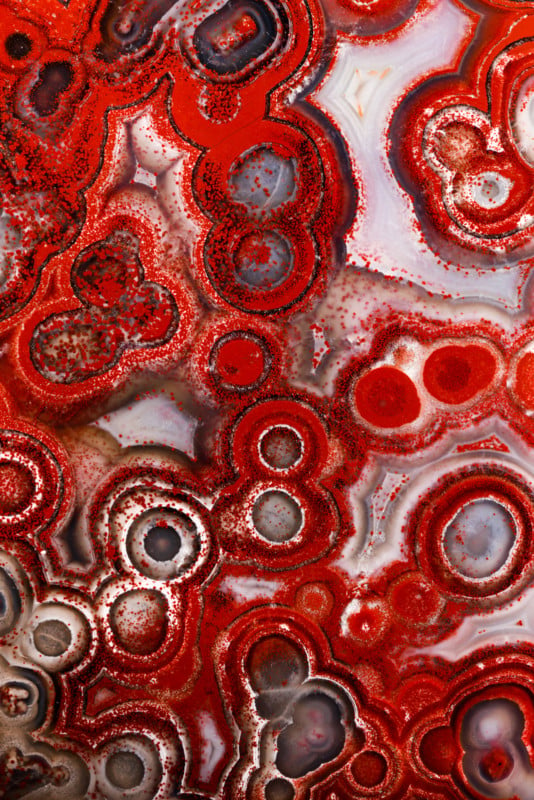 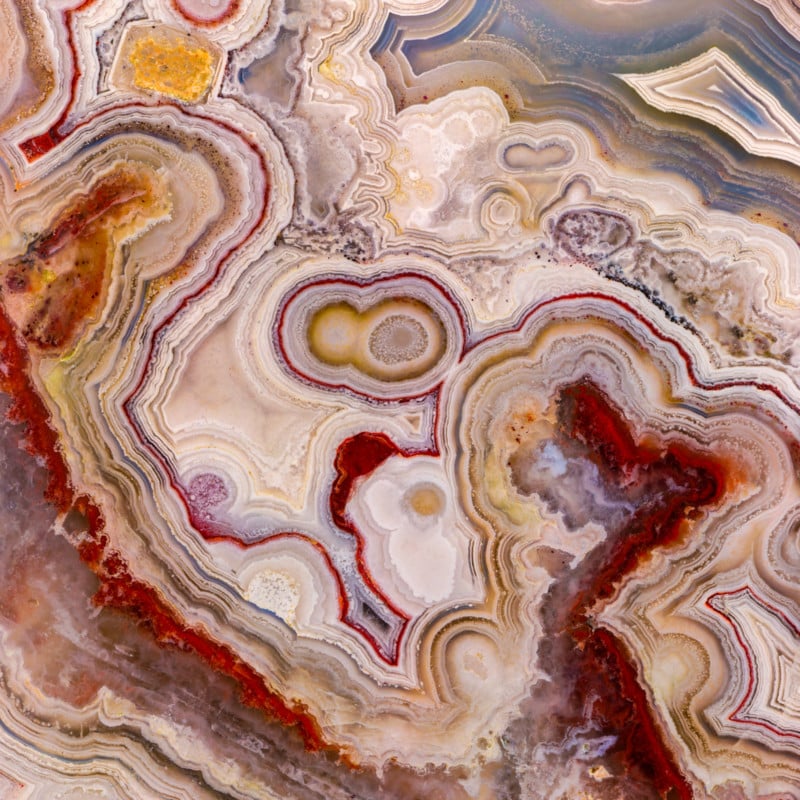 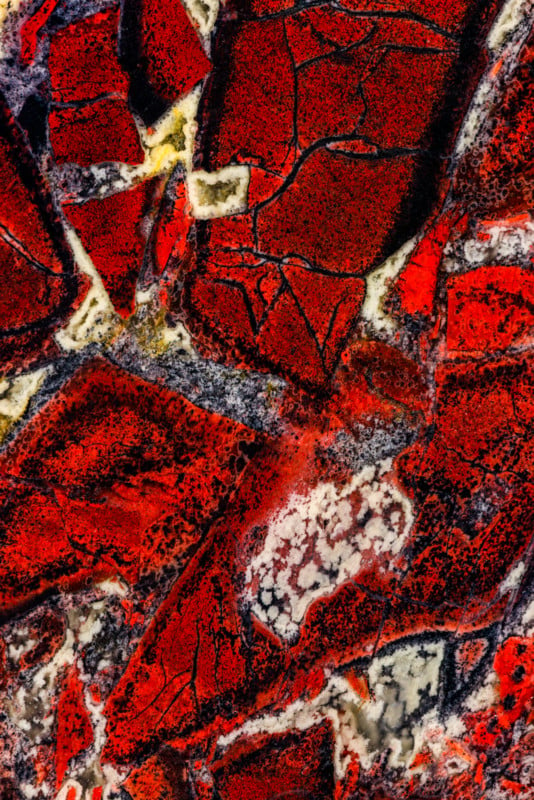 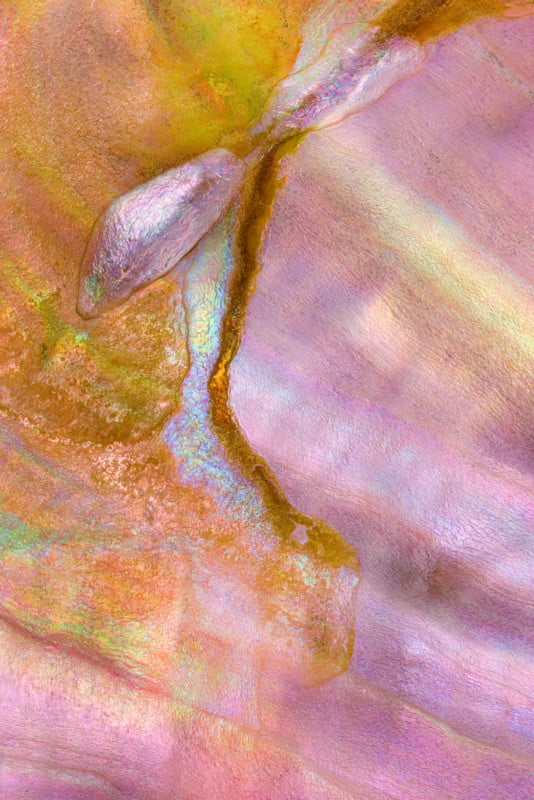 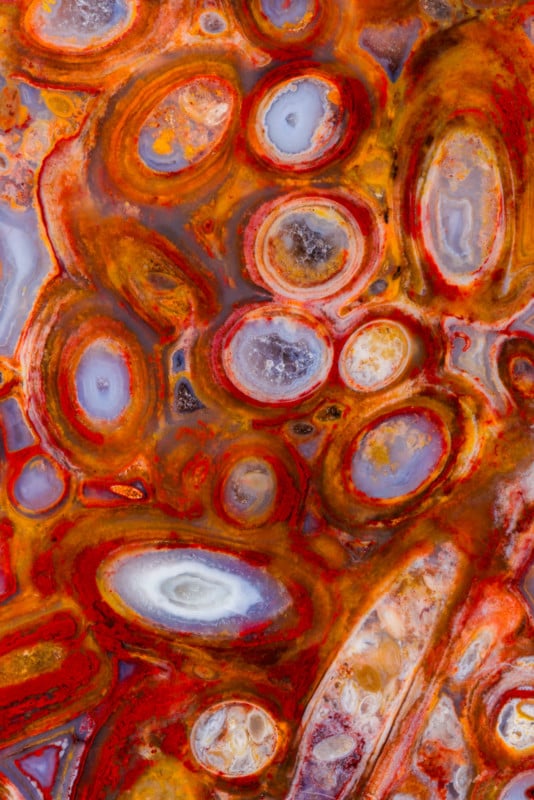 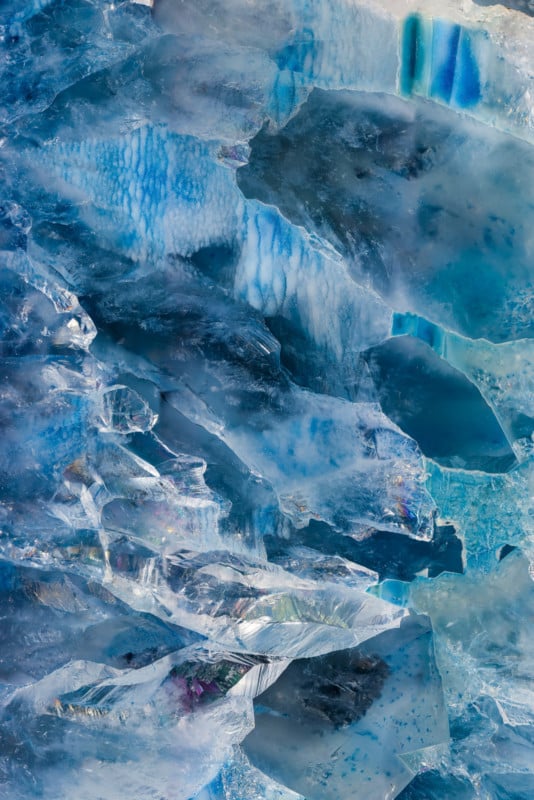 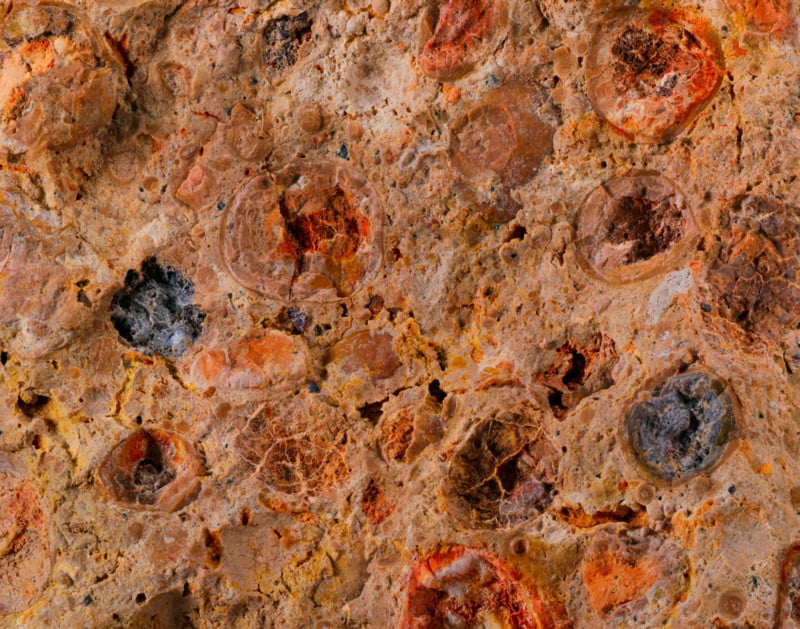 To see more of Perani’s extreme macro work, head over to his website or give him a follow on Instagram. He doesn’t just shoot Minerals—he has a stunning series on butterfly wings as well, among others—but this latest project is one of the most involved and intense he’s ever attempted. Fortunately, the results speak for themselves.

Image credits: Photos by Chris Perani and used with permission.