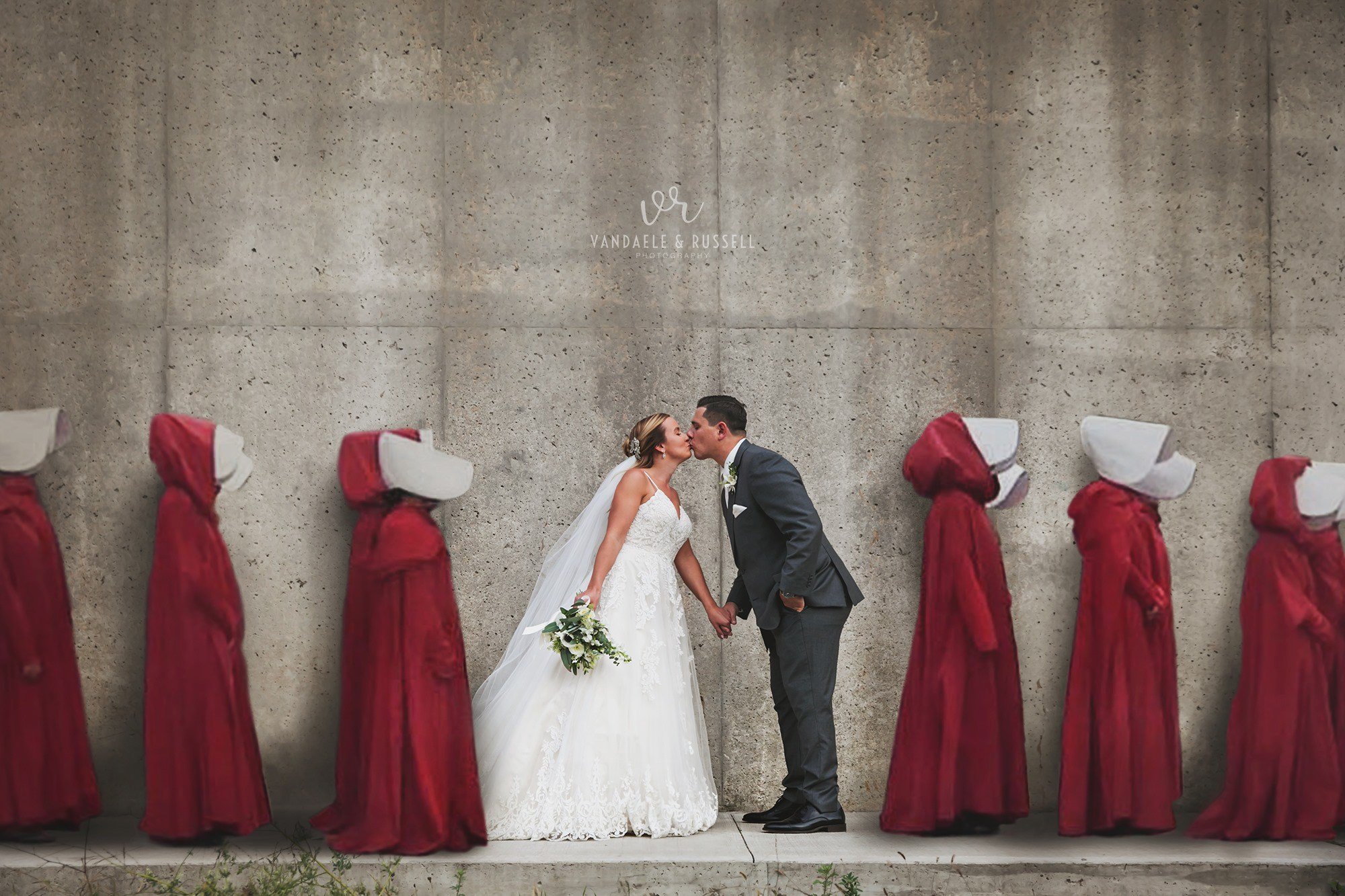 Photographer Shawn Van Daele of Van Daele & Russell Photography has became the target of online outrage this week after posting a Handmaid’s Tale-themed wedding photo captured at the ‘hanging wall’ with a newlywed couple. Angry commenters say the photo is insensitive and offensive. Van Daele’s response: ‘That’s the point.’

The Handmaid’s Tale television show—based on Margaret Atwood’s classic novel of the same name—is a dystopian drama based in fictional “Gilead.” Due to extremely low fertility rates, the few fertile women left in Gilead are enslaved and provided as Handmaids to the homes or ruling elite, where they are forced to bear children for those men and their wives.

Anybody who resists or commits a crime in this dystopian world is hanged at the so-called “hanging wall” for their crimes.

The photo was shot at Cambridge Mill—where the Hulu show sets the “hanging wall”—and is actually a composite. The couple, Kendra and Torsten, was photographed on-site, and the handmaids were added in Photoshop.

“The couple as well as ourselves are HUGE fans of the TV show (and obviously, first, the book). Anyone who would put out an image like this without understanding what it implies has bigger problems than upset people on social media,” Shawn tell PetaPixel. “I knew when creating the image that it would possibly upset people, but that’s sort of the point…to wake people up.”

“The groom wanted photos on the ‘hanging wall,’ which is where we were taking their wedding photos; I joked about adding in some handmaids (since it seemed the natural thing to do since we were there…I’m certain any ‘creative’ or photographer would have the exact same thoughts),” continues Shawn. “We didn’t expect the photo to go viral, but we are SOOO HAPPY IT HAS because hopefully it will wake people up to how they too contribute to the oppression and hatred that they’re rightfully worked up over.”

Shawn is fine, if a bit saddened, by the knee-jerk outrage sparked by this photograph.

“What’s sad is that everyone is REACTING exactly as expected—just like in Gilead—and missing the opportunity to think for themselves, to educate themselves and become ENGAGED ACTIVISTS instead of simply keyboard warriors,” he told us over email.

Unfortunately, the outrage sparked by the photograph has followed the newlyweds into their every-day lives as people lash out, going so far as to track Kendra down and contact her at her work.

“K&T are rightfully overwhelmed and distraught right now, despite previously loving the photo, since it’s from one of their favorite shows,” says Shawn. “Having the world try and ruin their wedding day and paint them out to be horrible people—there are people of every race, color, and sexual orientation in their wedding party—is a little disheartening.”

In the end, Shawn wants to remind people that this wasn’t “a ‘Handmaid’s Tale’ themed wedding,” it was their wedding day. One photo in a series of thousands from their wedding day that was intended mostly as a keepsake for them.

“Everyone loves a good witch hunt…” laments Shawn. “Apparently today we are their witch.”