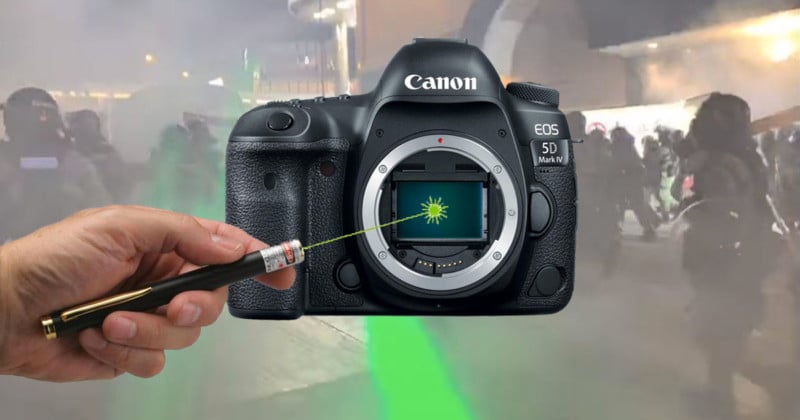 Protesters in Hong Kong are widely using handheld laser pointers in their anti-government demonstrations, and some photographers on the ground are reporting damaged sensors after their cameras were exposed to the powerful beams of light.

Beams of green and blue light can be seen at protests being aimed at law enforcement and their cameras, which can help the government identify protesters using cloud-based, AI-powered facial recognition technology.

Hong Kong police are labeling the laser pointer an “offensive weapon”, saying it could potentially damage officers’ eyes and skin.

War correspondent Michael Yon, who has documented dozens of protests so far, says police are cracking down on the lasers.

“I’ve seen a lot of lasers used in combat but never like this,” Yon tells PetaPixel. “Mostly those lasers in combat were mounted on rifles, or aircraft, or were used to guide bombs and missiles. This is a serious evolution in use of pen lasers.

“Police are arresting people they catch doing this. They tackled one woman and she tossed her laser just at my feet to ditch the evidence. That laser somehow disappeared.”

The lasers are also damaging the cameras of photographers documenting the protests on the ground for journalistic purposes. Yon says the lasers are making him cautious about shooting with his higher-end camera equipment.

“Seems my iPhone XS Max is damaged slightly, but I am unsure,” Yon tells PetaPixel. “If it is damaged, it is slightly. Am seeing what appears to be some artifacts after I took a direct shot. […] I have shot very little with my Canon due to gazillions of lasers.”

YouTuber thelastpeanut shared this 53-second video that captures how the sensor on his pricey Sony FS5 was damaged by direct hits from laser beams as it was filming a protest from behind police lines with a Canon 24-70mm f/2.8 mounted on a Speedbooster and shooting at ISO 3200.

This type of damage to the cameras of photojournalists is usually unintentional collateral damage, according to Yon.

“Generally speaking, [the protesters] do not bother anyone they see as a journalist,” the photographer says. “Hong Kongers clearly are winning the media war and are far too smart to jeopardize the massive press advantage.

“That said, there have been a few occasions when individuals definitely purposefully lased my camera when they thought I was making video of something sensitive.”

Yon says he hasn’t taken any steps to protect his camera and that he will continue shooting while accepting laser damage as a new risk that comes with the work.

“I have asked others but nobody so far has told me about special filters they are using,” Yon says. “I likely will buy a top-end Sony or Canon upgrade soon and will just take chances and probably get it fried — cost of doing business.

“I was a war correspondent for years. Cost of doing business could be death. Here we are talking sensors.”