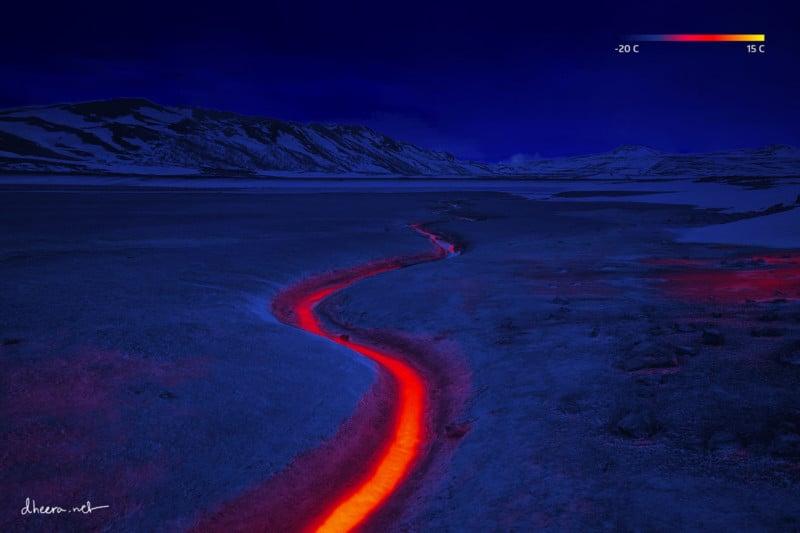 A computer vision engineer by day and photographer by night, I never take the path most traveled, especially when it comes to imaging technology. Thermal cameras are one of the most interesting types of cameras, and while they are widely used in industrial, scientific, and military applications, they are largely untouched and unknown to the general public.


Thermal cameras aren’t your average infrared camera, which sees light in the 0.8-1.7 micron range of wavelengths, depending on the sensor technology. On the other hand, thermal cameras pick up infrared light in the 7-14 micron range, which allows them to see the blackbody radiation that is constantly emitted by all objects at habitable temperatures.

These cameras require no external lighting — not even starlight — and can measure the temperature of every pixel they see from afar. That makes them excellent for spotting people or wildlife in the dark, inspecting heat loss from buildings, and in my case, hunting down geological activity.

Iceland ranks as one of the topmost photographed countries in the world. But in the land of fire and ice, constantly being shaped by geological forces, there is much more than the eye — or your digital camera — can see, and is perhaps one of the most interesting places on Earth to wander around with a thermal camera.

Since I wanted to image wide-angle landscapes in high resolution, and my thermal camera’s field of view was only about 24 degrees, I had to put together a DIY rig to panoramically scan the scene. I also simultaneously shot a black-and-white photo with a regular camera and a wide-angle lens for comparison. I then wrote my own program to color the black-and-white photograph with the actual thermal data, using a false-color scale which you see in the upper-right corner of every image. 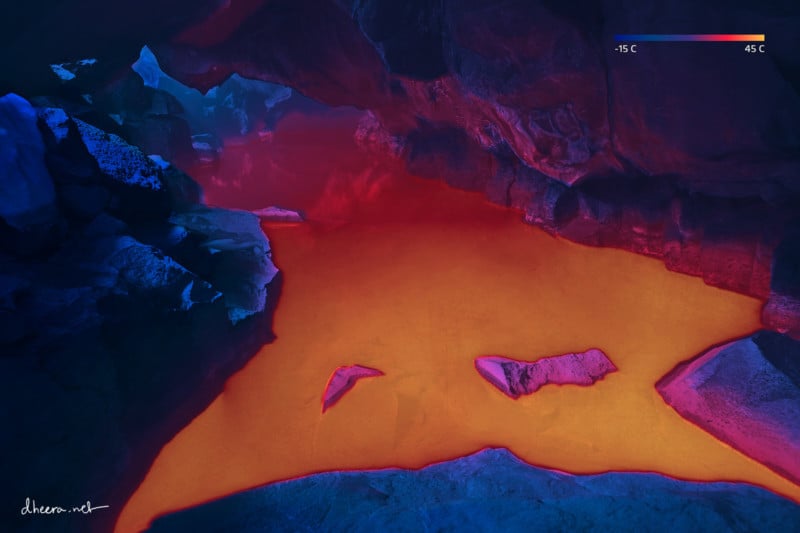 Grjótagjá is a small water-filled cave in northern Iceland and is situated beneath an active fissure. Between 1975 to 1984 the water reached temperatures of 50°C, but as measured here it has now cooled down to just under 40°C. This cave was the location of a scene in season 3 of Game of Thrones. Icelandic horses have been bred pure for more than 1,000 years, and have a double fur coat for extra insulation which keeps them warm through the harsh winter. They lose heat largely only through their eyes and mouth, which you see in this picture. Glacier ice breaks off and floats into the North Atlantic Ocean, sometimes to be swept back onto the shore. Although the waters are already at dangerously freezing temperatures, the glacier ice is actually significantly colder, so they take a relatively long time to melt. 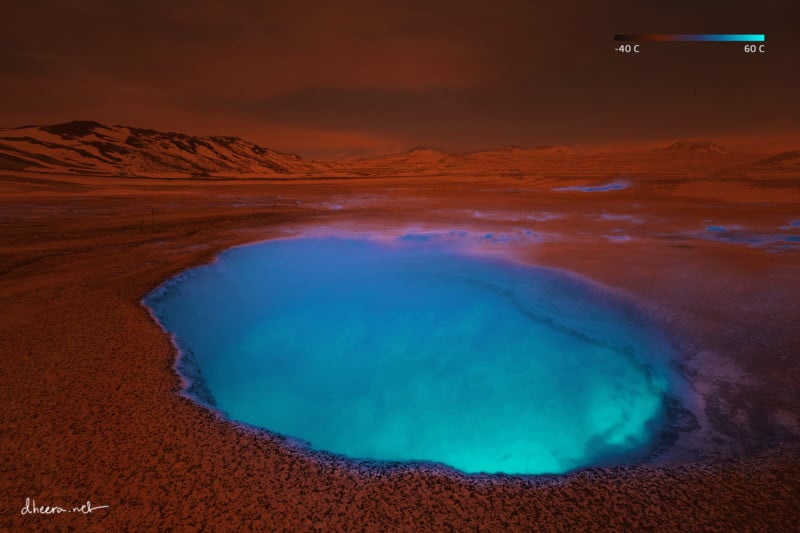 A fumarole is an opening in the Earth’s crust which emits steam and hot sulfurous gases. Here we see an extremely hot one at Námafjall Hverir. Strokkur, a geyser in Iceland erupts into the air with boiling-hot water. The word “geyser” comes from Icelandic. 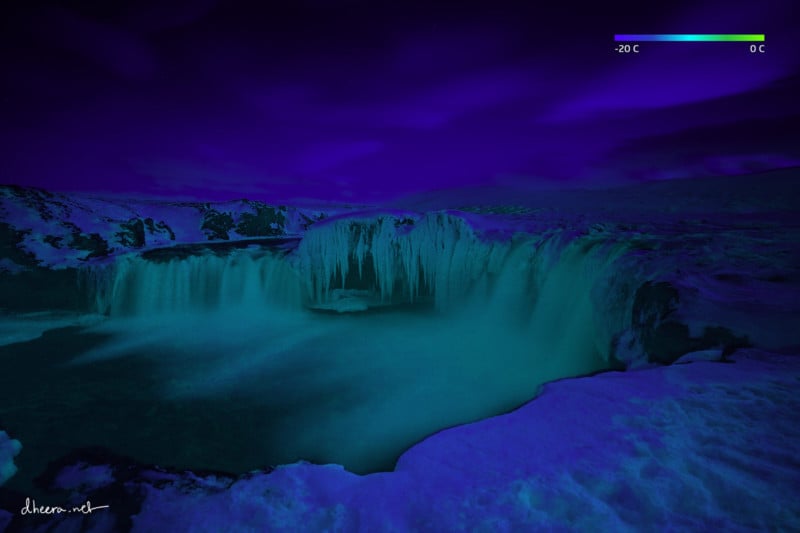 Iceland is well-known for its waterfalls. Most of them continue to gush through the winter, when super-cooled water is able to continue to flow despite being slightly below freezing. Located close to the Hengill volcano, Hveragerði is home to numerous hot springs and fumaroles. Through thermal imaging, it is also possible to locate them from afar and locate activity beneath the ground via differences in surface temperature. Here we see a stream of hot water, but the surrounding area is also warm from other activity beneath the surface. 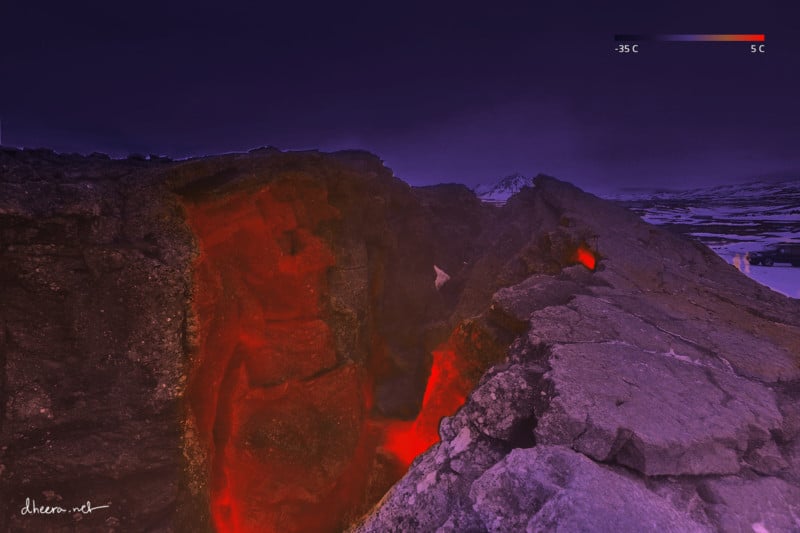 North America on the left, Europe on the right. Here we see one of the fissures where the two continents are slowly drifting apart, and a small amount of heat and steam emanating from below. Turf houses offer superior insulation to traditional building construction. This thermal image of a turf church shows just how little heat is being lost through the roof; most of the heat loss occurs through the windows. (Note: Glass windows are opaque to thermal cameras; the temperature measured here is the surface temperature of the window.) 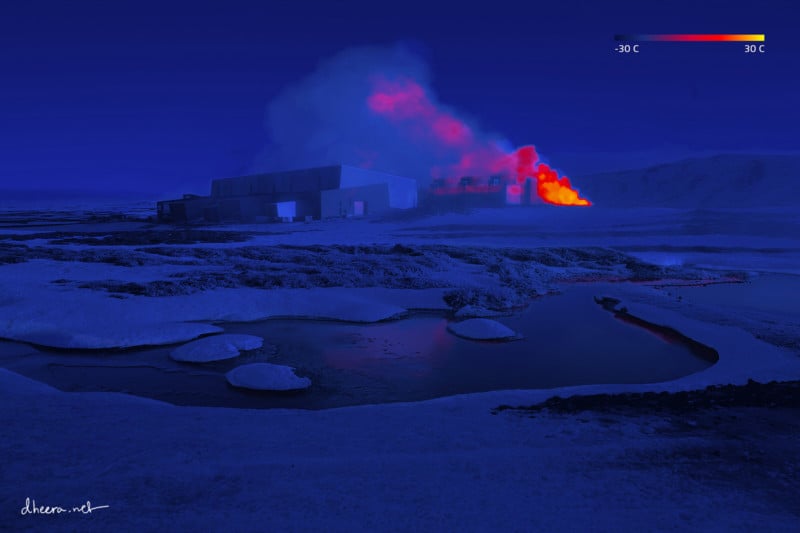 Iceland is a pioneer in the use of geothermal energy. A newly-built power plant at this geothermal field at Þeistareykir can supply up to 90 MW of renewable energy. A large iceberg breaks off from a glacier and floats into a bay, and is melted by the warmer waters beneath, as seen through the cracks. At the small hamlet of Búðir sits a famous church painted fully in black. A side effect of the black paint is that the entire building absorbs heat from sunlight rather effectively. (I am not sure if that was a consideration in its design, rather simply an interesting observation I was able to make.) 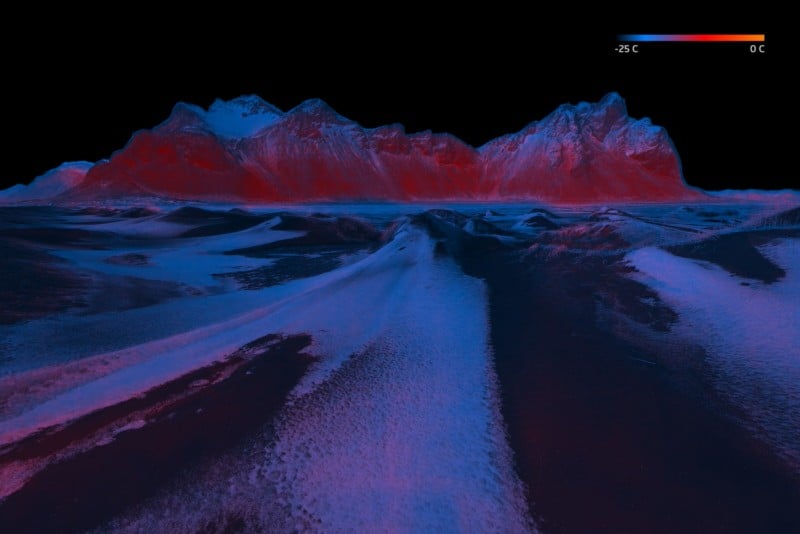 Winter in Iceland is a harsh time of the year. The black faces of the iconic Vestrahorn are heated up by the evening sunlight, yet these dunes in the foreground and the tops of the mountains are seen subject to fierce winds and colder temperatures.

Editor’s note: The author, Dheera Venkatraman, previously reshot old photos in China to see how scenes have changed over the past century.

About the author: Dheera Venkatraman graduated with a Ph.D. from MIT, where he worked on a new type of single-photon camera and co-founded Robby.io, a robotics startup in Palo Alto, where he works on computer vision, machine learning, and self-driving technology. The opinions expressed in this article are solely those of the author. When he is not working he enjoys combining art and science, and traveling to explore and do photographic projects. You can find more of Venkatraman’s work on his website, Facebook, Twitter, and Instagram.