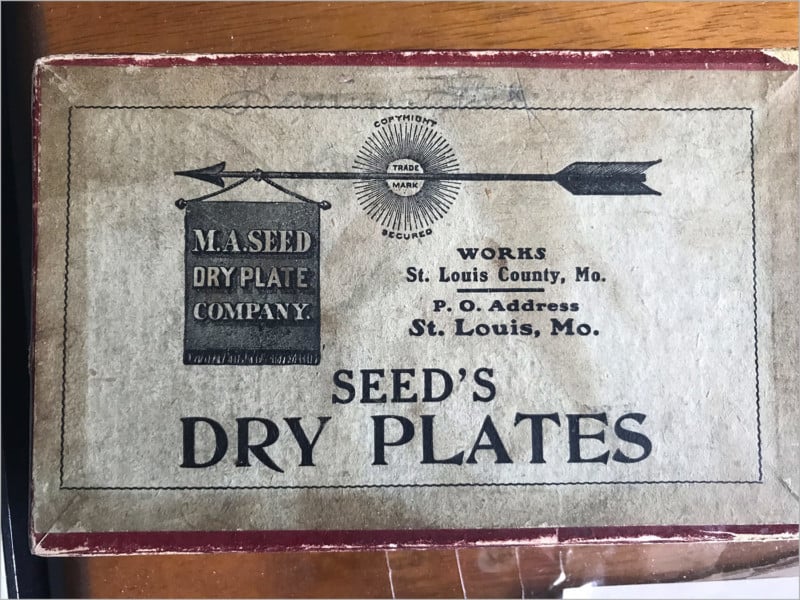 In my work travels, I recently met someone who gave me an interesting gift. Several years back he had been driving down a back road in Virginia and came across an old, abandoned farmhouse. He stopped and peeked in to see if anyone was using the place (you can’t be too careful about what you run across that looks abandoned these days), and saw only cobwebs.

He went in and found an interesting box by Seed’s Dry Plates. The company was founded in 1883.

Dry plate photography was developed after the wet collodion process. With dry plates, glass plates that had been factory coated with a photographic emulsion were boxed after the emulsion dried. They could be stored and loaded into cameras as needed and developed at any time after exposure. The process was therefore far more convenient than the wet collodion process, where glass plates had to be hand coated with a wet, light-sensitive emulsion just before exposure and then developed almost immediately thereafter.

The dry plate process was first introduced in 1871, and, in particular, the Seed Dry Plate Company was founded in 1883 and purchased by Eastman Kodak in 1902. That would date this box as well over 100 years old.

My friend opened the box and found exposed dry plates inside, which appear as a negative image! Recognizing that the farmhouse was obviously abandoned and that if he left the plates they would likely be lost forever, he took the box. After a few weeks of our working together, he found out about my interest in photography and one day brought the box in and gave it to me as a gift.

The dry plates themselves (of which there were 8 or 9) were not in particularly good shape, probably because that had been exposed to the elements for decades. This an example of one of the dry plates that was better preserved, with an apparent negative image:

I chose some that looked promising, put them on my flatbed scanner and scanned them. I then brought them into Photoshop, inverted the negative black and white image, added a bit of contrast and sharpened them. In some instances, I was able to produce a pretty reasonable image of people who are presumably no longer among the living. For example, this was the result of scanning the dry plate pictured above: 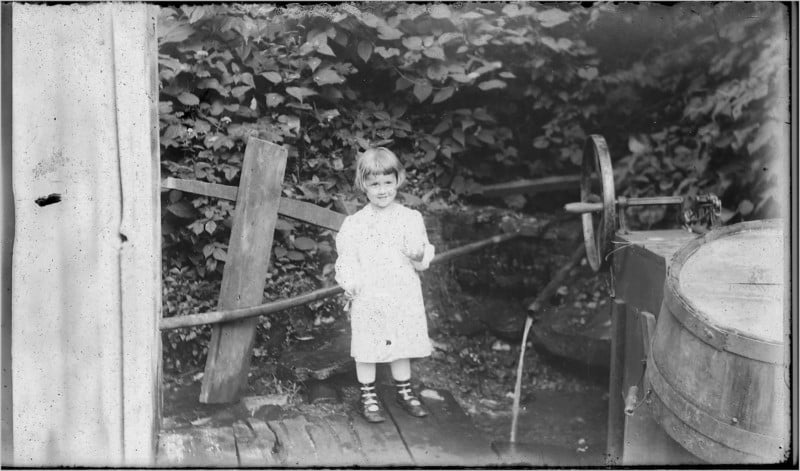 And for a closer, zoomed in look at the young girl: 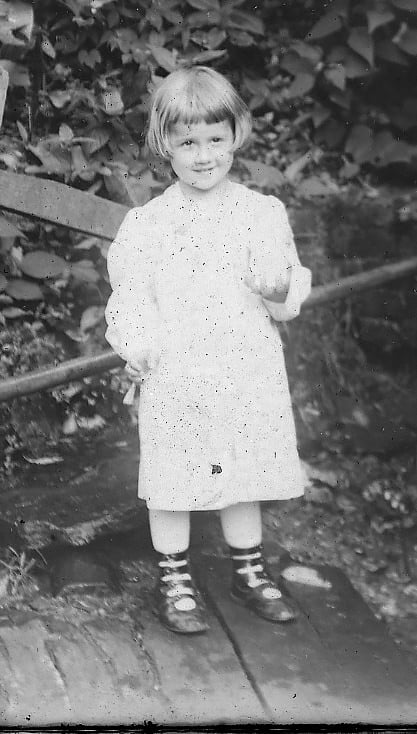 And another couple of examples. The many black dots are areas where the emulsion has degraded and worn off. I have to say that it is at the same time exciting and yet somewhat eerie to see people ‘reaching out from the dead’. 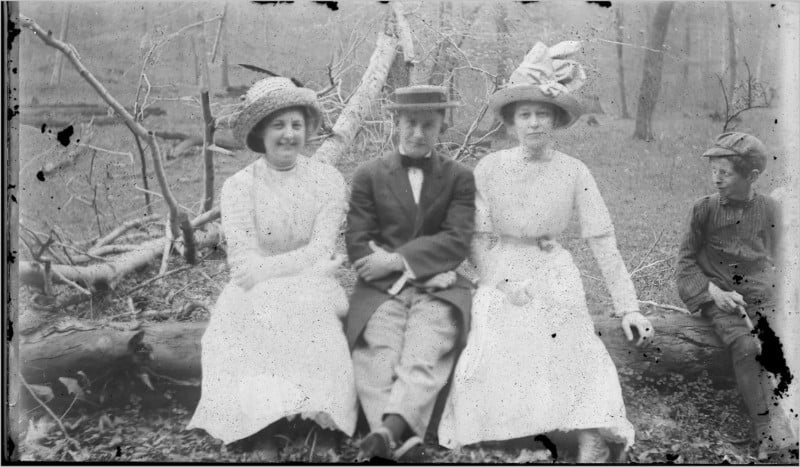 To me, this next image appears to be the same two women pictured above: 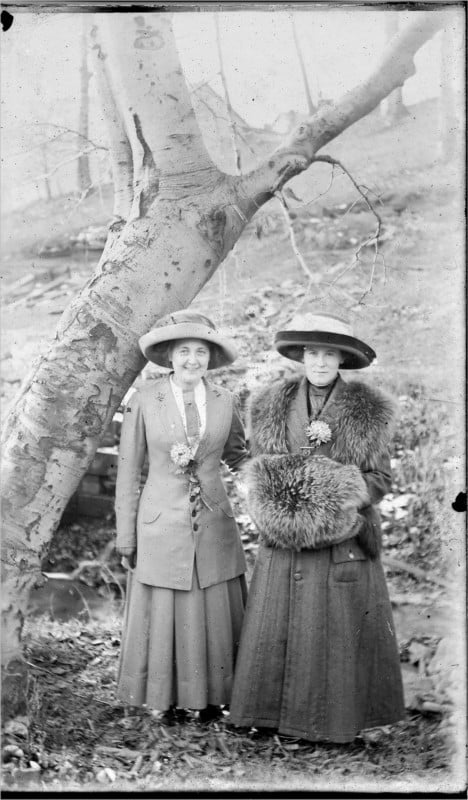 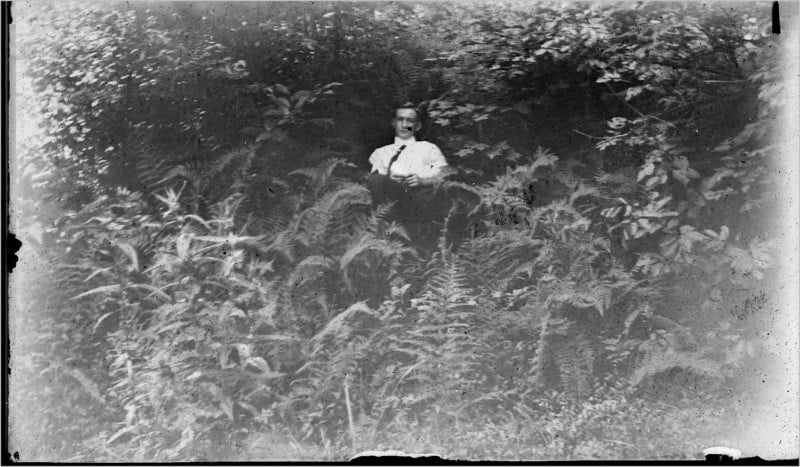 And this final image does appear a little ‘ghostly’. 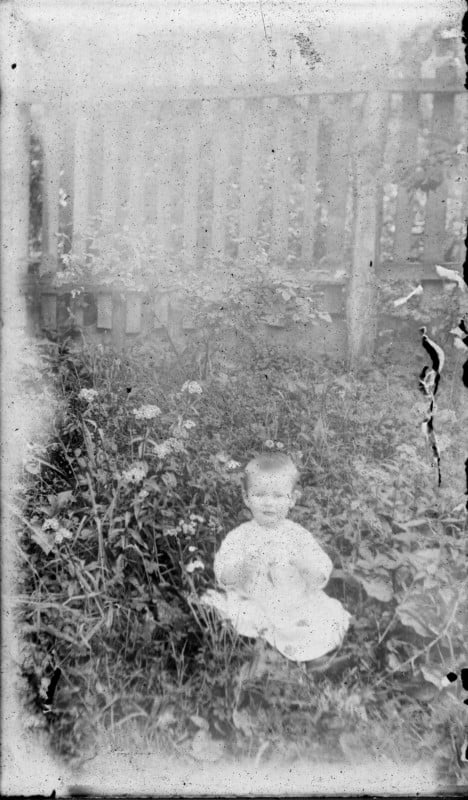 Perhaps this serves to bring back, in some small way, the memory of these people. Should any reader know who these folks are (I know the odds are one in a million, but stranger things have happened) do please let me know.

About the author: Howard Grill is a self-taught nature photographer. The opinions expressed in this article are solely those of the author. Grill’s artwork has been exhibited, published, and purchased by galleries and companies that include The Pittsburgh Center For The Arts, Spokane International Airport, Pittsburgh Public Library, and Starbucks. You can find more of his work on his website, Facebook, Twitter, and Instagram. This article was also published here.