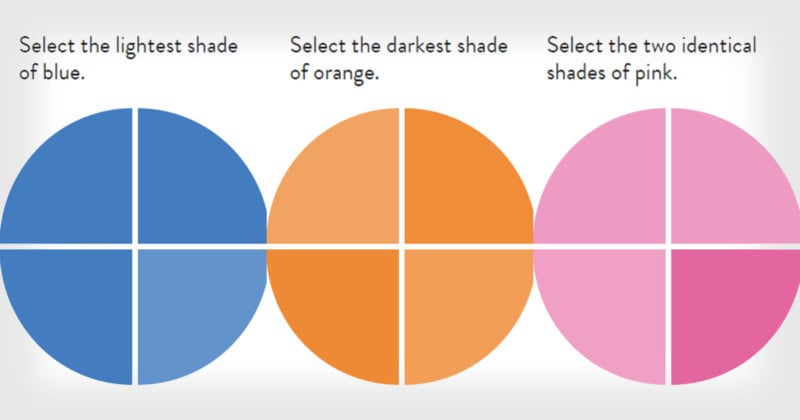 How do you think your perception of color stacks up against the general public? If you’re a photographer, have your eyes been trained to perceive color better than the average person? Here’s a short and sweet test that can help you find out.

The UK-based vision care company Lenstore has created an online test of 10 questions that challenges your ability to differentiate between shades of color. It’s a challenging test: of the thousands of people tested early on, less than 1% were able to achieve a perfect score of 10 out of 10. The average score was 6 out of 10.

The 10 questions ask you to perform tasks such as selecting the lightest or darkest shade from multiple options. You can do the challenge below (or here) to put your own eyes to the test:

The test found that about 50% of the general population get about 5 or 6 correct answers, while only 0.2% of people got all 10 correct. Another finding was that women seem to perceive color better than men — women scored an average of 57.7% while men scored 53.8%.

Color perception appears to decline with age: 31- to 35-year-olds performed the best (around 60% correct for both sexes) while those over 76-years-old only got about 30-40% correct.

“Color perception depends on several factors, including colour vocabulary, home country, and languages spoken,” Lenstore says. “The way we talk about color plays an important role in how we perceive it. English didn’t have a word for ‘orange’ until two centuries after the fruit of the same name arrived in Europe. Before then, the color was called ‘yellow-red.’

Light-Painting Portraits of Music Stars Shot in a Single Take