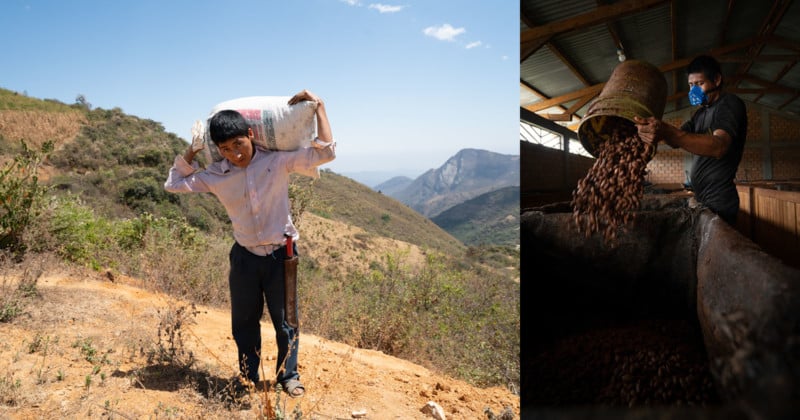 I was assigned by Fair Trade to go to northern Peru and photograph cacao and coffee production for the Australian and New Zealand markets. The idea was to show a little of the story of both products and the people behind them before they make it to your cup. I am a very enthusiastic consumer of both coffee and chocolate, in liquid or slab form. So as far as I was concerned, it was an assignment made in food heaven.

There were two things that surprised me when we arrived at our locations. The first was the distance between the actual locations and the accommodation. For one location we had to travel three hours (each way) before switching the cameras on.

The other fact, which was by far more disruptive to good photography, was that each and every person had to sign a consent to be photographed. I am not sure if that is a Peruvian ‘thing’ or Fair Trade ‘thing’, regardless, it was a killer for spontaneous people photography. 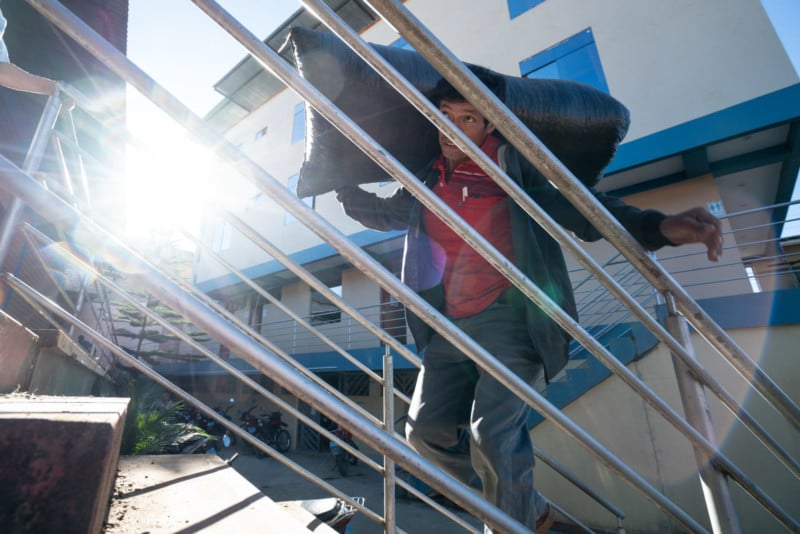 We started with cacao plantations, which grow in lush tropical regions of the country. It is the same environment that is suitable for growing cocaine (coca leaves) and, as we traveled along the roads, we were stopped at checkpoints, run by armed vigilante groups, that keep an eye on the coming and going in the district. There is nothing like an armed checkpoint to up your pulse rate. While very lush, the plantations were fairly ordinary to photograph as we were the only people in them at the time of the visit. Not so ordinary were the fermentation sheds. Cacao beans need to be fermented to bring out the best taste. Quality is counted in percentage, the more fermentation the better. The smell is overwhelming but the quality of light in these sheds was very compelling. So eyes one, nose nil. 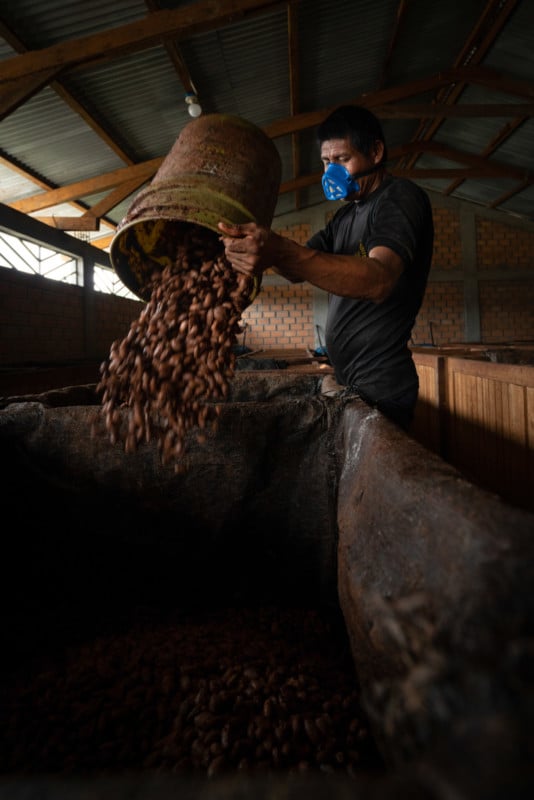 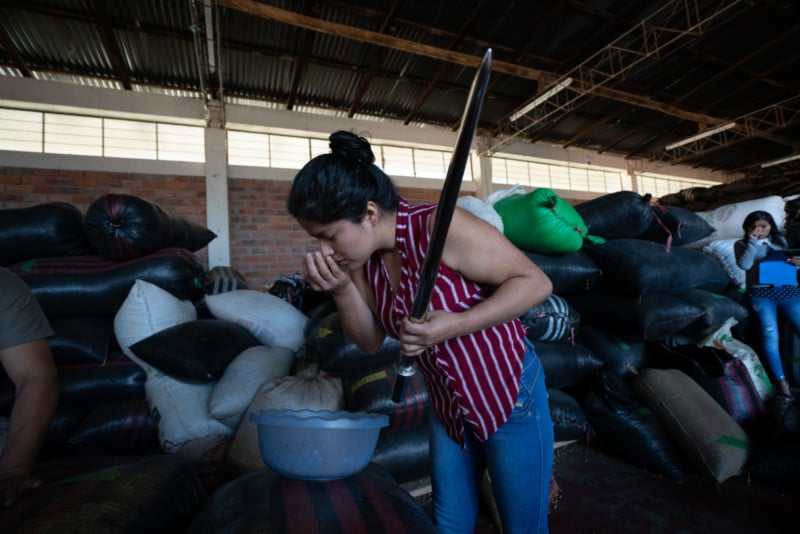 The whole system seemed to work on a lot of physical strength and very little automation. Each sack of beans weighs 64kg (141 pounds) and is moved into warehouses, and on to trucks, over the shoulder of one of an army of porters. Our host cooperative was called Acopargo. They produce 1,500 bars of chocolate a year. The bars are for checking quality and experience with flavors rather than a money-making venture. I bought two and they were the best chocolate bar I ever ate! If you are ever in the town of Juanjui, make sure you go to the little Acopargo shop and try one of these bars.

Good coffee growing conditions are found above 1600 meters (5249ft) above sea level. So, when we turned our gaze to the coffee part of the trip, we drove daily from town to a different family plantation, scrabbling along gravel roads that seemed to hang by a prayer along insane cliff-edges, in a car designed for my grandmother, with Bon Jovi blasting out “Ooooh we’re halfway there… Oooh living on a prayer…”. Tell me about it! Our driver had only one music CD. By this stage, I had decided that I was going to shoot whoever I could and let the Fair Trade person chase the people photographed for signatures after the fact. As I had very little time at each location, I used every trick in the book to try and get images of people without influencing the scene or their behavior by presenting a camera to their face. Most of the time it works. However, when you are in somebodies kitchen, for example, it is hard to not be noticed. 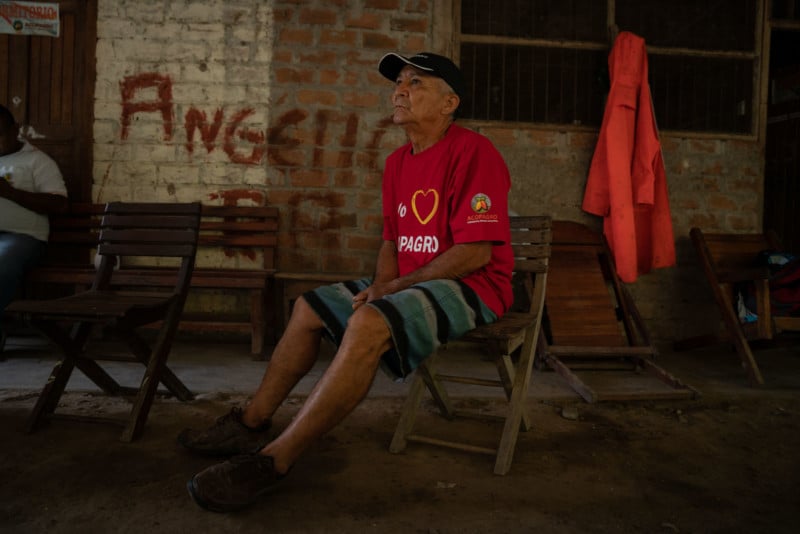 Hundreds of bags come into the warehouse every day and each is checked scientifically for moisture and the maturity of the beans. Then the experts test for taste and smell. The tasting is done at three different points as the coffee cools. Each temperature releases different aromas and flavors apparently. 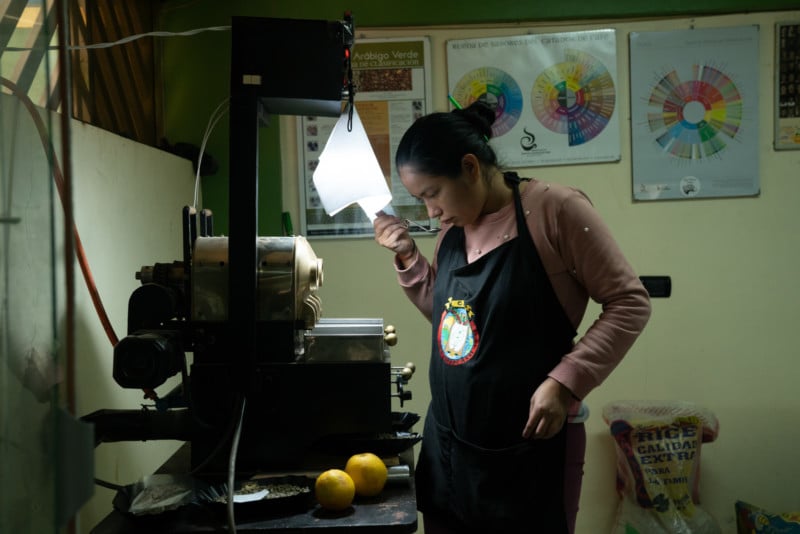 Our last stop was on the western side of the Andes in the north of Peru. 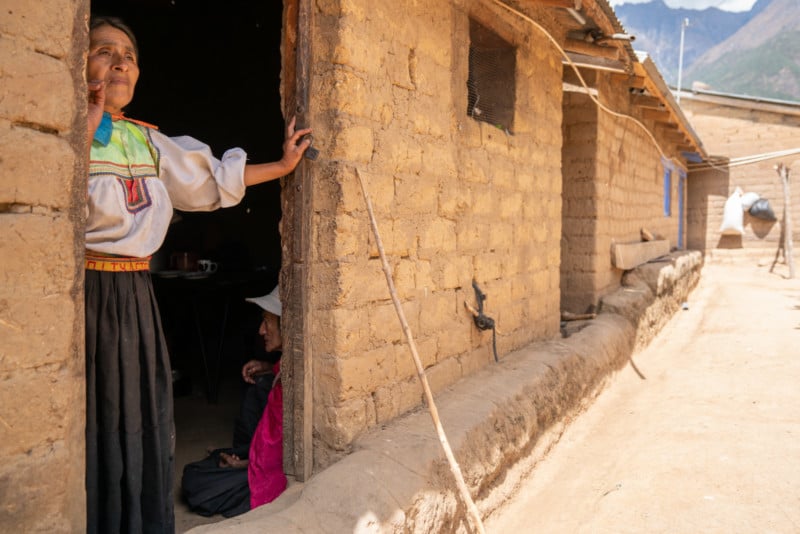 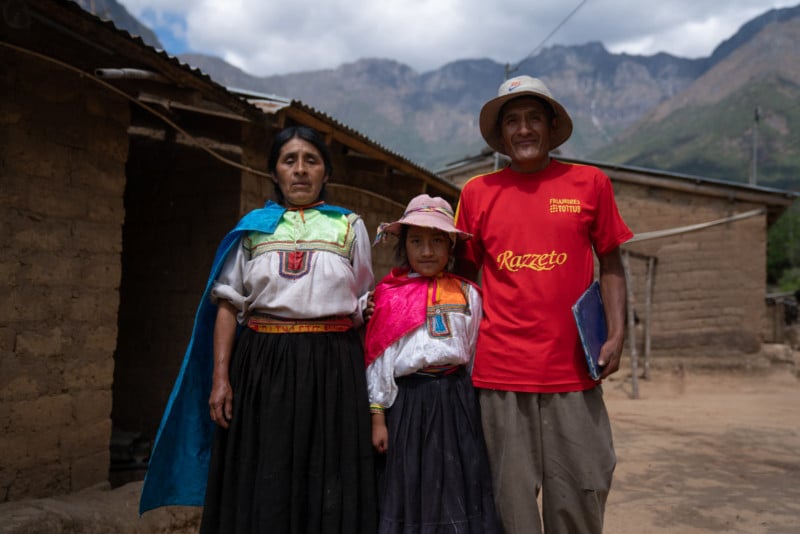 This side of the mountains was much dryer. The villages looked very traditional and the people looked less Hispanic and more Inca. The area is called “Corral de Piedra” (stone corral) The families live in very simple dwellings that expand as the family grows. Water reaches the villages by channels that are dug from a source some kilometers away and the plantations look like they are just clinging to life. Here, work is even harder as the coffee bags have to make their way to the gravel track from the valley below. 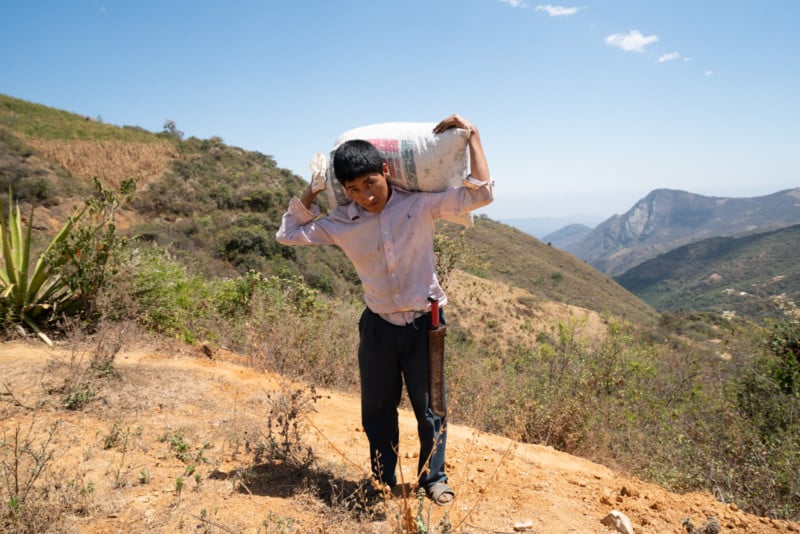 I used Sony a7R III and a bunch of Sony’s primes and a couple of zooms. Every day was a complete surprise to me and the limited time available to actually photograph pushed me towards the zoom lenses flexibility (16-35mm and 24-70mm).

I am a big fan of both EVF and eye focus. From a production point of view, I wanted as little post-production as possible after the shot was taken and EVF is a great help here. Since switching to the Sony a7xx series, I ignore the exposure indicator at the bottom of the viewfinder and completely rely on the EVF which lets me concentrate on timing and composition. Eye focus is a quick short cut from changing focus via touch screen or joystick. It happens to be very accurate on the a7R III, and as I am mostly people photographer, I use it a lot. It is hard work to produce both coffee and cacao. I am happy to pay a little more for my Fair Trade coffee/cacao so the people along the supply chain have a decent life.

When there are four Peruvian and two Gringos and there is only one chili to share between the six dishes. You better pay respect to that one chili!

Finally, a driver that almost kills you only twice along a five hour night crossing of the Andes is a good driver.

About the author: Giora Dan is a New Zealand based commercial and documentary photographer and educator. The opinions expressed in this article are solely those of the author. Dan has produced images for Panasonic Japan, Sony Asia Pacific, and Nikon Asia as well as geographic magazines and NGOs. More of his work available on his website and Instagram.

A Guide to Shooting the Milky Way