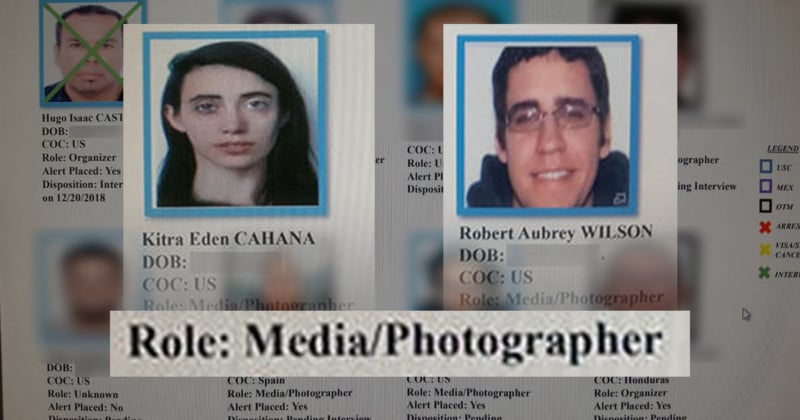 The US government has a secret database through which it’s tracking people tied to the migrant caravan, according to newly leaked documents, and found on the list are a number of photojournalists.

NBC 7 San Diego has published a set of documents received from a unnamed source in Homeland Security. The documents show that the United States created a list of over 50 journalists, social media influencers, and activists tied to the caravan that made international headlines in late 2018. And in some cases, alerts were placed on the people’s passports.

“[I]n the months that followed, journalists who covered the caravan, as well as those who offered assistance to caravan members, said they felt they had become targets of intense inspections and scrutiny by border officials,” NBC 7 writes. “One photojournalist said she was pulled into secondary inspections three times and asked questions about who she saw and photographed in Tijuana shelters. Another photojournalist said she spent 13 hours detained by Mexican authorities when she tried to cross the border into Mexico City. Eventually, she was denied entry into Mexico and sent back to the U.S.

“These American photojournalists and attorneys said they suspected the U.S. government was monitoring them closely but until now, they couldn’t prove it.”

The leaked documents, titled “San Diego Sector Foreign Operations Branch: Migrant Caravan FY-2019, Suspected Organizers, Coordinators, Instigators and Media,” show a list of people that have been fingered by the government for screening at the border. Alongside names are portraits, birth dates, roles, and more. Several of the roles seen in the photos published by NBC 7 read: “Media/Photographer.”

And NBC 7 reports that at least 3 of the photojournalists had alerts placed on their passports, preventing them from entering Mexico to do their work.

Freelance photojournalist Kitra Cahana, whose work has appeared in National Geographic and The New York Times, tells NBC 7 that Mexican authorities photographed her passport in December 2018 while she was working near the border. In early 2019, while traveling to Mexico, Cahana’s passport was flagged by both US and Mexican authorities. She was interviewed, eventually denied entry in Mexico City, and forced to fly back to Detroit.

According to NBC 7, its Homeland Security source decided to become a whistleblower due to the fact that dossiers were also being created for each person on the list — dossiers containing personal info ranging from work and travel history to the names of their parents to the car they drive.

“We are a criminal investigation agency, we’re not an intelligence agency,” the source tells NBC 7. “We can’t create dossiers on people and they’re creating dossiers. This is an abuse of the Border Search Authority.”

“It is protocol following these incidents to collect evidence that might be needed for future legal actions and to determine if the event was orchestrated,” says the U.S. Customs and Border Protection in a statement. “CBP and our law enforcement partners evaluate these incidents, follow all leads garnered from information collected, conduct interviews and investigations, in preparation for, and often to prevent future incidents that could cause further harm to the public, our agents, and our economy.”

CBP also tells NBC 7 that the database was created after violence broke out at the border in November and that the people on the list were those who were present. The journalists are being tracked for the agency to learn more about how the violence started, CBP says.

“This is an outrageous violation of the First Amendment,” ACLU attorney Esha Bhandari tells NBC 7. “The government cannot use the pretext of the border to target activists critical of its policies, lawyers providing legal representation, or journalists simply doing their jobs. We are exploring all options in response.”

Godox V1: The Affordable Round-Head Flash Rival to the Profoto A1