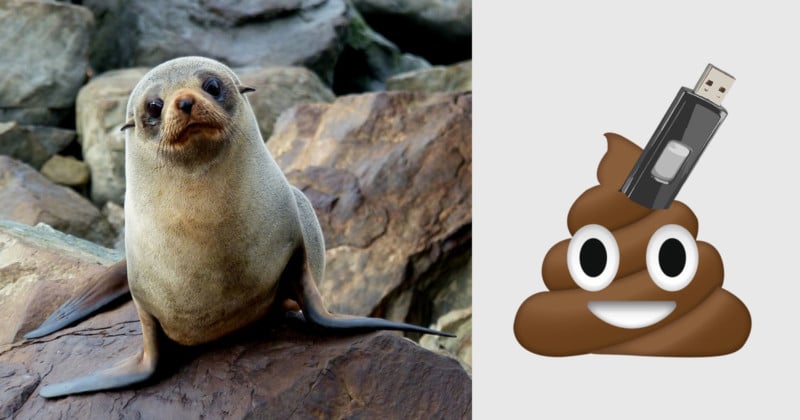 There have been plenty of stories of photos being found on lost cameras over the years, but here’s a wild lost-and-found story you definitely haven’t heard before. A USB drive has been reunited with its owner after it was found in a frozen slab of seal poo.

The National Institute of Water and Atmospheric Research (NIWA) in New Zealand announced earlier this week that while defrosting a frozen block of leopard seal poo that had been in freezer storage, marine biologists were surprised to find a USB stick embedded deep inside the scat.

The poo had been collected by a Kiwi vet who had been checking on the health of a skinny leopard seal on a beach in November 2017.

Scientists found that the USB drive was in “reasonably good condition” despite likely passing through the guts of a seal and spending a year frozen inside poo. And after drying out the drive for a couple of weeks, the researchers were surprised to find photos and a video intact.

NIWA then posted a video found on the USB stick to social media in an effort to locate the owner.

NIWA is searching for the owner of a USB stick found in the poo of a leopard seal…
Recognise this video? Scientists analysing the scat of leopard seals have come across an unexpected discovery – a USB stick full of photos & still in working order! https://t.co/2SZVkm5az4 pic.twitter.com/JLEC8vuHH0

Within a day, the owner of the USB drive was found.

Amanda Nally on when she found out her seal video and missing USB stick had gone viral: “The minute The Project promo come up actually… I was walking from one room to another and I was like… ‘that looks like…’” #TheProjectNZ pic.twitter.com/zyGVv4TYMc

On remembering the day she took the seal footage: “They’re endangered as kākāpō… To actually get to kayak with them is very special” #TheProjectNZ pic.twitter.com/5XNIYpDsUd

After a global search for the mystery owner of the usb memory stick that ended up in a #leopardseal poo sample being studied by @niwa_nz scientists – we can reveal the owner was close to home! https://t.co/gI5lnAzwb4

The brand and model of the USB drive hasn’t been revealed, but whatever drive it is can now advertise itself as being not only weatherproof but possibly digestion-proof as well.

Outdoor Photography Canada Closing: How It Made Me a Better Pro Photog