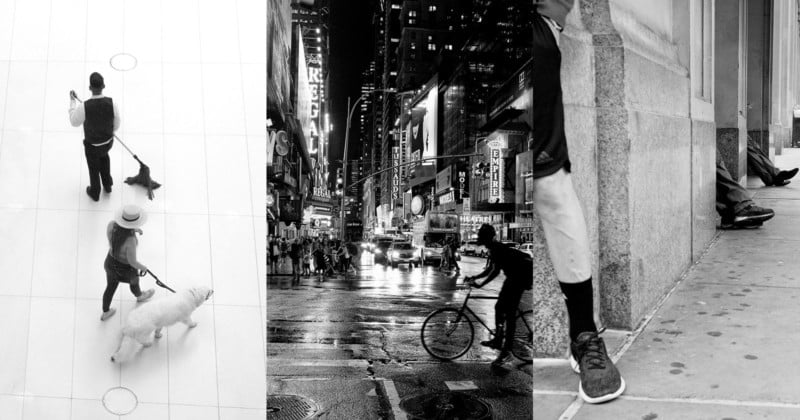 I’m not sure on what day I realized that my street photography work had become overly homogeneous, and sometimes asinine. “Oh look, a red car and a red shirt. click.” I’d been in love with the look of Fujifilm’s Classic Chrome (based off of Kodak Kodachrome) and had begun to shoot a lot of color for color’s sake.

But even if visually interesting at a glance, those types of photos weren’t saying what I wanted to say. They weren’t really saying anything at all.

There’s no shortage of reasons photographers choose to shoot black and white photographs.

1. It’s a way to visually isolate your subject, along with their gestures, expressions, and shape.

2. Leading lines become more obvious to the viewer. As a newer photographer, I found my compositions tightening up and getting cleaner.

3. It’s a fantastic way to eliminate loud and distracting backgrounds, like advertisements, on the street.

And, above all else, shooting in black and white reduces the image to its very essence. The tension between light and dark: 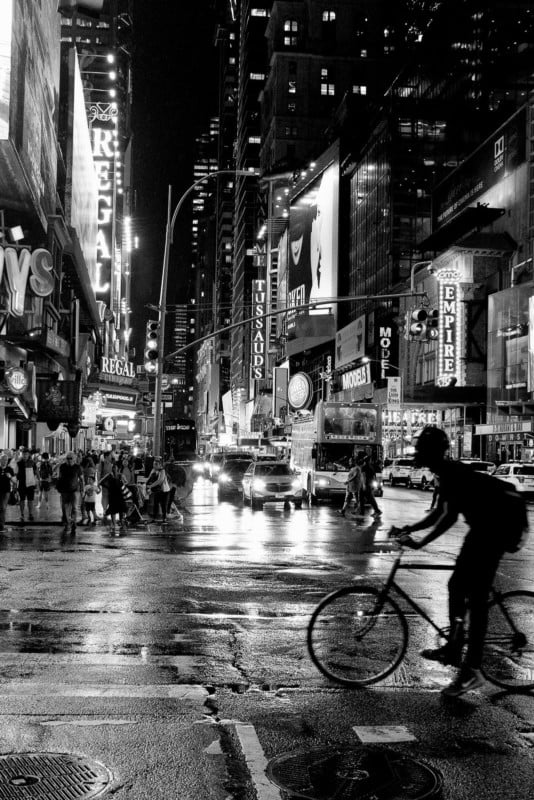 But for me? If I’m being honest? I just wanted to snap out of “red car red shirt” mode.

It was like an addiction, making the easy photos, and the only cure for me was quitting cold turkey. So I chose to ignore colors altogether. I didn’t know at the time that I’d continue this way for the entire year.

I should clear up a small detail that might be bugging some of you. I’m a digital photographer, and I shoot RAW. This means that each image file saved on my camera (a RAW image) is the entirety of the light and data captured by its sensor during an exposure. This, of course, includes color.

So how can I say that I shot “nothing but black and white” this year?

It really came down to mindset, and a simple camera setting (live previews —> Monochrome). Looking through the optical viewfinder (I shoot with a digital rangefinder now) means I see what the world looks like as if I were looking through a pair of eyeglasses. I’m still “viewing” color – just choosing not to “see” it.

But it’s amazing how a mental exercise like that can affect what photographs you choose to make.

I made this photo on day one: 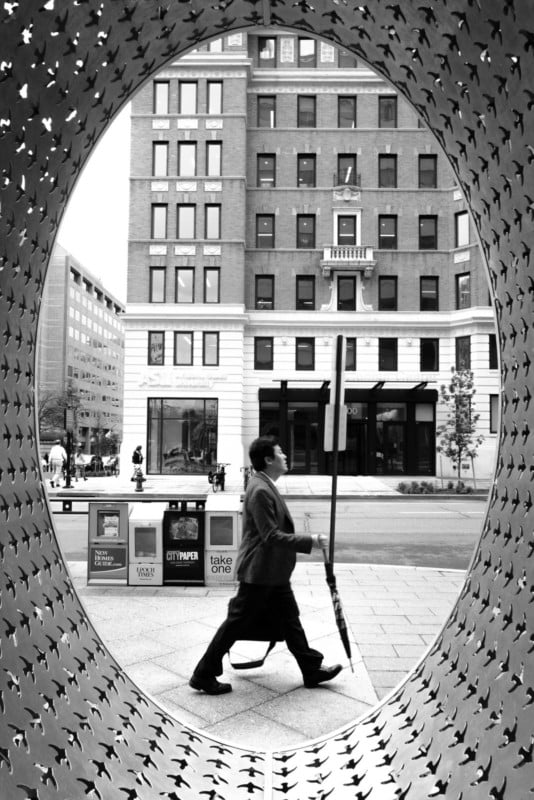 I had begun to search for scenes packed with texture, repetition, and geometry. The point was to deliberately make B&W images as if I had no other option. I found this sculpture of an X and O near Farragut West on I St. NW in DC.

In some ways, I’ve yet to top it. There’s something so creatively liberating when you first decide to change the way you see. I was so deliberate about including texture, depth, and shape. It didn’t really matter to me who walked through that day. I just needed to time it right. This was a visual exercise.

As the weeks went on, I did less run and gun shooting. Instead, I went further into the habit of composing a scene and waiting for a subject to walk through. The chaos of the street faded away into studies of isolated subjects. My photos started saying more. 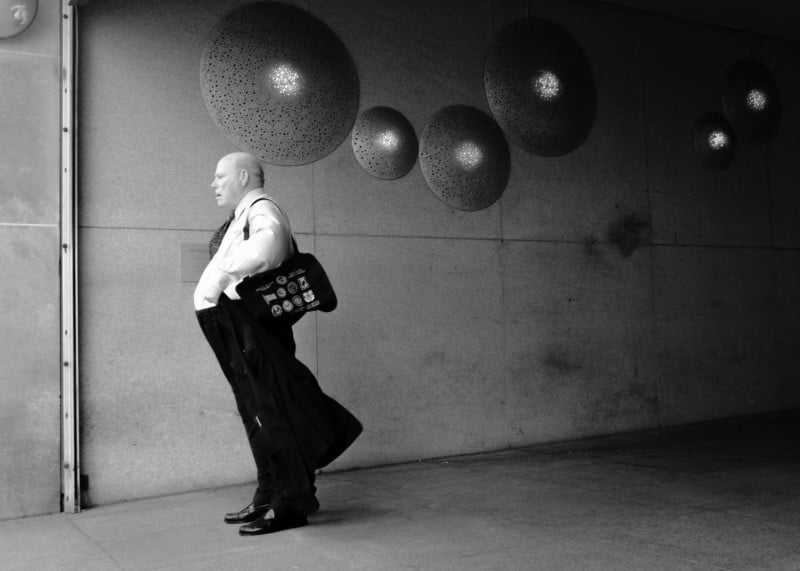 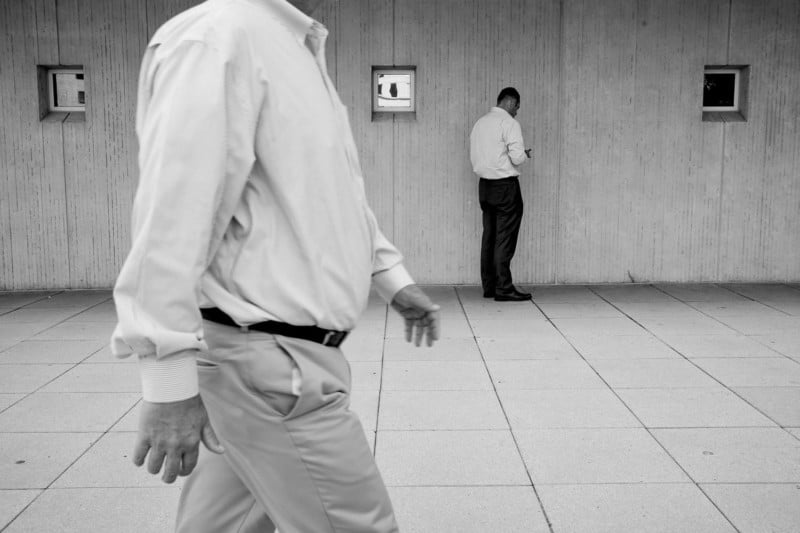 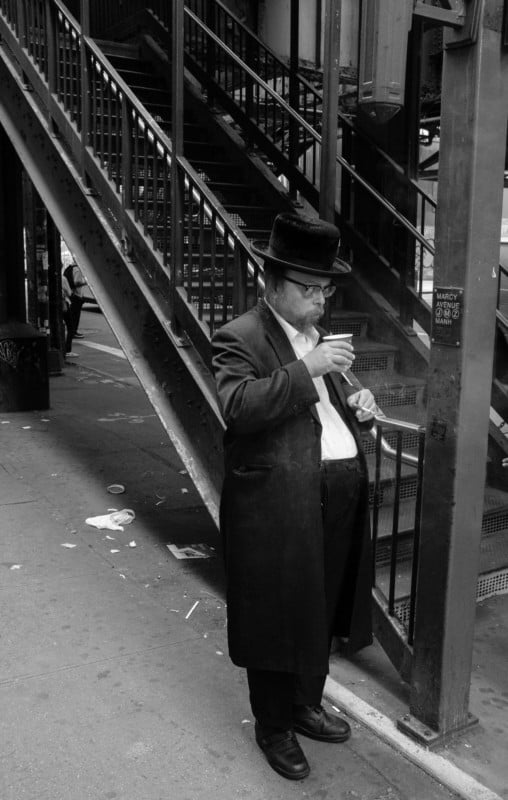 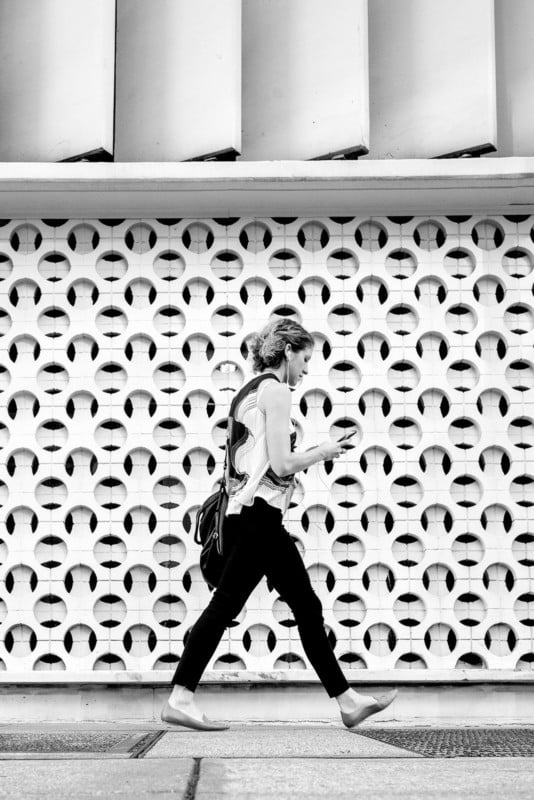 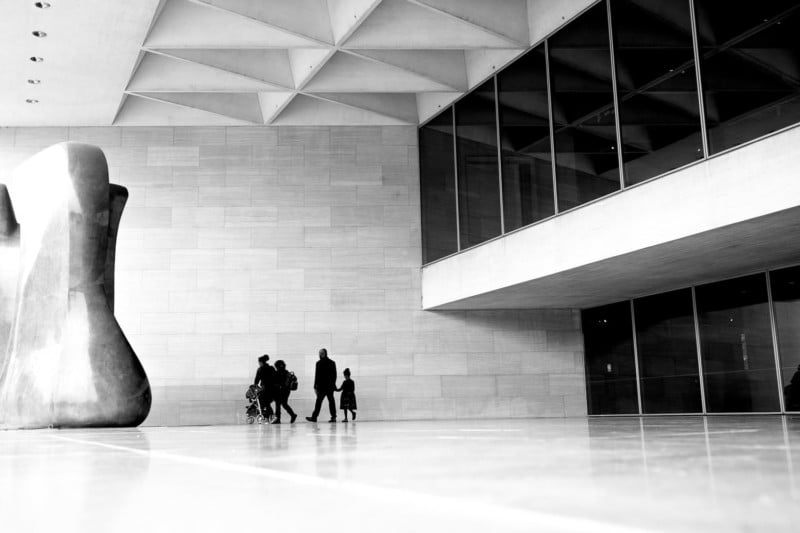 My work began to fixate on symbolism, the loneliness of the city, and wit. Like in the above photo, I found myself more drawn to architecture. Its strong lines make for more decisive compositions.

And then something else totally unexpected happened: I started shooting vertically, in portrait orientation, for the majority of my photos. I began to study photographers like Ralph Gibson, who among many other things is known for his Vertical Horizons series and shooting 95% vertically. It helped to further eliminate distracting elements in my work. After all, most of the chaos of the street is… on street level. 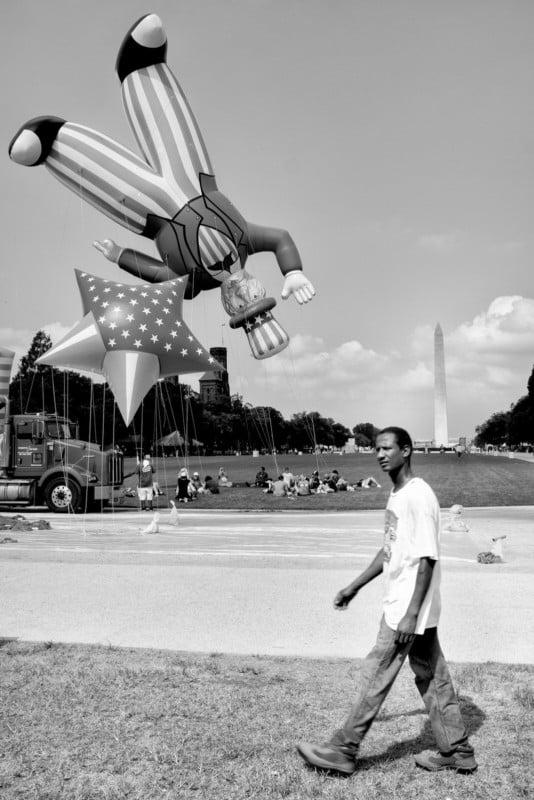 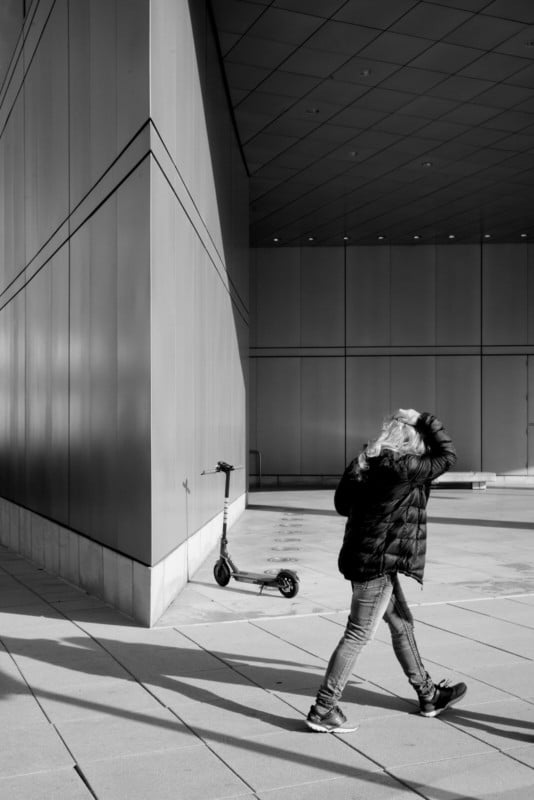 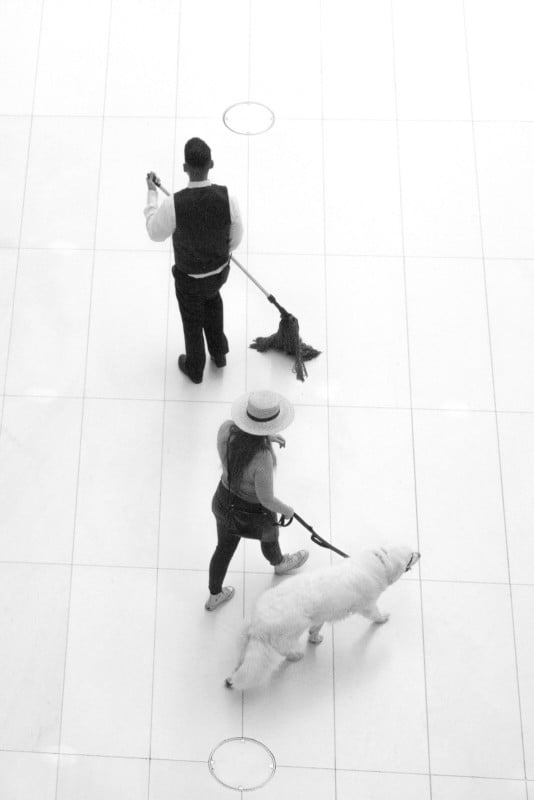 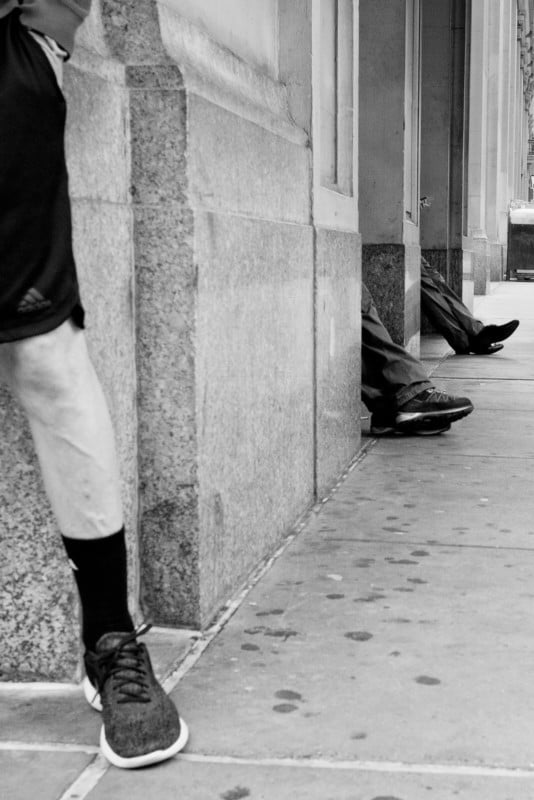 Shooting this way kind of became its own habit, yet one I didn’t seem eager to correct.

Fast forward months up to this weekend, the last one of 2018, and I’ve decided it’s time to allow color back into my work.

These are from the last 24 hours: 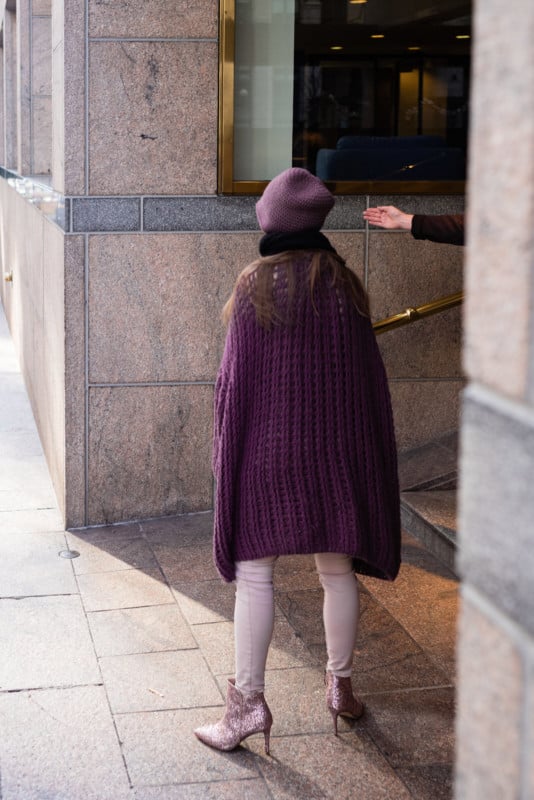 I’m seeing geometry, layers, and gestures. I have a new love for shadows. 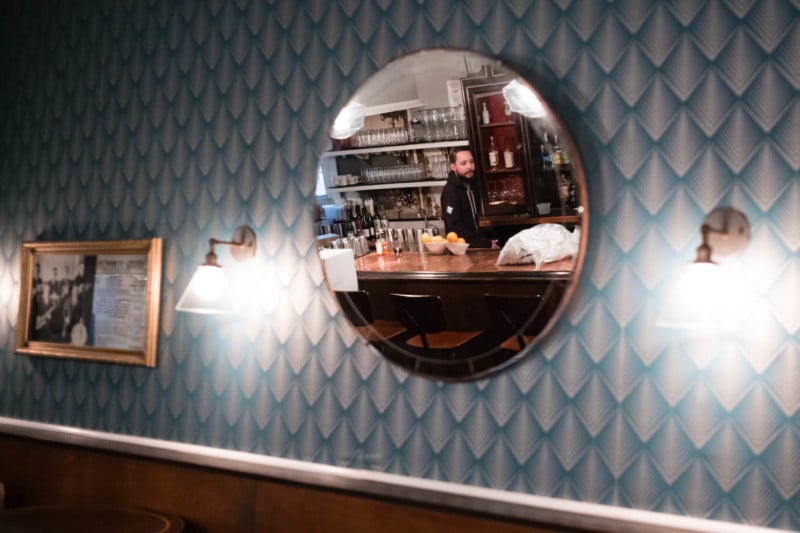 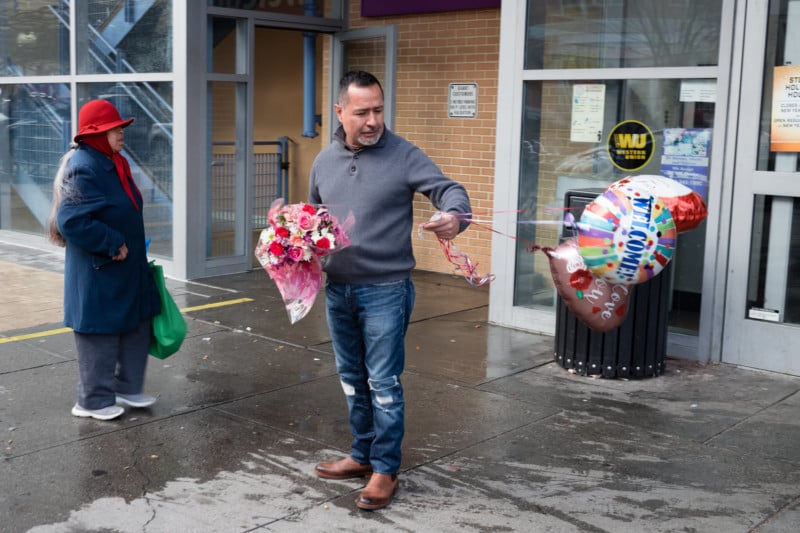 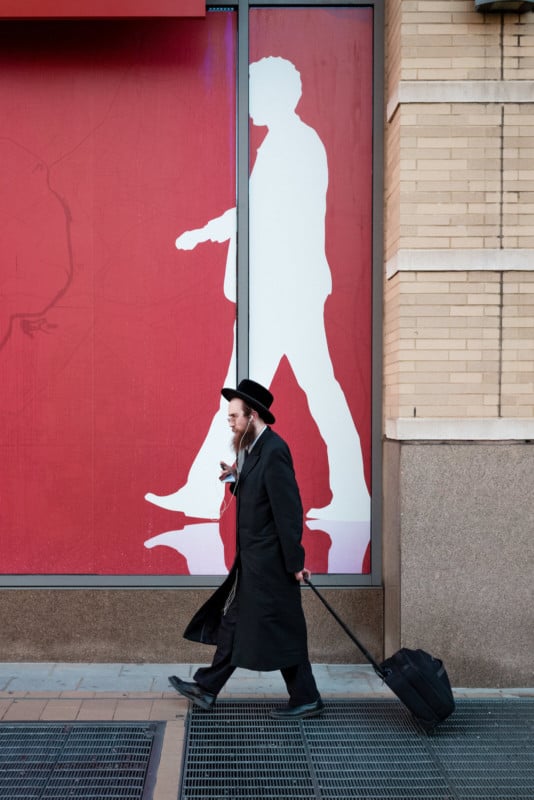 And I’m seeing more serendipitous moments, both vertically and horizontally.

If you’ve found yourself shooting “red shirt, red car. click.”, consider shooting monochrome for a month or two. Or a year. It’s pretty amazing that it can change how you shoot, and what you see.

About the author: Mike Jett is a visual storyteller based in Washington, D.C. The opinions expressed in this article are solely those of the author. You can find more of his work on his website and Instagram. This article was also published here.

This 4K Timelapse is a Dazzling Tribute to New York City

Capturing the Beauty of Fall in Slovenia with Photographer Karen Hutton