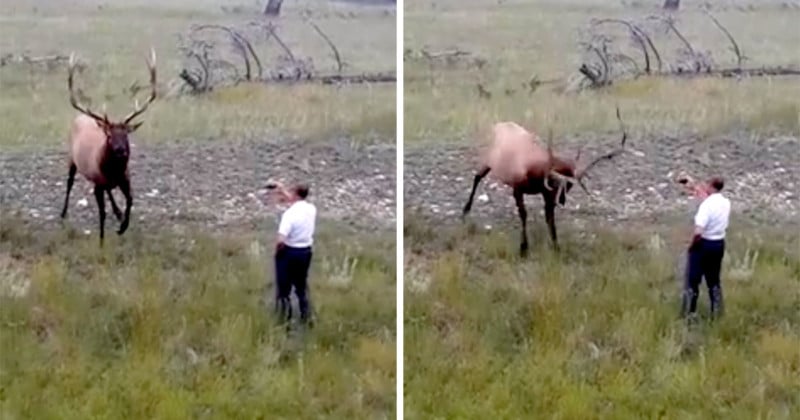 When photographing wild animals in the great outdoors (especially big ones), it’s important to stay at a safe distance for the good of both you and the animal. But one sightseer in a Canadian national park was recently seen giving a masterclass in how NOT to shoot from a reasonable distance.

Sundog Tours guide Kendra Neef Nace was giving a wildlife tour in Alberta’s Jasper National Park back on August 23rd when her group came across a large elk.

While her tour group watched the elk from the roadside, a man who was traveling with his family (and not part of the tour) decided to walk up to the elk for some close-up shots with his camera.

The man only ran away when the elk started lowering its antlers and apparently getting ready to charge. Nace caught the incident in this 16-second video:

“This man was not one of my guests,” Nace tells PetaPixel. “We were viewing this elk and his harem when this man approached. I shouted out the window at him multiple times that it was dangerous and recommended he return to his car. He laughed and waved at me saying it was fine, and that’s when I started recording.”

Nace says that this type of incident is unfortunately quite common in national parks such as Jasper and Banff.

“Unfortunately many tourists don’t recognize the danger that potentially comes with approaching wild animals, especially during mating season,” Nace says. “This man was extremely lucky that the elk didn’t make contact, but eventually the animal will lose its patience and someone will get hurt.

“And often that ends in the termination of that animal because of ‘public safety’.”

Back in 2013, a photographer in North Carolina’s Great Smoky Mountains National Park was filmed getting into a headbutting match with a young elk.

The photographer had been shooting from “a safe and respectful” distance before the elk approached. After the video went viral, the elk was killed by park authorities for the safety of visitors because it “could not be re-trained to be fearful of humans.”

Nace says that while her video above is the worst incident she’s been able to catch on camera, she has seen everything from tourists trying to feed bears to people trying to pet elk. And when things go wrong, it’s often the animals that also suffer the consequences of people’s actions.