The brief: Showcase the capital city of camera makers, for one of its most iconic names, using the prototype of its first full-frame mirrorless camera. Could the stakes be higher?

So I’m on a rooftop in Tokyo. 400 meters away a giant bunny awaits instructions. Around me, a behind-the-scenes crew tracks my every move. In front of me, trained on the bunny, four of only 10 existing prototypes of Nikon’s much-rumored new mirrorless camera. Concealing the cameras from public view, four bobble hats (knitted by my Grandma). Beside me, the client, nervous — not least because behind me, people are trying to glimpse what’s under those bobble hats. The bunny is ready. Everything is ready. The client just wants it to be over. Action.

Being asked to make a flow motion of Tokyo for Nikon felt like a call from the mothership — the ultimate commission. Doing it with exciting but unproven prototype kit doubled the stakes. So what was it like shooting Tokyo Seamless?

All in the planning

The key to amazing creative work is the boring bit: planning and recon. It’s that strange space in which days can pass with nothing to show for your time. Resisting the urge to pick up a camera and get the validation of some pretty images is really hard.

But gradually a storyboard starts to emerge. I liked the idea of following a character as a small detail, on a journey finding objects — possibly balloons. The idea evolves: a series of almost 2D graphic plates in which our protagonist moves right to left, experiencing the sites of Tokyo. The client likes the idea of an Alice in Wonderland theme — complete with a large bunny. This is getting good.

Knowing what you want in advance gives you time to make sure you can have it. We wanted the talent holding a balloon, but It turns out helium is up there with improvised explosives on the list of things building managers hate. So we found (after much debate) another way to keep the balloon up: a slender but rigid stick.

Non-disclosure can be a big deal

Mirrorless has been this year’s big talking point. Back in July, Nikon’s Z7 was still one of the industry’s best (soon to be worst) kept secrets. Which was when I was handed four of only 10 of the prototypes in existence. I don’t even know it’s called the Z7. Rather charmingly the cameras are disguised in black tape, and it’s not until I download my first raw file and check out the metadata that I learn the name.

Sometimes, signing that NDA is a big deal, with people’s livelihoods at stake. Holding the taped up camera, I think of stories about product launches blown by unassuming social media images finding their way to photography blog sites in Japan. You don’t want to be that guy. The pros and cons of working in beta

Being a professional means knowing your kit inside out — and if you can’t get hold of it before the shoot you’d better get reading up online. But what if the camera doesn’t exist yet?

I arrive on the first shoot with this all-new device, knowing I’ve got two hours to deliver the shot before heading to the next. The silence is terrifying — I’m used to the sound of clicking, and having several cameras firing simultaneously without a sound feels freaky.

The camera body in my hands is the same as the now familiar production model however the firmware is being constantly updated. I’m essentially working in Beta. Scary, yes — but I can’t deny it’s a powerful way to expand my comfort zone. It forces innovation. And there’s an added bonus. Shooting for a camera manufacturer means I can ask questions and involve them in issues. Things I’d never normally dream of sharing with a client. Without time to test new features and work out the best options, the client becomes a lifeline.

I’m told that if you take an element from a NIKKOR lens and enlarge it to the size of Tokyo Dome stadium, the largest imperfection would be less than the thickness of a single human hair, even at this scale. Every client can be exacting, but the stakes are extra high with this shoot. It’s stressed to me time and time again the new Z system is all about quality, edge to edge sharpness. Every shot has to be technically perfect. One of the deliverables is an 8K edit. Which means in effect every frame can be taken and printed at billboard size. When you’re spending 16+ hours a day shooting, small differences to your workflow can really eat into the amount of sleep you get. Being a prototype, the camera’s NEF files weren’t supported — and that killed my workflow. A workflow dependent on Adobe Camera Raw and LR Timelapse. An issue compounded by the need to scrutinize and test all the new features. It all adds up to 1-2 hours extra work each night using a complicated workaround to review shots and test features. Frequently resulting in less than three hours’ sleep— which over the course of two weeks really adds up.

Post-production can work miracles, but great landscape and cityscape shots still need great light, or at least some sun. Tokyo is hot and humid in summer and after a few sunny days of shooting, a big wet grey depression moves in. We’ve double-booked locations to allow for this, but losing the first attempt to weather puts all the pressure on week two. Things come to a head at Mt Fuji. Once again it’s raining. But then — a break in the clouds. Would the sun make it into the gap and light up the sky? Or would the clouds close in and deny us the shot? And the best thing about timelapse is…

Projects tend to take you through the full emotional spectrum. This time, at Mt Fuji, the light came good, the wind dropped and the lake in the foreground fell totally still. We got the shot — and while shooting the nightfall I got to appreciate the best thing about time lapse — that there’s not much more or less to do than just be there and witness the wonder of the scene you’re capturing. It was a special experience: now I understand why Mt Fuji means so much to the culture of Japan.

Human genius at the heart of the corporation

My other big take away from Tokyo Seamless was that, beyond brand loyalty and behind the giant corporations, the lifeblood, ideas, and technology of the entire camera industry are in the hands of maybe less than 10 geniuses. People with total dedication to their craft and to making the next great camera. Pretty amazing when you think of the global impact their designs have on our world and the worlds we in turn influence. 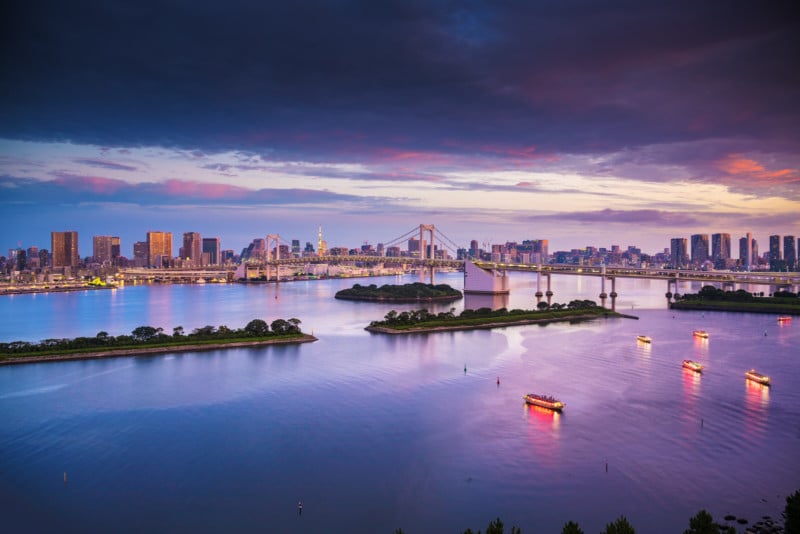 Would I do it again? For sure.

About the author: Rob Whitworth is a BAFTA winning EMMY nominated film maker. The opinions expressed in this article are solely those of the author. Whitworth’s unique flow motion works are instantly identifiable. You can find more of his work on his website, or by following him on Facebook and Instagram.

Photopea is a Free Photoshop Clone That Runs In Your Browser

How NOT to Use a Reflective Umbrella