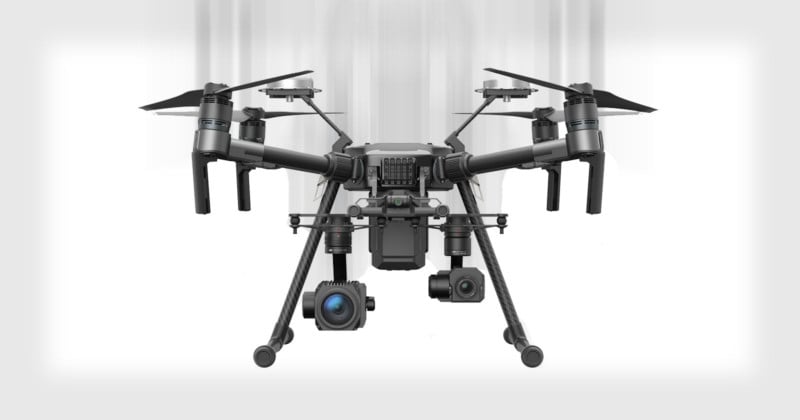 If you fly a DJI Matrice 200 drone, beware: there are reports of the drone losing power and falling out of the sky. DJI says it’s currently investigating.

BBC News reports that UK police have grounded the drone after a police drone “experienced an in-flight issue” and landed onto the roof of a commercial building. Officials later stated that some of the drones suffered a “complete loss of power during flight.”

The UK’s Civil Aviation Authority (CAA) then followed up with a notice warning that a bug can result “in the aircraft falling directly to the ground,” even when the battery still holds a charge. As a result, the CAA is advising that operators stay at least 50m (164ft) away from (and never directly above) people, vehicles, and structures.

DJI quickly issued a notice last Friday acknowledging that it received reports of the issue and vowing to investigate and fix the problem.

DJI followed up with another notice today advising owners to fly with caution if they use TB50 and TB55 in their drones.

“DJI is investigating reports that a small number of batteries have shown incorrect power levels that have led to loss of power mid-flight,” DJI writes, saying that it’s working on a firmware update for the affected batteries that will provide “improvements to flight safety.”

You’ll be able to download the firmware fix through the DJI Pilot App in the “coming weeks.” Until then, DJI is instructing owners to land and recharge when their batteries reach about 30% of their capacity.

These latest reports are reminiscent of the disastrous launch of the GoPro Karma camera drone back in 2016, when owners also had their drones plummet mid-flight. GoPro quickly recalled the Karma and later determined that the power loss was caused by a faulty battery clasp. The Karma was returned to the market, but it wasn’t able to find a place in an industry dominated by DJI — GoPro announced in January 2018 that it would be killing off the Karma and exiting the drone business.

(via DJI via Engadget)

A Recipe for a Little Red Riding Hood Photo Shoot

I’ve Never Flown a Drone. Here’s My Review of the DJI Mavic 2 Pro