Want a challenge to test your shutter finger reaction time as a photographer? Try capturing a bullet train zooming out of a tunnel up close. That’s what Japanese photographer Kunihiko Tsuji demonstrates does in the video above.

The video is a 2009 episode of Begin Japanology on the subject of Shinkansen, or the bullet train network in Japan. At 19m05s in, the episode introduces Tsuji, a hobbyist photographer who has been focusing his lens on shinkansen for decades now. His skills in the niche have become legendary among photographers, and images of bullet trains from his 50,000-photo archive have graced the covers of magazines.

In addition to the challenge of capturing beautiful photos of whole speeding trains in one frame — something that requires a significant amount of planning and preparation — Tsuji also aims to capture other difficult-to-snap views.

At 24m20s into the episode, Tsuji attempts to photograph a 300km/h (~186mph) bullet train emerging from a tunnel from just several feet away. Since he can’t see the train approaching, Tsuji relies entirely on sound to time the shot.

Working at shutter speeds of around 1/8000s, Tsuji planned to press the shutter for a single photo when the train is just 5 meters (16.5 feet) away from him. The window for capturing the shot he envisions is just a fraction of a second. 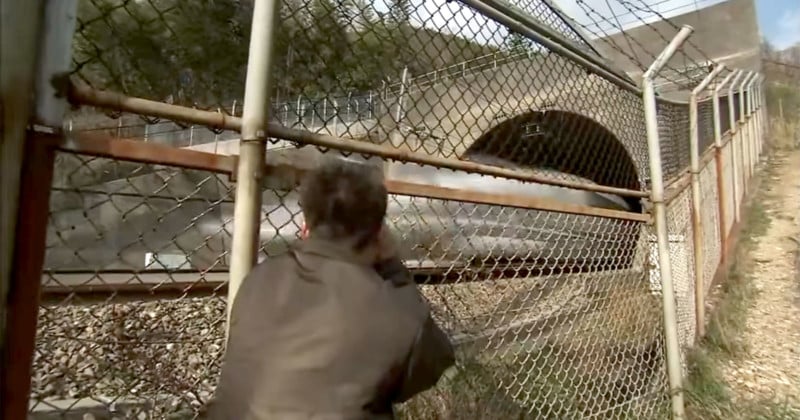 Here’s what Tsuji managed to capture with his single press of the shutter:

If you’re wondering why Tsuji doesn’t just rely on his camera’s burst mode, it’s because the train is traveling about 83 meters every second. Even with a relatively fast continuous shooting speed, the train’s position in the frames would still be unpredictable and out of Tsuji’s control. Thus, capturing a single shot based on sound allows him to try for a specific composition.

Tsuji believes he could have done better to create an even more perfect shot.

“50 centimeters — that’s 5 millimeters in this photo,” Tsuji says. “If I had shot the train just that much further ahead, this photo would score between 90 and 95 points.”

“Tsuji’s quest is for Shinkansen moments that no one has ever photographed,” Begin Japanology says, “and his thirst for perfection just cannot be quenched.”

This is What a Drone Strike Would Do to an Airplane