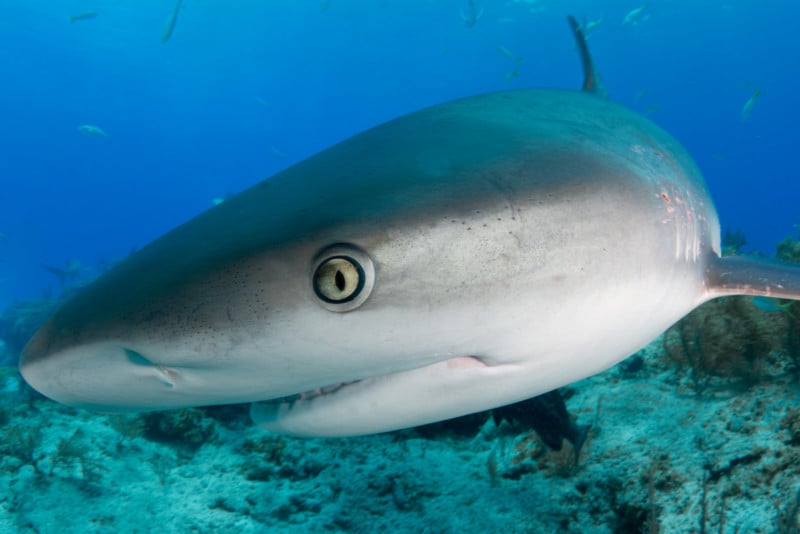 How would you feel if you were standing at the stern of the boat as twenty 10-foot lemon sharks circle at the surface in front of you and in the depths below an even larger tiger shark cruises the algal reefs? Would you make that jump into the water, with nothing between you and these apex predators? Would you keep your calm?

These are the questions that I find running through my head as I begin prepping my gear to make the trip out to tiger beach in the Bahamas. It’s the first time any doubt has crept in since planning this shoot a year before. Back then it had seemed easy — I’ve swum with sharks before – maybe not as big as the colossal tiger shark, which is the second biggest predatory shark in the world, but how hard can it be?

Besides, I have had a lifetime of experience with topside predators, so at the time none of this had begun to cross my mind, but as the shoot draws closer, reality is beginning to sink in. 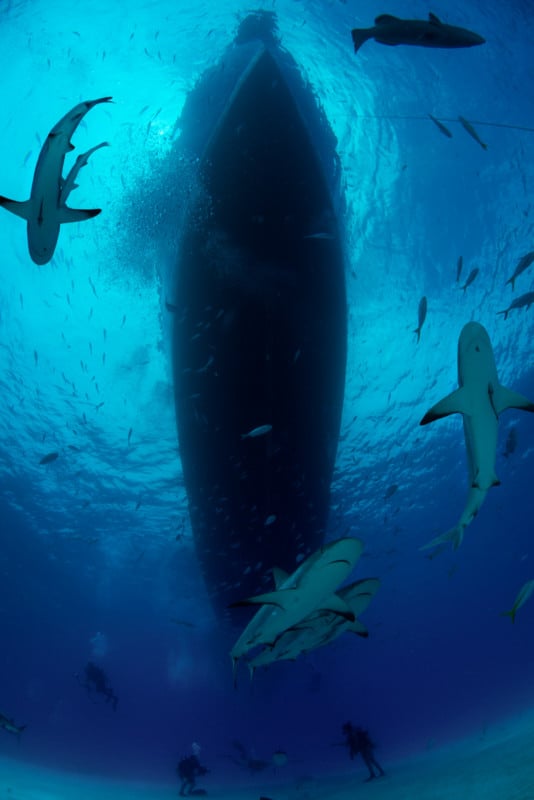 Sharks have become one of the most demonized animals in history, largely thanks to popular culture with films such as Jaws and the recently debuted Meg villainizing these predators as mindless killers. This has had such a powerful and permanent effect that it even led Jaws’s creator, Blechley, to become one of the biggest shark activists, conscious that his creation had put them on the top of most beachgoers fear list. But even with this in the back of my mind, I’m finding it hard to stop my mind wandering off to all of those rows of teeth. 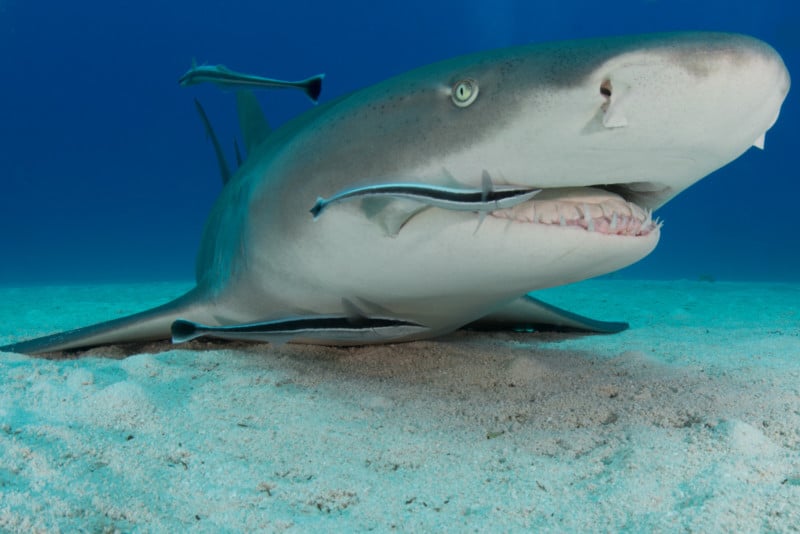 For now, these thoughts are buried in the ritual of gear preparation, an absolute art for underwater photography. I never leave on any shoot without my trusty Nikon D850 (to my mind the best camera on the market). And for this trip I am exclusively using wide angle lenses, so I am geared up with my AF-S NIKKOR 24mm f/1.8G ED and AF-S NIKKOR 16-35mm F/4G ED.

But there is a whole host of other equipment necessitated by such a shoot. This includes underwater housings, specific to each camera body, lens ports for each lens as well as the almost infinite number of wires, and attachments to ensure that when I am under the waves I can rely on my equipment to keep up with me.

After the camera itself, the king among these are the strobes.

The challenge with underwater photography is light and color. Within the first 10 meters, water absorbs all the warm colors of the spectrum – red, oranges and yellows. Therefore, absent any lighting, images will end up with a strong blue cast, draining their impact. Now, strobes only have a limited effective range, so I knew I had to get within at least 4 feet of the tiger sharks to take a decent shot. It is this reality that is sinking in; no telephotos, no cages – instead it will be just me and a shark big enough to swallow me whole. 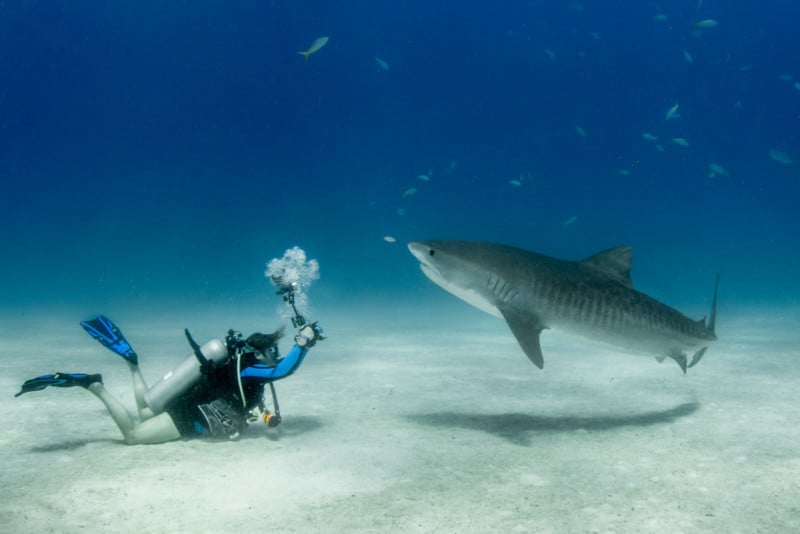 As I prepare for my first giant stride into these shark ‘infested’ waters, I rapidly realized these early thoughts were completely misplaced. As soon as you see these animals you instantly know all of the rumors and hype about sharks are nonsense. The sharks couldn’t have been less interested in me and circled around in total indifference. If anything, it was as if they turned their noses up at this bubbling intruder.

This is completely different to wild cats, who will eye you up from your jeep, staring you down, daring you to give up your high ground. It wasn’t hard to feed off this calm and the moment my head was beneath the waves, reef sharks circling my feet, I knew this was going to be one of the best shoots of my life. 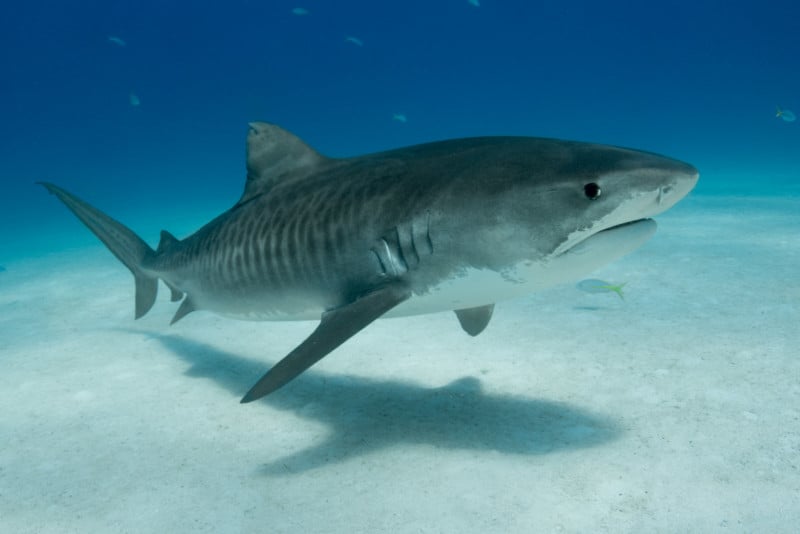 After several dives with no sightings I hear a loud clanking amidst the frenzy of smaller reef sharks circling around me – someone is trying to get my attention. I whirl around but all I can see is hundreds of reef sharks flicking through the water. Then I see it, something colossal is circling us just out of visible distance, the body imperceptible against the blue, only given away by a huge shadow.

That means just one thing: a tiger is prowling. 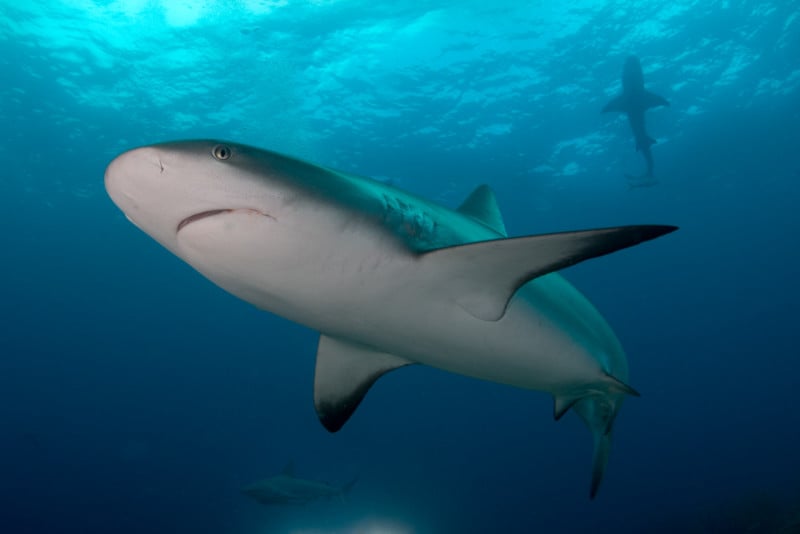 I am struck by the cautiousness of this enormous apex predator as it circles, it has nothing of the arrogance of topside predators, lounging about for all to see. It bides its time, waiting and assessing.

We keep still, very still, holding our breaths, the slightest disturbance can discourage them from coming closer and we are miles too far for any sort of shot. Time hangs but slowly the shadow begins to turn, and I start to see its owner come towards us and my heart thumps as I realize it is making a direct line towards me. From a distance it seems no bigger than all the others, but as it approaches I realize it is enormous — a 14-footer and well fed, and easily over a tonne of pure muscle and instinct. The stripes are dark, so I know this is a younger shark, more inquisitive than those who have learned to know better.

She doesn’t deviate from her course straight at me, and I realize I still haven’t breathed – but I can’t risk it, I want this shot, I can breathe later! 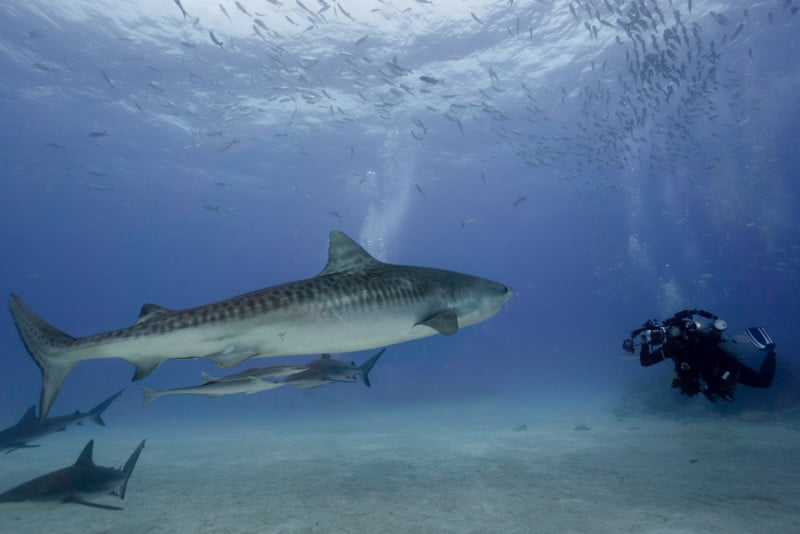 Still she comes, her nose now within a couple of feet of my port, surely one of us has to move! At the very last second before collision she picks her head up and swims over me, her enormous white underbelly blocking out the sun above me. I make a huge exhalation – I got the shot I was looking for and I just won a game of chicken with a tiger shark. 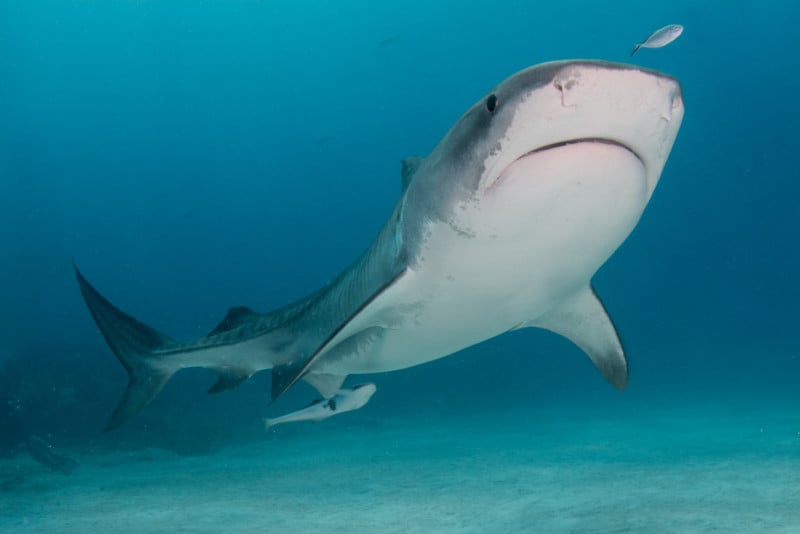 Everyone always talks about the eyes of sharks, black and soulless, the eyes of a ‘devil’. This demonic reputation was, in fact, the major reason I was drawn to these animals. Photography, when used correctly, has a powerful ability to communicate a message and show the importance and beauty of animals once considered the enemy. How can anyone expect to rally behind an animal they consider to be a monster? 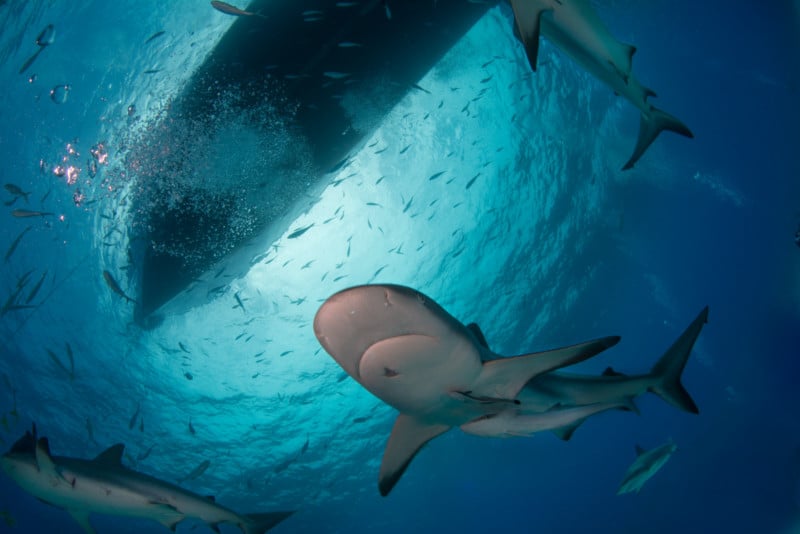 My aim was to help shed a little light on these animals, show the human threats they encounter, and help dispel this myth of the man-eater. On average, 6 deaths are attributable annually to sharks, most of these related to mistaken identity or human error. Contrast that with reports of up to 100 million sharks killed a year by humans, largely a result of the shark fin and sports fishing industries. It is hard to come to terms with our behavior, but clear to see who the real monster is.

I wanted, therefore, to bring sharks into the realm of fine art photography, to put them on the same pedestal as lions and tigers, both of which kill 20 times as many humans a year. This is an epitome of evolution, and that alone deserves our respect, and if a photographer like me can come face to face with the king of the seas and surface unscathed, then it can hardly be a killer – if it had wanted to do me harm, it certainly had had the chance. 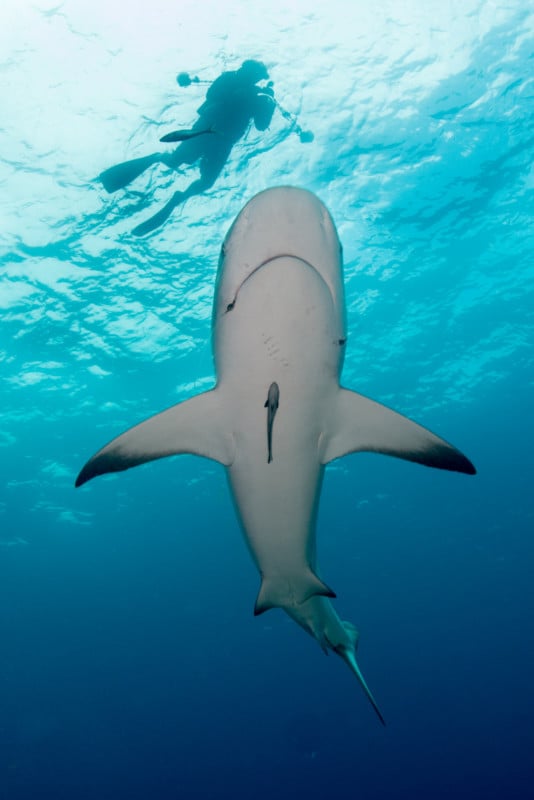 Sharks are dying out, largely due to changes in the environment caused by global warming and overfishing. They are a beautiful and essential part of our ecosystem and we cannot really know what damage it will do to the seas if we were to lose them. But it is not too late, we can help, and we owe it to our planet to try. As difficult as it seems, we need to put aside our misplaced fears and work together to protect these animals for generations to come.

About the author: Harry Skeggs is an award-winning wildlife and travel photographer. The opinions expressed in this article are solely those of the author. Skeggs also leads photo tours. You can find more of his work on his website, Facebook, and Instagram.