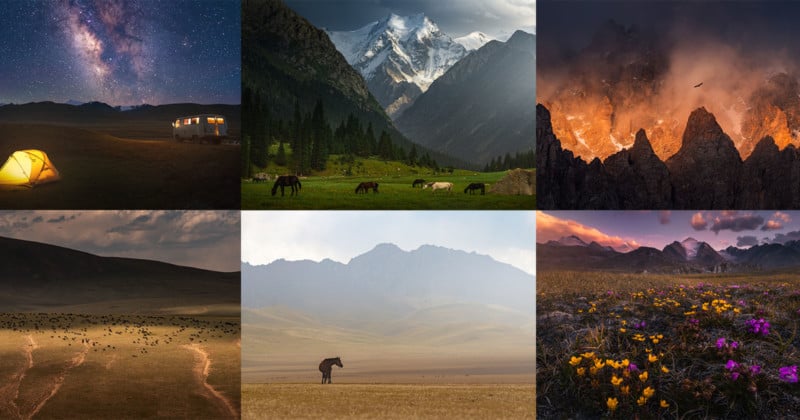 I just returned from 3 weeks in Kyrgyzstan. As a landscape photographer, I have traveled to lots of countries in the world so I guess I can say I am ‘used’ to beautiful landscapes. Until recently, however, Central Asia was unknown territory for me.

I always love to explore countries that are not really on the radar of photographers and travelers in general. It inspires and pushes my creativity. The most important reason for visiting Kyrgyzstan was to meet my girlfriend’s family. But other than that I was triggered by the beauty of its nature.

As a photographer and nature lover, you know that feeling when you see that untouched beauty? Crazy mountains with open valleys? It triggers you somehow. That’s what Kyrgyzstan did to me.

Kyrgyzstan doesn’t require a visa to access. It’s fairly easy to travel to if you’re willing to transfer somewhere. It doesn’t really offer direct flights from most places. You’ll be flying into the capital Bishkek, which is already surrounded by crazy mountains. It starts right there.

Upon entering the city you already see high snow-capped peaks around you. Basically, this whole country has crazy heights and insane mountains. It’s on another level than what I’m used to in Europe, especially living in the Netherlands below sea level.

Being on an altitude around 3,000m is fairly common here with peaks over 7,000m and occasional hikes to 4,000m+. I had a bit of trouble with the altitudes at the beginning of my visit but this disappeared after a while.

Nature in Kyrgyzstan is really untouched and lots of locals live like nomads. The countryside roads are rather bad. I was actually surprised that most are marked as roads on Google Maps because an ordinary rental car would never be able to drive there. You need at least a high 4×4. But with some effort (driving ‘bad’ roads and hiking steep paths) you’ll be able to see some of the most beautiful untouched nature you’ve ever seen.

Endless valleys with huge mountains around you, crystal clear turquoise lakes, wild eagles, canyons, you name it. This country has it all. I was surprised by its variety of landscapes in a rather small area. Just a few hours driving would bring me from snow capped mountains to landscapes that looked like the moon with red canyons and unearthly textures. Americans will know this as ‘Utah’.

Because of the remoteness of the areas, there is literally zero light pollution here. During the night looking up you will see the brightest Milky Way in the sky you’ve ever seen.

When you’re exploring the valleys, you’ll see the locals from time to time. They live in Yurts. Yurts are small ‘houses’ that look like a big tent.

These people are mostly shepherds taking care of cattle in the summer. You’ll see hundreds of sheep or horses with glaciers in the background. It’s a really impressive sight.

These shepherds live without the luxury of things like electricity or a toilet. All of the locals I met in the mountains were friendly. They didn’t speak English much but I think they enjoyed some variety of company as they’re in the mountains for months without much conversation. It’s life at its simplest.

It got me thinking if these people actually need more. They’re just living day by day, with their cattle, not worrying about anything in the world. Literally disconnected from the world and living in their own small world. Just surviving.

During my travels, I visited Bishkek, Chaek, Song-Kul, Around Isskyl-Kul lake and Karakol. There are still a lot more places to explore for me so I hope to return soon. I’d like to mention that despite lots of people think the ‘stans’ are ‘dangerous’ to travel to, I’ve never really felt unsafe. Especially in the mountains where no one really cares that you’re walking around with expensive gear.

I slept a lot in tents, vulnerable to robbery, but nothing ever happened to me. I was often accompanied with locals though, either my girlfriend (and family) or people from Visit Karakol, a travel agency from Karakol that helped me a lot in getting to places that I normally wouldn’t be able to go to by myself. Kyrgyzstan is an amazingly beautiful country with lots of really untouched nature and I would definitely recommend visiting it.