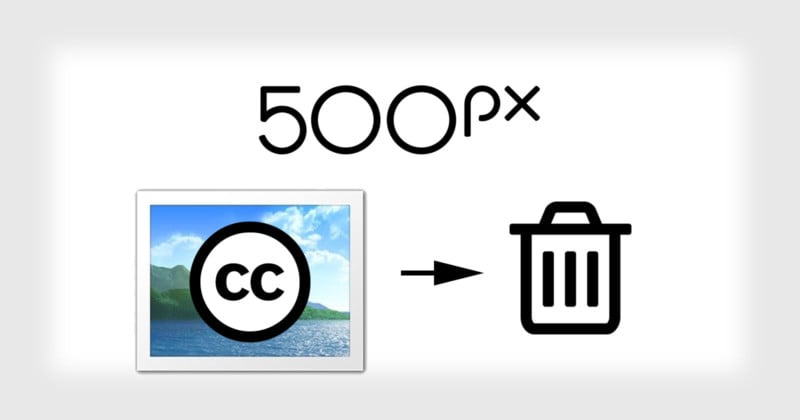 500px just shut down its Marketplace stock photo platform in favor of selling photos directly through Getty Images and VCG, as the company announced a month ago. And as part of the major change, 500px has wiped out over 1 million of the Creative Commons photos photographers had uploaded to the service.

Creative Commons licensing allows photographers to make their works freely available for others to build upon and share while following certain guidelines. 500px introduced the licensing option back in 2012, following in Flickr’s footsteps.

But overnight, all of the CC photos that have been uploaded since 2012 have been nuked from 500px. Users can no longer choose a CC license during uploading, search for CC photos, or download them.

And prior to the wipeout, 500px provided no migration path for 500px users wishing to keep their CC photos on the service alive.

“We don’t have a lot of activity or usage of CC images, although we still have a number of photographers adding the CC licenses to their uploads,” 500px tells CNET regarding why it decided to abandon CC photos. “We still have a number of bugs with the search experience for CC content, a pain point for customers trying to use CC images. We have outdated CC licenses (3.0 or older).”

As you might expect, many photographers and notable figures aren’t pleased with 500px dropping its CC photos so quickly.

Jason Scott, who works on the Internet Archive, says volunteers rushed at the last minute to preserve all the CC photos hosted on 500px, allowing 3 terabytes of photos to be saved:

There's no time for @archiveteam to move in. It's over 1 million CC licensed photos. Gone. Tomorrow. And then they're selling licensing through Getty Images, and a Chinese company.

We just jammed the 500px downloader to 11. Hundreds of thousands of CC photos being saved with full attribution information. Watch it fly, get involved. https://t.co/pN4QGG55QL

3 terabytes of Creative Commons photos going into the Wayback machine thanks to the efforts of dozens of volunteers slamming from NO warning and going for 48 hours straight. Amazing work, everyone. It's going to take a while to understand exactly what we got.

Scott says the Internet Archive is now working to make the data it preserved easily accessible.

Even 500px founder Evgeny Tchebotarev, who isn’t part of the company anymore, has publicly expressed his displeasure:

Creative Commons is critical to the growth and support of the open web.

The decisions of the last few years perplex me greatly.

“The decisions of the last few years perplex me greatly,” Tchebotarev states.

Image credits: Trash can icon by Dave Gandy and licensed under CC BY-SA 3.0