Adobe’s software has been widely used for many years now as a tool to create fake photos, but now the company is developing software for the other side: it’s using AI to spot photo manipulations to aid in the war against fake photos.


In addition to using Photoshop for good, “some people use these powerful tools to ‘doctor’ photos for deceptive purposes,” Adobe writes. “[I]n addition to creating new capabilities and features for the creation of digital media, Adobe is exploring the boundaries of what’s possible using new technologies, such as artificial intelligence, to increase trust and authenticity in digital media.”

Adobe researcher Vlad Morariu has been working on the challenge of detecting image manipulation as a part of the government-sponsored DARPA Media Forensics program.

There are existing tools that can help people spot manipulation — things like metadata and programs that examine features of photos (e.g. noise, edges, lighting, pixels) — but artificial intelligence technology could help take this to the next level. AI could help fake photo detection be easier, faster, more reliable, and more informative.

In a new paper titled Learning Rich Features for Image Manipulation Detection, Morariu describes how Adobe is using AI for this purpose.

The team focused on three common image manipulation techniques: splicing (parts of two photos combined), copy-move (objects in photo moved/cloned from one place to another), and removal (objects removed from photos and filled in, like with Content-Aware Fill).

AI can help identify how and where a photo was manipulated in just seconds. 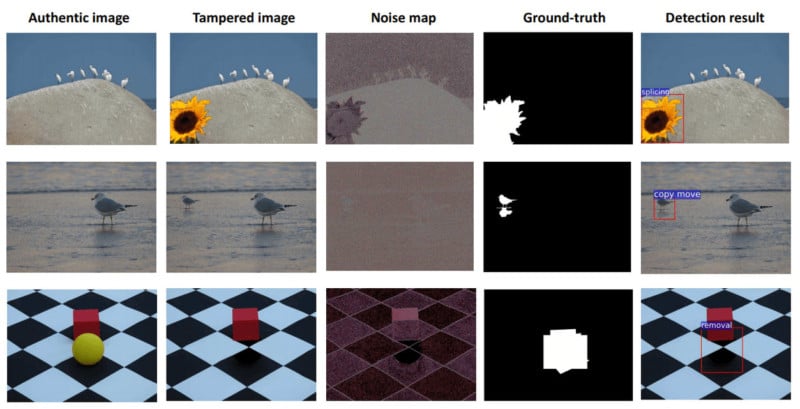 But these technologies will complement, rather than replace, traditional means of “trust” in the world of photojournalism.

“The Associated Press and other news organizations publish guidelines for the appropriate digital editing of photographs for news media,” says Adobe Research director Jon Brandt. “I think one of the important roles Adobe can play is to develop technology that helps them monitor and verify authenticity as part of their process.

“It’s important to develop technology responsibly, but ultimately these technologies are created in service to society. Consequently, we all share the responsibility to address potential negative impacts of new technologies through changes to our social institutions and conventions.”