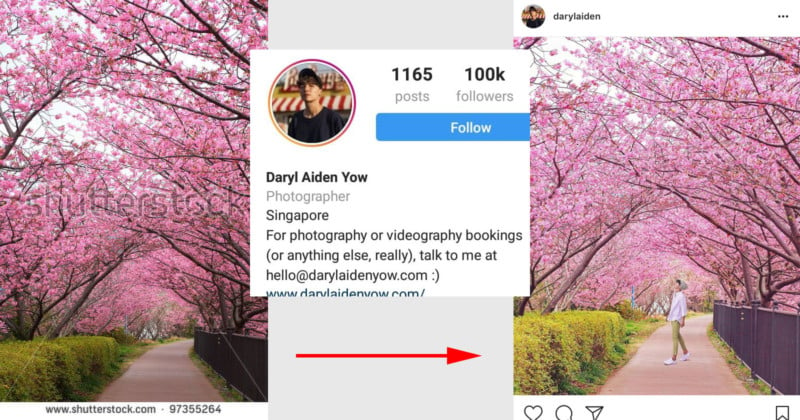 Daryl Aiden Yow is a Singapore-based photographer and social media influencer who has over 100,000 followers on Instagram. He’s at the center of controversy today after it was found that many of his Instagram photos were actually uncredited images shot by others.

Mothership.SG first reported on Yow’s questionable practices, writing tongue-in-cheek that the photographer’s photos “are so lovely, they look stunningly like other people’s work.”

In a 2016 interview with Singapore’s TODAY newspaper, Yow was asked for his thoughts on what makes an Instagram feed attractive.

“All my Instagram photos are shot professionally — I don’t post iPhone photos — probably because I’m a photographer and there are different expectations of me,” Yow responded. “I’m a perfectionist when it comes to my photos.”

But Mothership found numerous examples of photos in Yow’s Instagram feed that look either identical or uncannily similar to photos by other photographers, including those found on prominent stock photography websites.

Here are some side-by-side examples discovered by Mothership through impressive and extensive digging online: 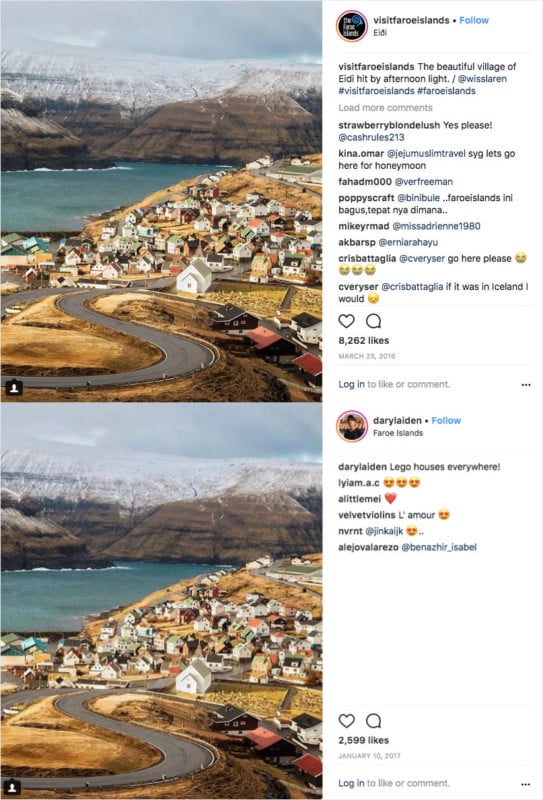 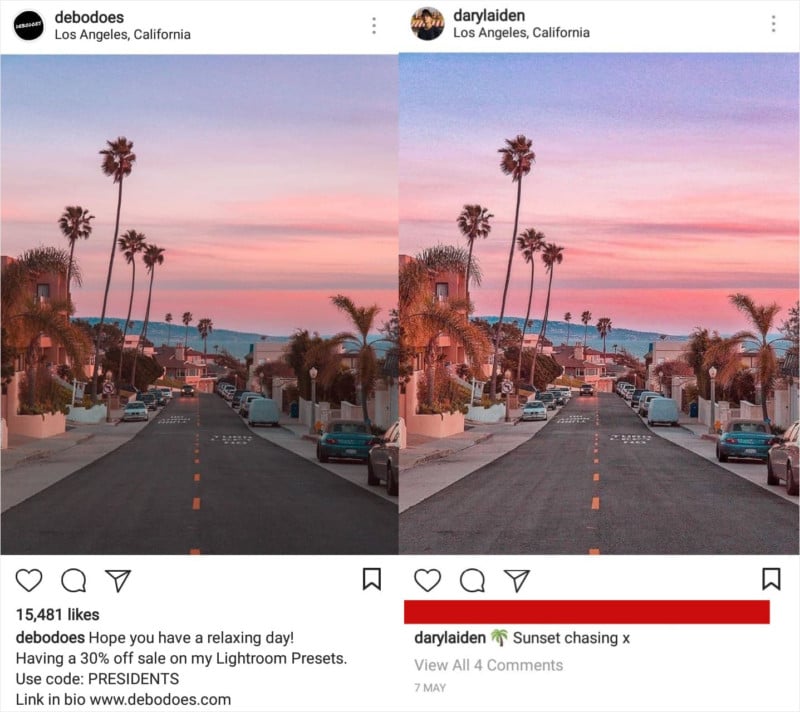 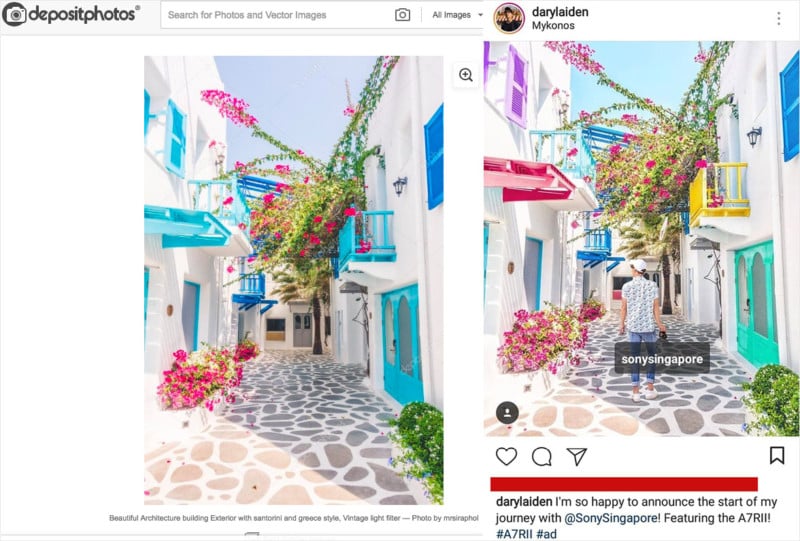 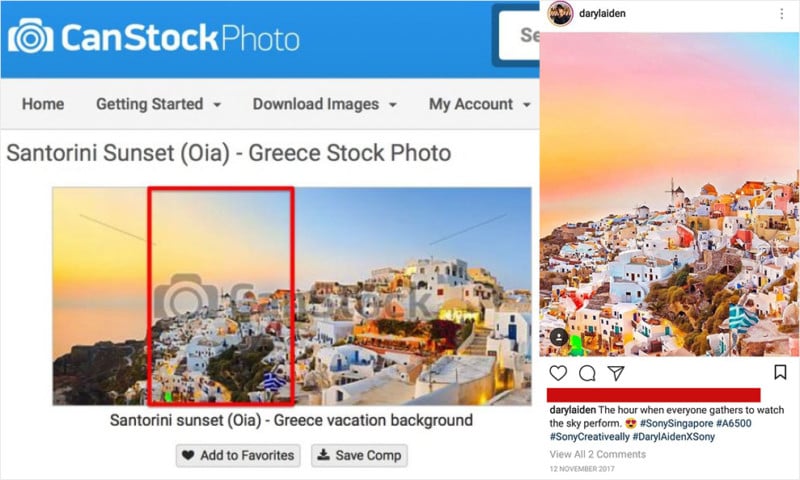 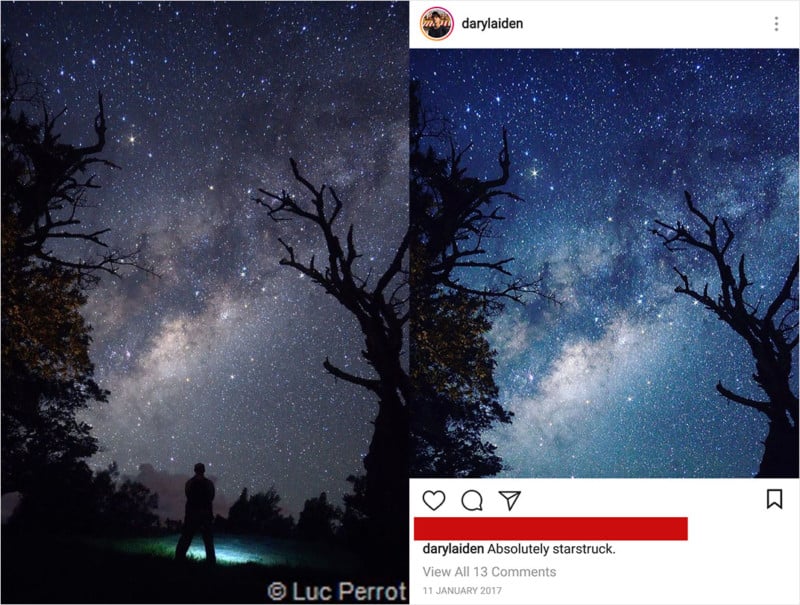 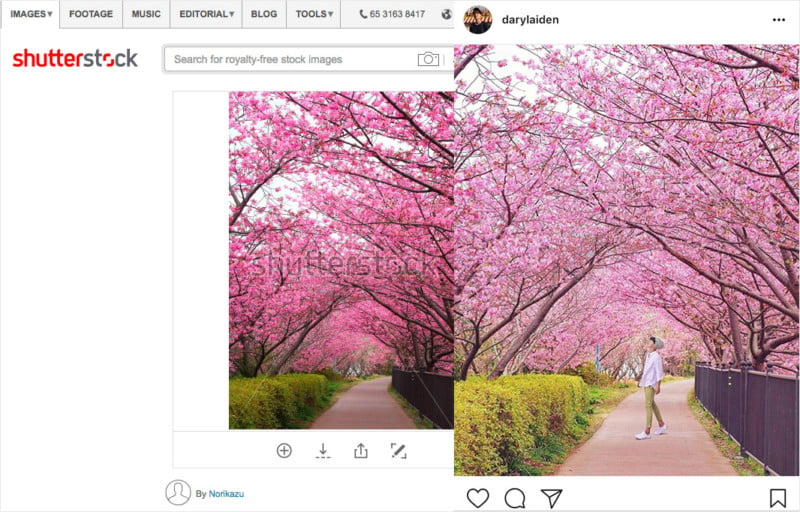 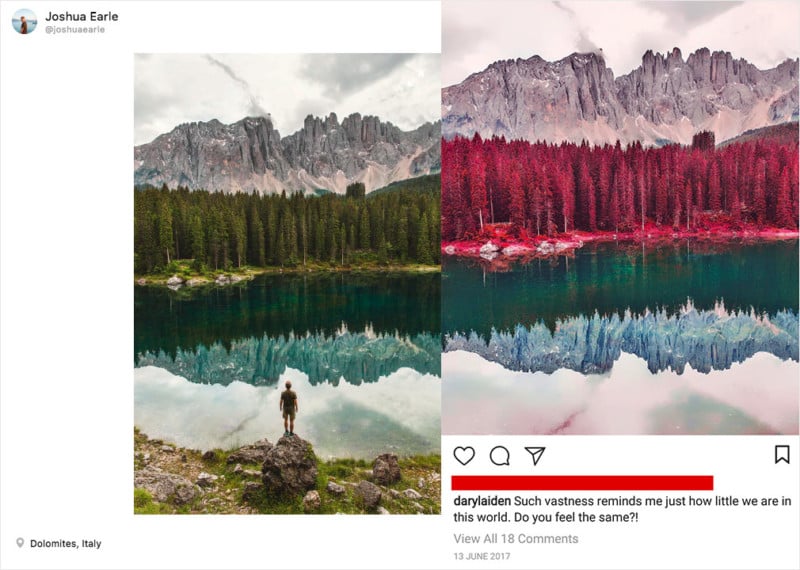 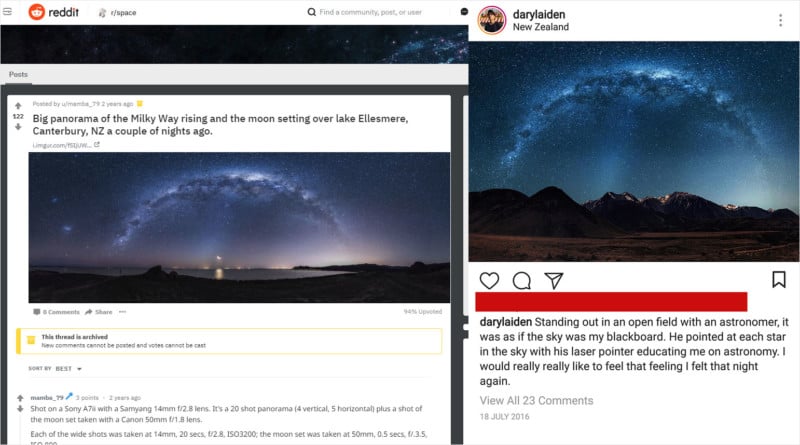 Hours after Mothership‘s story was published and began going viral, Yow appears to have begun quietly deleting select photos from his Instagram account and editing the captions of others to include credits citing where he found the images.

Yow has also since provided a response to the controversy to Must Share News. The photographer admits that he uses stock photos, but says he legally licenses them prior to editing and/or publishing them — he claims to have receipts proving this.

For non-stock photos, Yow says he tries to tag them in the Instagram posts — though, crediting a photographer when copying and publishing a photo without permission is generally still copyright infringement.

“Daryl also claims that he does not sell such photos for personal profit,” Must Share News writes. “We asked him instead about work that he does with brands — in particular, creating sponsored content and posts. For client work, he explains that his clients are aware of the costs of these purchases. Daryl says that he would even submit the receipts to them upon completion of the job.

“As for the captions on his Insta-posts, he says that he never claimed they were taken live at the scene depicted.”

So even though many of Yow’s captions imply that he had captured the images on the spot, he never actually claimed to have shot those photos or to have actually visited those locations himself.

We’ve reached out to Yow for comment and will update this article if/when we hear back. He’s also reportedly planning to release an official statement to his Instagram account “soon.”

Hi everyone, I didn’t intend to release any statement regarding recent events, largely because I did not know how I could accurately express how sorry I am. But seeing how people are now making baseless and false allegations against those close to me—simply by mere association– I have decided to confront the facts instead of leaving them subject to speculation. I did not want to let any more people down. The outrage regarding how I have conducted myself is justified and I accept full responsibility for my actions and all consequences that arise from those actions. I was wrong to have claimed that stock images and other people’s work were my own. I was also wrong to have used false captions that misled my followers and those who viewed my images. Having marketed myself as a photographer, I fell far short of what was expected of me and disappointed those who believed—or wanted to believe— in me. For all of that, I apologise. Those close to me disagree with my actions and have asked, whenever they felt that something was not right about my images, that I stop my actions immediately. I did not take their advice seriously and would give reasons that I thought would assuage any concerns they had over those images—just enough so that we would move on to other issues. I let them down with my actions. I would also like to take the opportunity to clear the air. The end-products of my collaborations with my friends remained honest and fair. Whatever my shortcomings were, I did not bring them to my collaborations. That would not have been fair to those who collaborated with me, and they would not have allowed such practices to be carried out in any event. These people are hard-working professionals and I was hurt to see people make baseless allegations or insinuations against them or question their integrity. They should not be hounded for my errors. To that end, I hope that these baseless allegations or insinuations would stop. I know I have erred and hope that I will be given the time and space to grow and better myself. For those who have stood by me, I would like to thank you and hope that I will be able to earn such kindness in the future.

“The outrage regarding how I have conducted myself is justified and I accept full responsibility for my actions and all consequences that arise from those actions,” Yow writes. “I was wrong to have claimed that stock images and other people’s work were my own. I was also wrong to have used false captions that misled my followers and those who viewed my images.

“Having marketed myself as a photographer, I fell far short of what was expected of me and disappointed those who believed—or wanted to believe— in me. For all of that, I apologise.”

Update on 6/22/18: Yow was apparently a photography ambassador for Sony in Singapore, and Sony Singapore has reportedly now taken down mentions of Yow on official pages.

Update on 6/25/18: Yow has deleted all of his photos from Instagram in the aftermath of this scandal.