Photographers Tony and Chelsea Northrup were shocked when they discovered one of their photos being used on a product’s packaging without their knowledge or permission. They then sued the photo thief and collected AU$60,000 (~$45,000) for the offense. Here’s a 26-minute video in which they share the story of how it all happened.

It all started back in May 2016, when the Northrups were sent a photo of a fancy $49 iPhone case on a Target store shelf… with a photo Tony had shot of Chelsea (using a DIY ring light) staring out from the screen.

Knowing that they had never licensed out the photo — it was used on the cover of one of their popular books — Northrup sent an email to the brand demanding they cease and desist and asking for payment.

“We were never contacted about nor compensated for the use of the image,” Tony wrote. “We insist you remove the product from retailer shelves, and cancel any open orders. We also seek compensation and damages for the misuse of our intellectual property.”

When the company finally replied after a lengthy period of silence, it was through a letter sent from a lawyer that blamed an external graphic designer for stealing the photo. “Our client was unaware that the graphic that was being used was anything other than a stock photo,” the letter read. “Our client used an external graphic designer whom they made inquiries of after they received your letter. They were informed that the graphic had been taken off a website and incorporated into their advertising without checking.”

And after reassuring the Northrups that the photo had since been removed from everything related to the product, the company wrote that it hoped “that this course of action satisfies your request” — without a response to Tony’s demand for compensation. What’s more, the Northrups continued receiving photos from fans who saw the products still available on store shelves.

That’s when the Northrups decided to lawyer up and take legal action against the company — which was tricky in itself since they’re based in the US while the offending company was based in Australia.

As you can see from this pie chart Tony made, the lawyers in the dispute ended up making about 2/3 of the money shelled out by the photo thief. 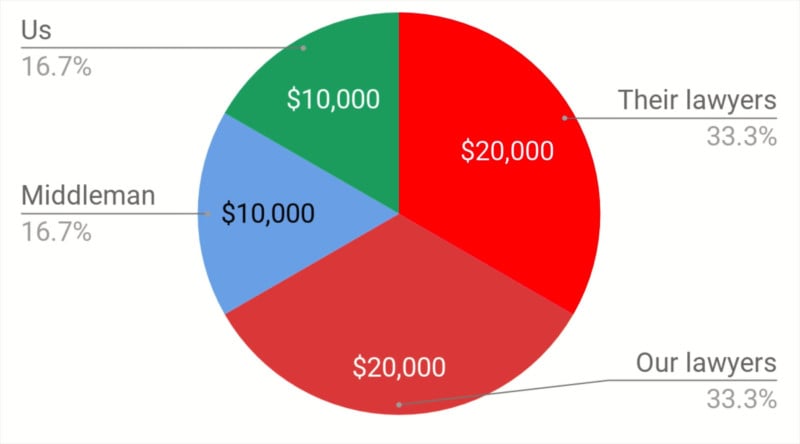 Although the photo thief had to shell out an estimated AU$60,000 for its infringement, the Northrups spent a considerable amount of time and effort on the battle and only walked away with less than 17% of that amount. In retrospect, it seems clear that both sides would have benefited from working things out prior to getting lawyers involved.

US May Soon Require Drones to Have Visible License Plates

Here’s a 4K Flow Motion Timelapse of an African Safari