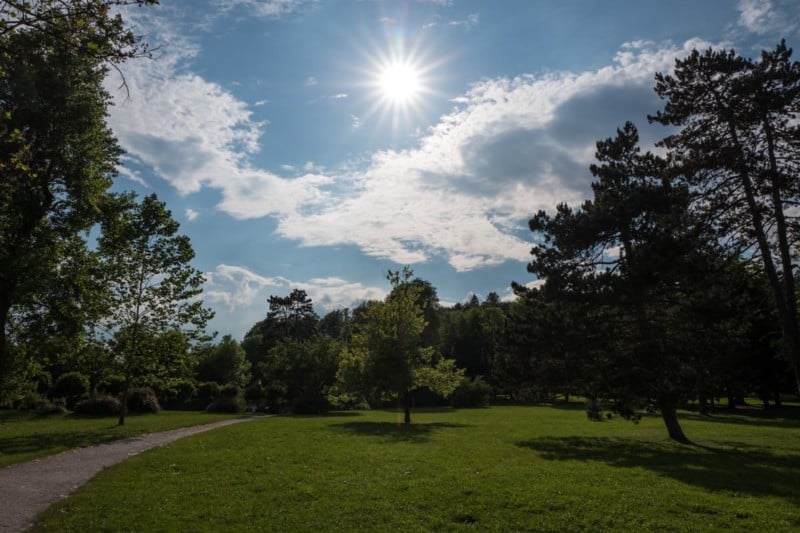 Beauty is in the eye of the beholder, and when it comes to “sunbursts” in photos – those points of light with rays streaking out of them – people often have polarizing views. Optical diffraction is the physical property that causes this effect. The appearance of sunbursts is more technically described as “diffraction spikes,” and it’s caused by the bending (sometimes referred to as spreading) of light around an object like the edges of your camera’s aperture.


When an aperture is large relative to the wavelength of light, you don’t get much diffraction. But when the size of an aperture is small, the effects of diffraction become apparent. The divergent light of varying wavelengths travel different distances to the camera sensor and cause interference – some interfering waves increase their combined amplitude, while others cancel each other out.

The diffraction that causes spikes is the same property that makes lenses less sharp at large f-stop numbers.

Most modern lenses use an iris diaphragm to control the size of the aperture. Wide open, the effects of diffraction are unnoticeable because most of the light can pass directly through the diaphragm without being affected by diffraction occurring at the edges. But as the aperture becomes smaller and approaches the wavelength of light, diffraction has a pronounced effect. When diffraction occurs around an edge like an aperture blade, it creates two visible spikes of light 180° apart and perpendicular to the blade edge.

On a lens with an even number of blades, the diffraction spikes from opposite sides of the aperture overlap. So n-number of even blades yields n-spikes.

With an odd number of blades, there is no overlap. N-number of odd blades yields 2n spikes. So generally speaking, if you’re seeing about 10 spikes or more, the lens likely has an odd-number of aperture blades.
A camera with a circular aperture (like Waterhouse or Wheel Stops) wouldn’t exhibit a star pattern at smaller apertures. Instead, a point of light focused with the appropriate focal length and aperture would create an Airy Disk – a bright circular spot surrounded by concentric circles that represent areas of constructive and destructive interference.

When the Hubble Space Telescope captured the Pillars of Creation in 1995, it had a profound effect on the public’s perspective of space and space exploration and became one of the most popular space photos of all time.

Like many space photos, some bright stars appear with 4 spikes. While this might suggest a 4-bladed aperture, the spikes actually result from diffraction caused by struts that hold the secondary mirror in place in reflecting telescope designs like Hubble.

By contrast, wide field astrophotography with DSLRs frequently relies on wide open, wide angle lenses, so diffraction spikes are typically non-existent, although comatic aberration in the corners can take on a similar appearance.

The so-called “Star of Bethlehem” appearance has become so synonymous with Deep-Sky astrophotography that some photographers simulate the look even when they aren’t using reflective telescopes.

Sky & Telescope writer Dennis di Cicco responded to a reader question about the appearance of the spikes in 2006:

Many imaging enthusiasts like the look of spikes on bright stars, and they add them by placing some kind of mask in front of the aperture to mimic the effect of a Newtonian reflector’s spider vanes. Almost anything will work. I’ve used perpendicular wires, thin strips of black paper or tape, string, and so on.

Focusing under low light conditions can be very challenging, and even the most modern phase detection systems can fail to achieve a focus lock without sufficient light. Although it might seem obvious to turn your lens’ focus ring to infinity to photograph the stars, in practice, the far end of the focus ring isn’t always accurate.

In 2005, amateur astronomer Pavel Bahtinov came up with an elegant solution using diffraction to achieve focus. Like the struts on a reflecting telescope, the Bahtinov Mask uses slots cut at different angles to produce diffraction spikes when pointed at a bright light source like a star. The mask is placed over the lens or telescope, and focus is achieved when the center of each spike pair is aligned.

Hence, the physical process that causes the sunburst in your photos can also be used to help achieve better focus in dim conditions. Science FTW!

This Eye-Popping Flyover of NYC Was Shot in 12K