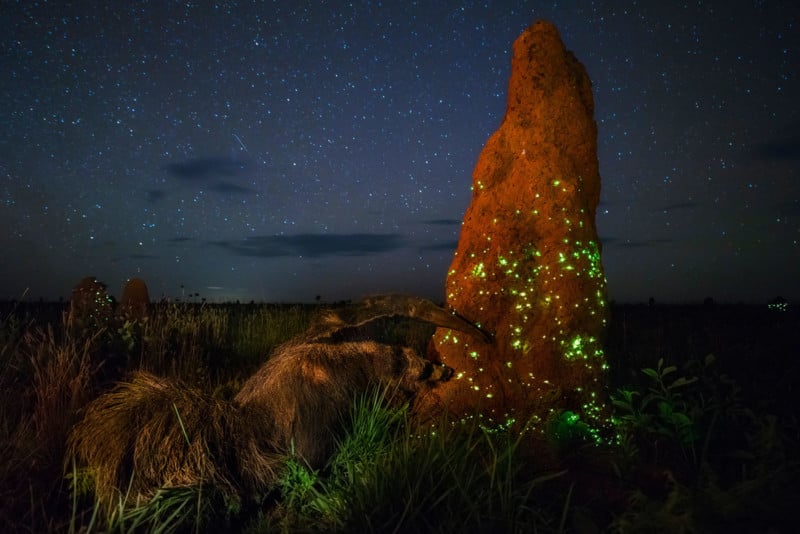 Brazilian photographer Marcio Cabral was disgraced last week after he was stripped of his 1st prize by the prestigious Wildlife Photographer of the Year competition. Judges accuse Cabral of staging his photo using a stuffed anteater.


More specifically, Cabral allegedly used a taxidermy anteater found at the entrance of the same national park his photo was shot in:

The striking similarity between Cabral’s anteater and the taxidermy was noticed by an anonymous whistleblower who then contacted the Natural History Museum, which runs the photo contest. The museum then enlisted the help of 5 wildlife experts who, after reviewing the photos for comparison, concluded that Cabral’s winning photo contains that exact stuffed anteater on display at the park.

As a result of this finding, Cabral has been disqualified from the contest and banned from ever entering it again. The international press coverage of this disqualification has also greatly tarnished Cabral’s reputation as a wildlife photographer.

Cabral has maintained his innocence and adamantly denies that he faked his photo with the stuffed anteater. And if the photographer is actually telling the truth, then he’s been wrongly accused of a breach in ethics and was actually the victim of an extremely unlikely coincidence.

The Photo Itself is Genuine and Wasn’t Photoshopped

In our original report, we wrote that Cabral had presumably created a composite photo that inserted the taxidermy anteater into his nighttime termite mound photo. However, the National History Museum reached out to us to correct this assumption.

Cabral did provide the contest with the actual RAW file of the photo containing the anteater, so the judges had long ruled out photo-manipulation.

“The recent Wildlife Photographer of the Year disqualification was not due to the image being ‘photoshopped in’,” an NHM spokesperson tells PetaPixel. “Digital manipulation had nothing to do with the disqualification and the RAW file of the entry was examined for excessive manipulation and cleared during judging in April 2017 […] The rigorous examination of RAW files for excessive editing is a key element of the WPY judging process.”

What this means is that Cabral is accused of physically transporting the stuffed anteater from the visitor center at the entrance of the park and placing it next to the termite mound to stage his photo.

“[T]he specimen at the park entrance is on open display and is not fixed to the ground,” the museum tells PetaPixel.

The Photo Was a 30-Second Exposure with a Flash

In addition to providing an original RAW file containing the anteater, Cabral also provided the investigators with RAW photos captured before and after his winning photo, except none of these other photos contained any glimpse of the anteater.

While people interpreted this as a clear sign of guilt, Cabral did offer his simple explanation for why this was the case.

“Unfortunately, I do not have another image of the animal because it is a long exposure of 30 seconds and ISO 5000,” the photographer told the media. “After the flashes were fired, the animal left the place, so it was not possible to make another photo with the animal coming out of the place that is totally dark.”

The contest has Cabral’s original RAW file and isn’t disputing his claim that the photo is, in fact, a single 30-second exposure.

If Cabral is telling the truth, then this explanation does make sense: if a flash was used to illuminate and freeze the anteater in a 30-second long-exposure photo, then you would probably only get a single chance to fire that flash and snap the photo before the animal is spooked and retreats into the darkness.

Cabral has also produced a witness who confirmed to the museum that a live anteater was present.

There DOES Appear to be Differences in the Anteaters

Here’s a comparison of the two anteaters, with Cabral’s photo adjusted to show the animal more clearly:

Here’s an animation that loops between the two photos for comparison:

The two anteaters are strikingly similar, but many of the more prominent features and similarities are actually shared among all anteaters. It’s the tiny details that the experts concluded to be too similar.

“The five scientists, working independently of each other, all reached the same conclusion that there are elements in overall posture, morphology, the position of raised tufts of fur and in the patterning on the neck and the top of the head that are too similar for the images to depict two different animals,” the museum says. “The experts would have expected some variation between two individuals of the same species.”

But as these comparison photos spread on the Internet, many observers immediately pointed out that certain features seem to be obviously different. One of these is the anteater’s extended leg.

The stuffed anteater has a large white patch of fur that Cabral’s anteater doesn’t appear to share: 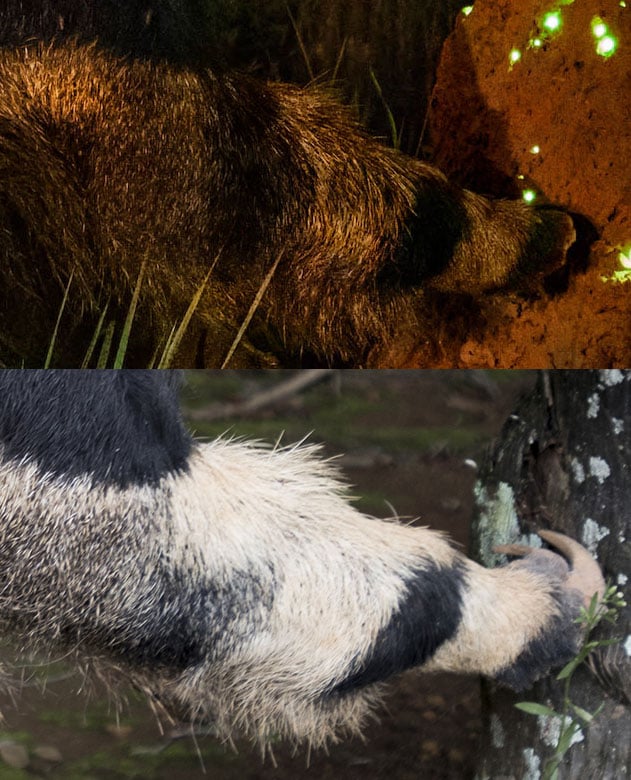 There’s also a black patch on Cabral’s anteater’s leg that appears to extend all the way around the leg, while the patch is interrupted by white fur on the stuffed anteater’s leg: There may also be a paw visible in Cabral’s photo that there’s no indication of in the taxidermy photo (though it’s unclear how much of a difference there is in the perspective and angle of the two photos): 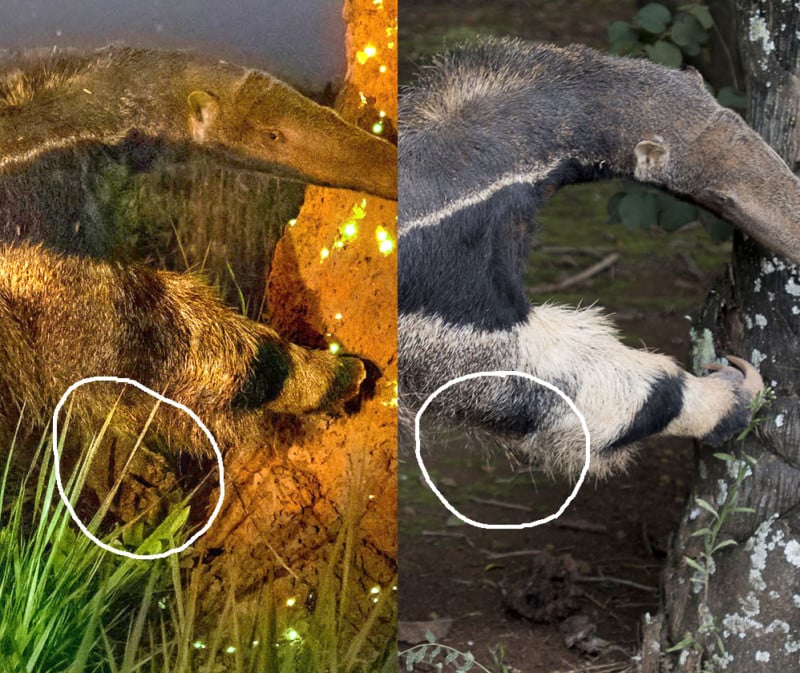 Remember that both of these photos were judged by experts to show the exact same taxidermy anteater. If you’d like to compare the two photos yourself, you can download high-resolution versions of each one here: Cabral’s photo and NHM’s taxidermy photo.

There Seems to be Significant Doubt in the Public

We included a poll in our original report of the disqualification, asking readers whether they agree with the museum’s conclusion. Here’s what resulted: 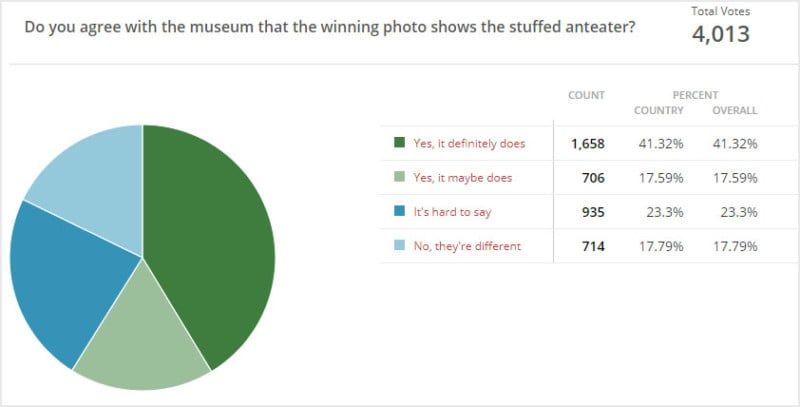 Of the 4,000+ people who have responded at the time of this writing, over 41% had serious doubts about the verdict. Nearly 18% of people believe that the anteaters are clearly different in the two photos, and an additional 23% believe that it’s hard to say from looking at these photos.

Here’s a new poll to see if opinion has changed at all regarding this case:

The Contest is Sticking to Its Guns

After discussing the apparent differences in the photos with the museum, we heard from a spokesperson that the museum is sticking to its disqualification and is confident that the wildlife experts got it right.

“We are confident in our rigorous investigation process and the expertise of the five scientists involved, who between them have expertise in mammals, taxidermy, conservation, South American mammals and anteaters,” the NHM tells PetaPixel. “They reached the same conclusion independently after an extensive examination of the evidence, which included several high-resolution photographs taken from different angles.”

“If significant new factual evidence emerges, the Museum will revisit the matter and evaluate this appropriately.”

We reached out to Cabral but have yet to hear back from the photographer, who continues to maintain his innocence.

Update on 5/1/18: Cabral tells PetaPixel that regardless of whatever evidence emerges in Cabral’s favor, the museum’s decision to revoke his prize and ban him from the contest is final. Here’s the letter he received informing him of the decision:

“T​his decision is final and no negotiation will be considered,” the letter reads. “The reputation of the competition is the paramount consideration.”

Update on 6/6/18: Paul De Ley, a microscopist used to looking for tiny repetitive versus non-repetitive details, took a close look at the two images and believes the anteaters are one and the same. Here’s a close look at the noses of the anteater in both pictures. To my eye, the pattern of 4 cracks on the top skin in the daylight shot is (1) something you would only see in an older taxidermy mount, and (2) the exactly matching positions and angles of the cracks in Cabral’s contest image prove that they truly are both of the one and same stuffed specimen, despite the many possible complications caused by slightly different POV and very different lighting.