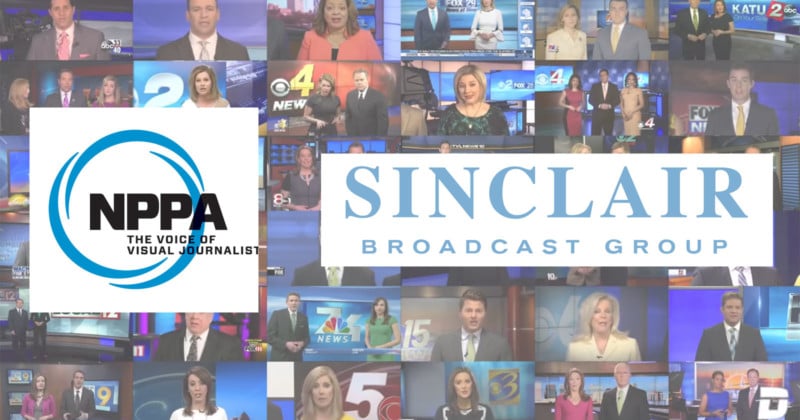 The National Press Photographer Association (NPPA) published a statement this week criticizing Sinclair Broadcast Group for its controversial on-air scripted message for local news anchors. Sinclair responded by canceling a $25,000 donation it had pledged. Now photographers and photo editors are speaking out in support of NPPA.

Sinclair is a public American telecom company that’s the largest TV station operator in the US by number of stations and total coverage. It runs 193 stations across the US that reach an estimated 40% of American homes.

One of the criticisms against Sinclair is that the company often commands its local news stations to air certain stories and messages, known as “must-runs.” Controversy exploded this week after Deadspin spliced together a Sinclair “must-run” in which news anchors read a script condemning “fake news” — this resulting video has gone viral:

On Wednesday, NPPA released a statement from its Board of Directors about Sinclair’s “must-runs” on its website. Here’s an excerpt:

Recently, Sinclair Broadcast Group has drawn attention and scrutiny for editorial opinions and public comments in which a wide swath of the journalism industry has been accused of extreme bias. […]

On-camera personalities – who, to viewers, are the trusted faces of news departments – were used by Sinclair to disseminate their coordinated message. In newsrooms, the division between opinion and fact is a sacred one. Borrowing the credibility of those employees for this messaging could be construed as an affront to widely-held journalistic standards. Our Code of Ethics instructs: “Avoid political, civic and business involvements or other employment that compromise or give the appearance of compromising one’s own journalistic independence.” […]

We implore all media companies to conscientiously consider how we can work together in the future to use our resources and positions of communicative power to protect, improve and celebrate ethical journalism in effective, meaningful and respectful ways. We urge all media companies and our members to always be mindful of the manner in which we criticize the work of other journalists. It has the power to be constructive and lift up our industry, or destructive, further eroding the public’s trust in us. A media landscape of varied perspectives, trustworthy information and the ethical practices that NPPA promotes is necessary and vital for our democracy.

Poynter reports that three of Sinclair’s top news executives have previously won NPPA awards — the most of any corporate TV owner — and that Sinclair has been a huge benefactor of NPPA programs in recent years. One of them, Scott Livingston, Sinclair’s Senior Vice President for News and 3-time NPPA regional Photographer of the Year, gave NPPA this statement:

There’s nothing alarming about the message. The message reinforces our commitment to objective and fair storytelling, and I don’t like the fact that our people are being attacked unfairly. This was based on research. This was designed as a news promo: a message of integrity and accuracy. It’s about having our viewers help keep us honest. We do commentary, but we don’t have anchors do commentary. The script reinforces what we stand for – we stand for objective, fair reporting. Local news is at the heart of Sinclair. We have one agenda: to serve our local communities. There’s a real commitment on a national level to quality storytelling.

Less than 24 hours after NPPA’s statement, Sinclair informed NPPA that it has rescinded a $25,000 donation the company had promised for NPPA’s legal advocacy program.

Photographers and others in the photo and journalism industries are now speaking up and working to raise donations for NPPA to offset Sinclair’s financial blow.

Now would be a great time to donate to @NPPA. Sinclair Broadcasting just rescinded its promised $25K donation to the photographer rights advocacy group after it criticized Sinclair yesterday. https://t.co/drjGf0qese

Sinclair canceled a $25k pledge to @NPPA’s foundation because the press photographers association stood by its code of ethics. Let’s fill that gap. Donate: https://t.co/KWj1maswsY pic.twitter.com/DoeDp0m58f

The National Press Photographers Association made some mild and respectful criticisms of @WeAreSinclair and boom the baby bully company pulled its $25,000 donation to the group. https://t.co/buGDubpIh6

Heck with estoppel. Donate to the NPPA Legal and Education Fund https://t.co/suX9EgxY7o . We did today. I'm a retired industrial photographer.

I’ve been really impressed by the amount of people who have made tax-deductible donations to the @NPPA in the last 14 hours since @WeAreSinclair decided to rescind their 25k to us. #Sinclair #SinclairBroadcasting #photojournalism #photojournalist #news https://t.co/tmVlzD9BmK

The support for the @NPPA since we announced Sinclair withdrew their funding for our legal advocacy initiatives has been unbelievable.

I didn’t want that news to be a call to replace the funds, because it’s really about sticking to our principles, we can live without that money

If you’d like to make a tax-deductible donation to NPPA’s advocacy efforts, you can do so here.

Update on 4/10/18: NPPA tells PetaPixel that it has received over $11,000 in donations so far “from such places as the Grady College of Journalism and Mass Communications.”

What is ‘Middle Gray’? Here’s a Short and Sweet Explanation

Photographer Finds His Stolen Camera Lens on eBay — It Sells for $65,100