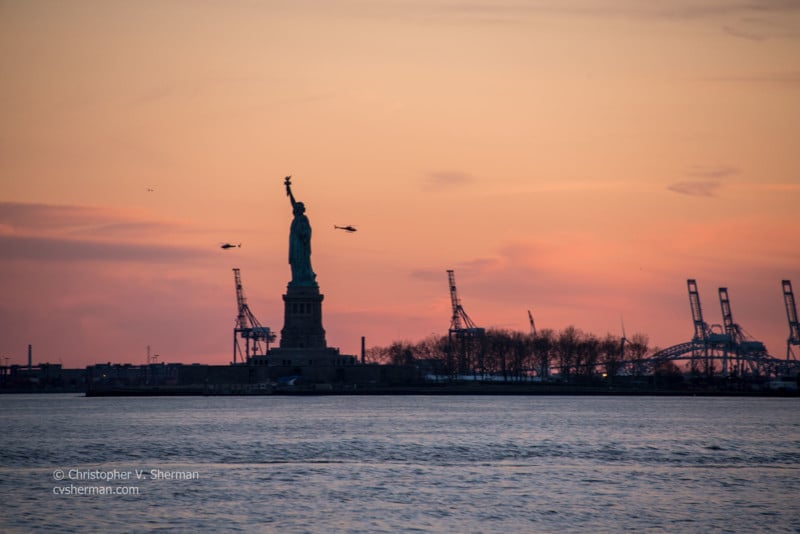 My youngest daughter and I are visiting New York City this week. After visiting the 9/11 Memorial in the late afternoon on March 11, we made our way to Battery Park to catch the sunset, view the Statue of Liberty, and take a few shots. I shot the above photo with a Nikon 28-300mm lens that evening. The next day I found out that one of these helicopters is the Eurocopter AS350 that crashed in the East River about 8 minutes after this photo was taken.

After sunset, we returned to our hotel room and were alerted to the news of the helicopter crash in the East River near 90th street. I read through an early report and then bounced around to other news. We saw several helicopters that evening, they’re all over NYC, so while it caught my attention, I moved on.

The following day I hit upon PetaPixel and discovered its article on the crash, which featured tweeted photos by photographer and journalist Eric Adams. Eric was flying in a helicopter that took off from the same location as the downed craft. Both his chopper and the other circled the Statue of Liberty together. Eric’s unique and fantastic photos on Twitter showed the other chopper near the statue and Battery Park, where I was shooting, in the distance.

I was in the air with @FlyNYON at the same time the #helicopter crashed into #NewYork East River. Not confirmed but I believe this is it a few moments before the incident, and on ground prior to takeoff. Matches make (Eurocopter AS350), timing, and color. pic.twitter.com/kt8wOtyI4u

Additional photos of #FlyNYON N350LH in the minutes before its crash, found once I was able to go through my images. #helicopter #NewYork #aviation pic.twitter.com/R8UKF51P8V

There were the only two choppers at the Statue at the same time that evening at sunset. These had to be the same two. I tweeted Eric my shot and he confirmed the time frame.

I’m guessing that was indeed us—that’s when we were there and obviously there weren’t too many in the air. ✌🏼

The photo above was shot at 6:58 pm. The Eurocopter AS350 crashed at about 7:06 pm, according to media reports. Both choppers appeared to be operating fine in the distance when I saw them.

It’s horrific to read about the crash. Not just the loss of life for those involved but I had considered a flight for myself and my daughter. In the end I never booked a flight only because I was lazy and thought the price might be too expensive (and plus I didn’t think anyone was flying doors-off helicopter rides in the middle of winter). Had I done the research and realized flights were available and as affordable as they were, we could have easily been on one of those fights.

It’s somewhat mind-boggling to have tied this photo together with Eric’s simply by reading a post on a website. As someone commented when I posted this photo on social media: We’re all connected. It certainly felt that way the other day.

About the author: Christopher V. Sherman is a photographer based in Austin, Texas. The opinions expressed in this article are solely those of the author. Sherman is the founder of Flying Camera Media (known as Over Austin in the Austin, Texas area), an FAA commercially licensed, insured and certified professional aerial photography firm, flying state-of-the-art drones. Sherman has been flying planes since the 1980s and drones since the 2010s. You can connect with him on Twitter and his website. This article was also published here.

The Death of DSLRs is Near