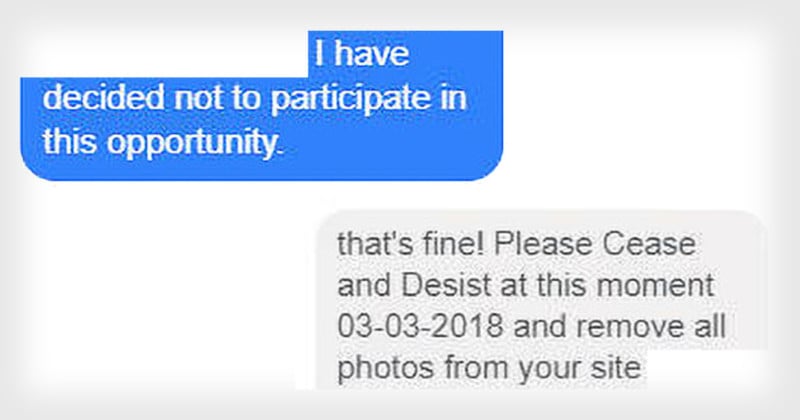 If you’re a business looking to license photos directly from a photographer, there are better and worse ways to respond if the photographer rejects your request and decides not to allow the use of their photos. That’s what one convention recently learned the hard way.

It all started when photographer Toshiyasu “Toshi” Morita was contacted by Michael James, the co-founder of AfroComicCon, which bills itself as “the premiere comic con event for people of color and the African diaspora in the [California] Bay Area.”

James wished to use photos that Toshi had taken at an AfroComicCon event. The conversation through Facebook’s messaging system started out well.

So, James asked about using Toshi’s photos for AfroComicCon’s next event, and after some discussion, Toshi decided to turn down the licensing request. But then things escalated quickly…

In response to being declined the use of any photos, James decided to tell Toshi that he could no longer publicly display his own photos from AfroComicCon on his personal website and that Toshi would be banned from AfroComicCon 2018.

James also stated that he would share this exact conversation with other Comic Con event operators to “warn them” about Toshi’s business practices. Toshi beat James to the punch, however, and published the conversation on Facebook himself as a warning to other photographers.

“I refused to allow Afro Comic Con to use my photos for promotional purposes, and they ordered me to remove my photos, and they have decided to smear my name to other comic cons,” Toshi wrote in the post. “Beware.”

Toshi’s post began spreading as hundreds of other photographers “liked” and “shared” it. He soon heard back from James.

Toshi wasn’t satisfied with this message, which he considered a “non-apology.” Some photographers called AfroComicCon to give it a piece of their mind, while others left negative reviews online. A day later, James published a public apology to Toshi through the official AfroComicCon Facebook page. “I was wrong for questioning his rights to his own photos, I was also wrong to suggest that I would tell other cons anything negative about him,” James writes. “I was wrong to say his community was racist. I have no ill will towards him or his community of friends, cosplayers, and fans. He is welcome to come back to AfroComicCon.

“Part of our mission is honesty about what we see as injustice in our society and I want to say that we were wrong and unjust in this situation so we would like to offer our most sincere apologies and to let you know that I have learned from my mistake.”

This is a ’60-Second’ Handheld Photo of the Milky Way

I Spent a Year Refilling Disposable Cameras with Premium Film