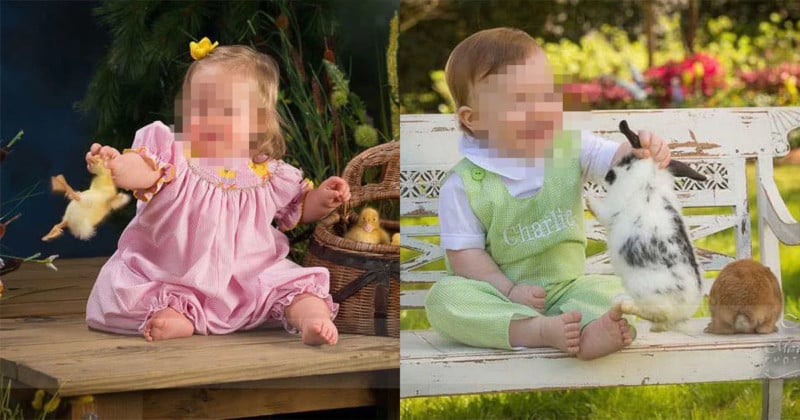 A portrait photographer is receiving death threats this week after his photos began circulating online. Critics are accusing him of animal abuse over his use of live ducklings and bunnies in portrait photo shoots with babies and young children.

Photographer Mercer Harris of Mercer Harris Photography in Washington, Georgia (population 4,295), has been shooting as a professional portrait photographer for over 30 years. He has incorporated live rabbits in his sessions for most of those 3 decades, and he began offering shoots with live ducklings about 10 years ago.

Earlier this week, however, controversy erupted when several of Harris’ photos that were purchased by clients began circulating online through different groups and channels. As the photos have gone viral, critics began slamming Harris’ practice of allowing babies and toddlers to hold tiny ducklings and bunnies.

Here’s a selection of the widely-circulated photos that are at the center of the firestorm: 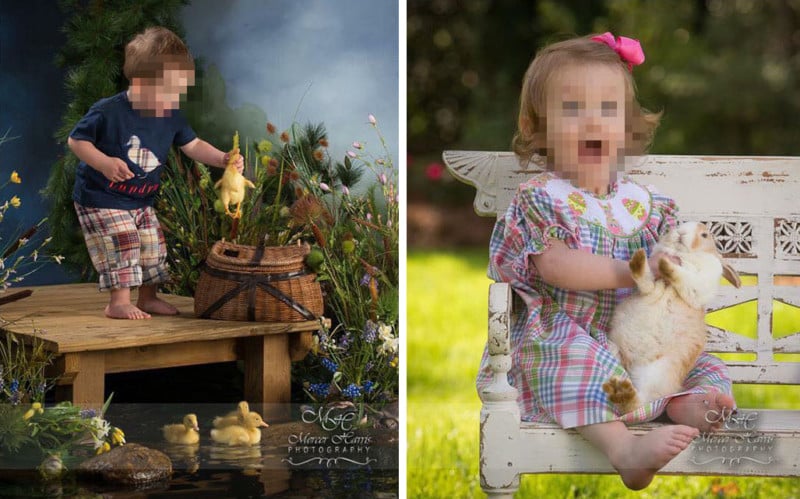 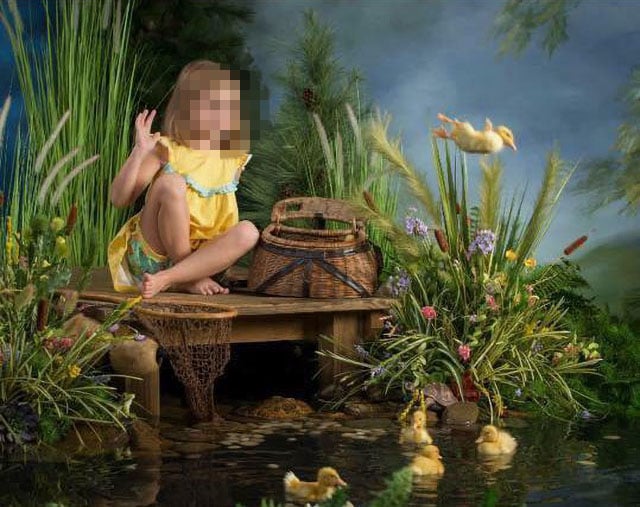 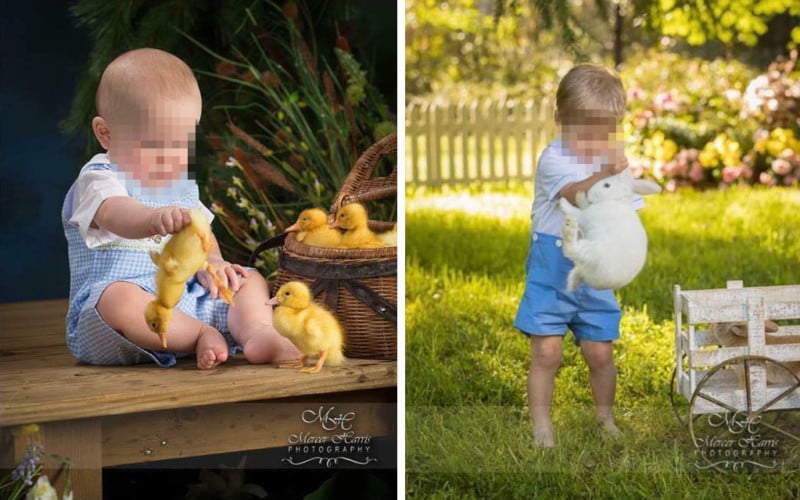 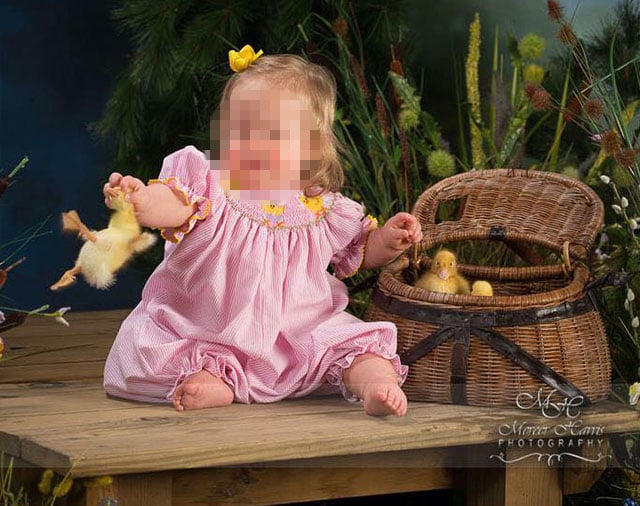 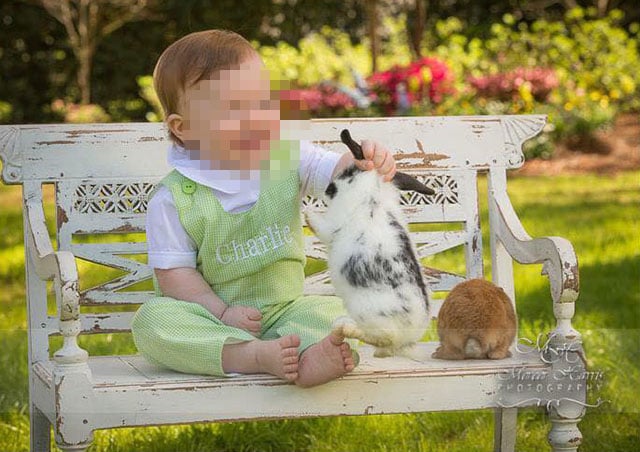 Angry critics have been flooding Harris’ online social media accounts with vitriolic comments, both on relevant posts and also on unrelated portraits that don’t show animals at all. Here’s a sampling:

Other commenters were even more extreme in their actions and words.

One commenter stated he wished Harris would get cancer and die. Another wrote that she wanted to slit Harris’ daughter’s throat. Yet another called Harris’ studio and told his secretary that he wanted to choke her to death. Other commenters have been posting Harris’ address and phone number online.

Harris tells PetaPixel that people have even been calling his local agricultural authorities, city hall, and even the sheriff’s office to complain about the photos, but the authorities have all determined that the studio has not done anything wrong.

In response to the hateful comments flooding his accounts, Harris has deleted his portraits that involve live animals and has removed much of his online social media content.

Harris says his critics are selectively picking out and cropping a small number of photos selected from his entire body of work, and that misinformation is also being spread about what’s seen in the shots.

“We’ve never had an animal harmed or die” over 30 years of photography, Harris tells PetaPixel. “There’s not a single duck that died during these sessions. We completely understand that the ducks are babies.”

Harris says that the goal is to share the love and handling of animals with children, and that adult supervision is always standing just outside the frame to step in and take the animals away if they’re ever handled too harshly (such as when rabbits are grabbed by the ears).

The ducklings have a natural inclination to jump into his in-studio temperature-controlled pond, Harris says. And when the ducklings get wet, the team hand-dries each duckling with cloth baby diapers and use warm air to dry the ducklings.

The ducklings purchased for the 2 days of photo shoots every year are all Peking ducks, Harris says — ducks that would otherwise be sold to commercial growers and be slaughtered for food. After the shoots, both the ducklings and the bunnies are donated to private homes. The ducks are raised to live out their lives in private ponds, and the bunnies are given to interested customers (many of whom are farmers in the area) to serve as pets.

“People have just blown this thing way out of proportion,” Harris says. “Threatening our customers and our children… I don’t know where telling someone that you want to slit their throat is alright. That’s just beyond the pale.”

Update on 3/11/18: One of the serious accusations being made against Harris is that at least one of his photos shows a dead duckling floating in the water. Critics have apparently based the accusations entirely on this sequence of two photos taken just moments apart: 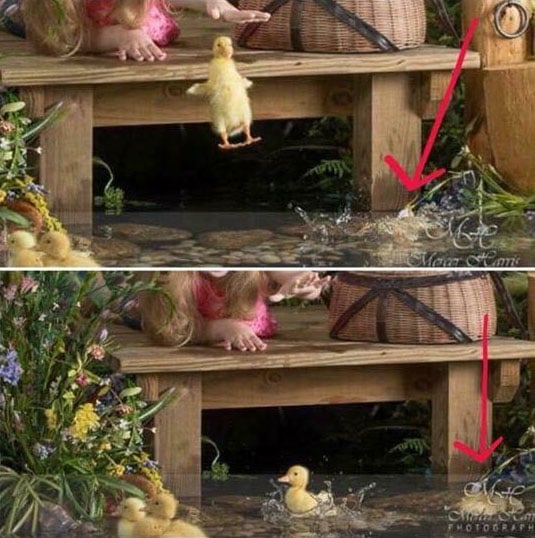 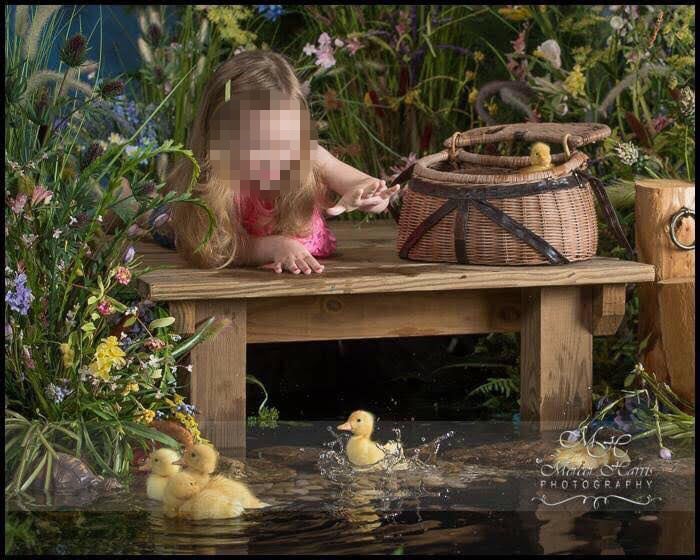 Harris, however, is adamant that every one of the ducklings was fine at the end of the shoot and that they were donated to a private home.

A search on Google for “ducklings diving” shows other photos and still frames that reasonable people would presume to show a dead duckling floating in the water. Here’s one example:

If you watch what was actually occurring at the moment the still frame shows, however, it’s clear that the Peking duckling is anything but dead — it is actually happily diving over and over in the water:

This isn’t to say that what’s going on in the disputed photos is or isn’t animal abuse, but simply that (1) photos can be deceiving, and (2) before rushing to judgement, it’s important to remember that, as Mark Twain once said, “A lie can travel half way around the world while the truth is putting on its shoes.”

Update on 3/11/18: It is indeed true that rabbits should never be picked up by their ears, and it’s generally advised that young children do not pick up rabbits.

“Never pick rabbits up by their ears,” writes the RSPCA in the UK. “It would be extremely stressful and is highly likely to injure them.”

“Young children should not be allowed to pick up a rabbit as the rabbit has powerful back legs and can scratch very deeply, also a rabbit can break it’s own back by struggling if it is held incorrectly,” writes the Tranquility Trail Animal Sanctuary.

The 5 Reasons Why I Switched Back to Canon from Sony