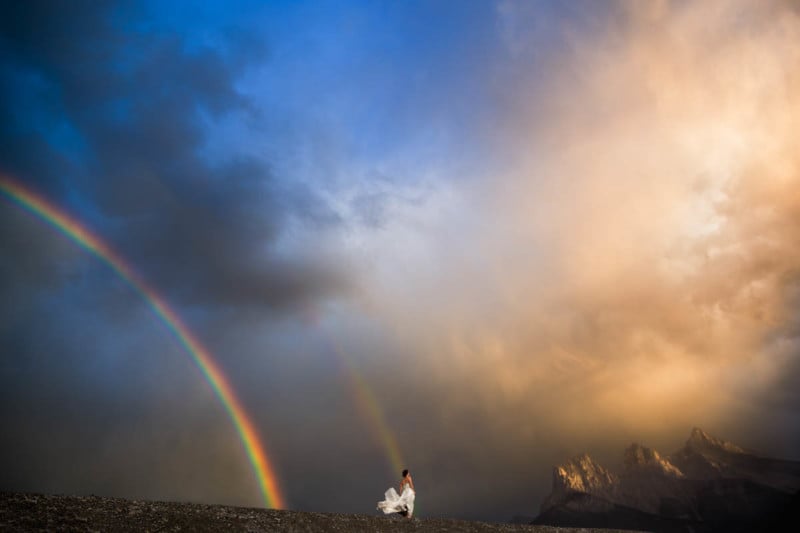 The International Wedding Photographer of the Year (IWPOTY) competition has just announced the winning photos for 2017. The grand prize winner was photographer Erika Mann of Two Mann Studios, who captured a remarkable photo of a bride in front of a double rainbow.


Here’s what Mann had to say about the winning photo:

Paige and Daniel had a super low key wedding, with the reception taking place in their parent’s backyard, with about 25 guests. Thankfully their parents have one of the most beautiful backyards in the planet, along the banks of Cougar Creek in Canmore, Alberta. After a short, and unpredictable storm, we were treated to the most amazing double rainbow. Lanny and I got low into the creek bed so we could remove the houses, and simplify the frame to the rainbow, mountain and Paige, with her dress billowing in the wind.

Here are the other 8 winning photos and photographers picked by the panel of judges:

Single Capture (and Runner Up) 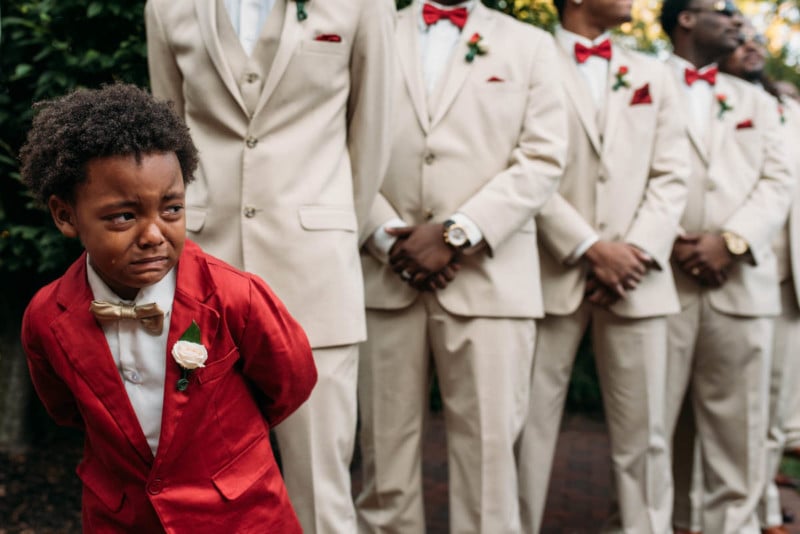 Photographer Paul Woo of the United States won the Single Capture category and was the runner-up to the grand prize for his portrait of the son of the bride with tears in his eyes during the ceremony.

The child was the son of the bride. As everyone stood up and waited for the bride to come down the aisle, he started expressing so much emotion. I was solo shooting this wedding and this moment was difficult because I was secretly bawling behind the camera, and had to prioritize this moment over the bride coming down the aisle. Yes, I got both photos, but I knew this moment was THE moment. I decided to enter the image because everyone talks about timeless and epic photos, and to me it wasn’t about scenic places or post processing. What truly is timeless are moments. 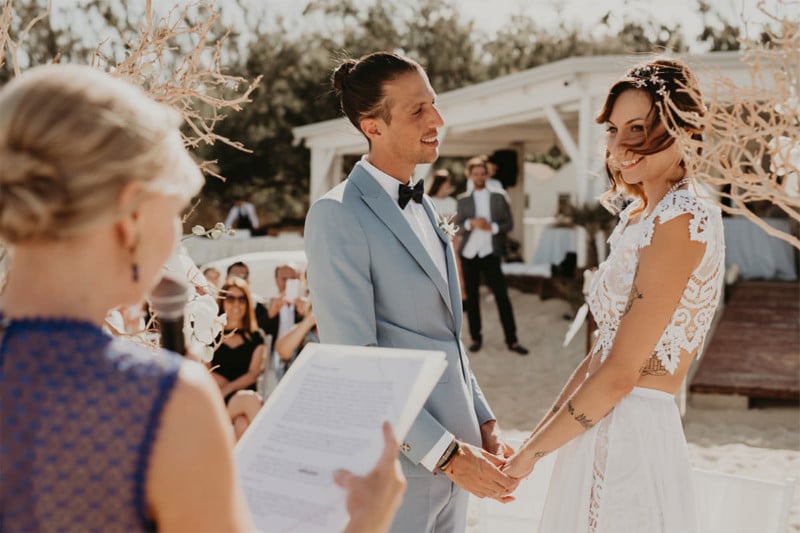 The story of Giulia and Amitai – crossing borders and traditions to create the perfect wedding. She left Italy to find herself, he left Israel to discover the world. They found each other and then themselves – engaged in Amsterdam, settled in Barcelona and married in Sardinia. With the heart on their sleeve, their free spirits and the unbelievable deep connection they created in one day with the photographer, they opened up their most intimate moments before and during their once in a lifetime experience. With their family and friends from all over the world, they gathered on the beach where the sky outlined the ocean and showed that love has no boundaries or no borders. Creating their own traditions and the start of a life that they both always dreamed of – they gave each other their yes and embarked on a journey of love, dreams and happiness. 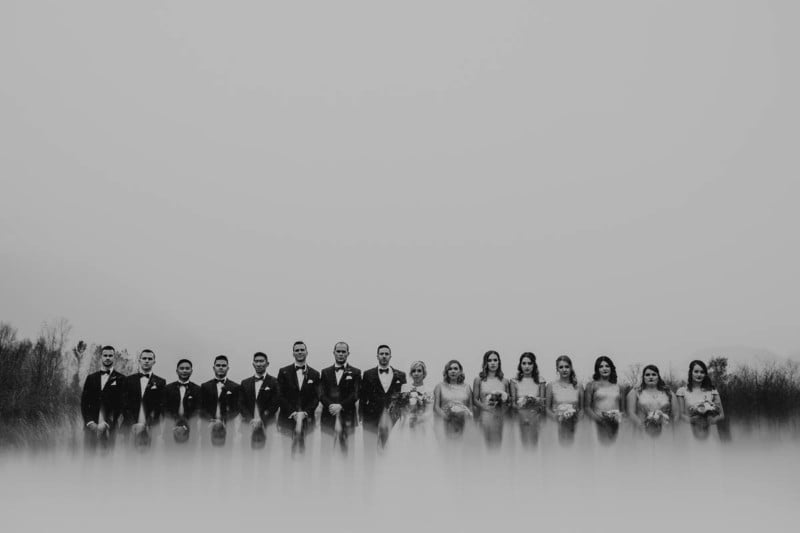 I’d scouted out this location in advance and had the idea to put Sydney and Brandon’s extra large bridal party in front of an impressive mountain backdrop. Instead, we had thick fog and fluffy snow. So, I rolled with it and mirrored the fog using my iPhone screen. If you zoom in close enough you can see the snow on the black suits! 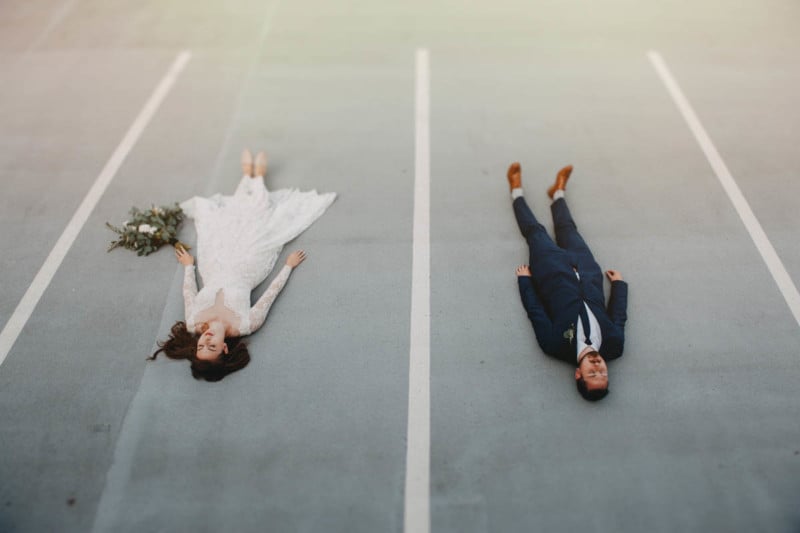 Photographer Jayme Lang of Canada had this photo selected as best Couple Portrait.

This image embodies so much of what I love about Wedding photography. When we walked into the parkade I was immediately drawn to the clean parallel lines & I envisioned the two of them laying in separate stalls, serene & statuesque. I love having the opportunity to get creative with something seemingly so ordinary, like a parking garage. I was lucky that they were trusting enough to lay on the ground in their wedding attire & get creative with me. 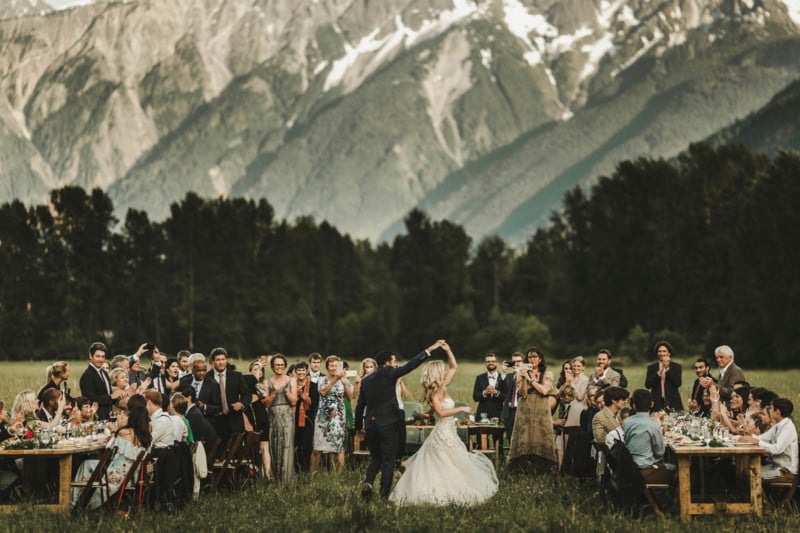 With friends and family from all over the world Kate + Sayed decided on the Pemberton Valley in Canada for their wedding. These two were so stoked to get married. They ran, jumped + danced everywhere during the day so I knew their reception entrance would be a good one! I really wanted to capture the setting along with the celebrating so I backed way up, climbed a fence and set up my frame. One of the biggest perks of shooting together with Shari is it allows one of us to try things a bit differently while the other gets the safe shot. If we only had a single image to describe this day this would be it! 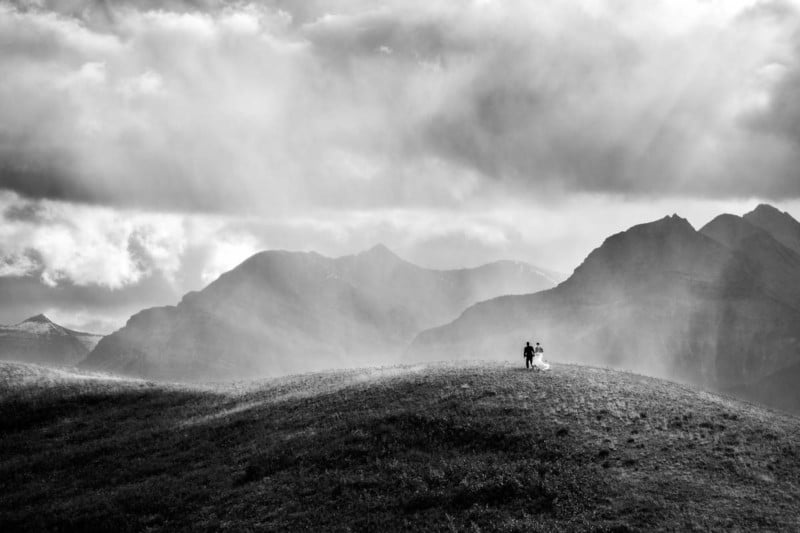 Angela and Dan got married in one of the most beautiful and, on that particular day, windiest places on Earth. You simply can not, however, get married in a place like Waterton Lakes National Park, Canada, and not take advantage of the remarkable scenery. So Angela and Dan headed out like warriors into the buffeting winds for portraits amongst the mountain grandeur! 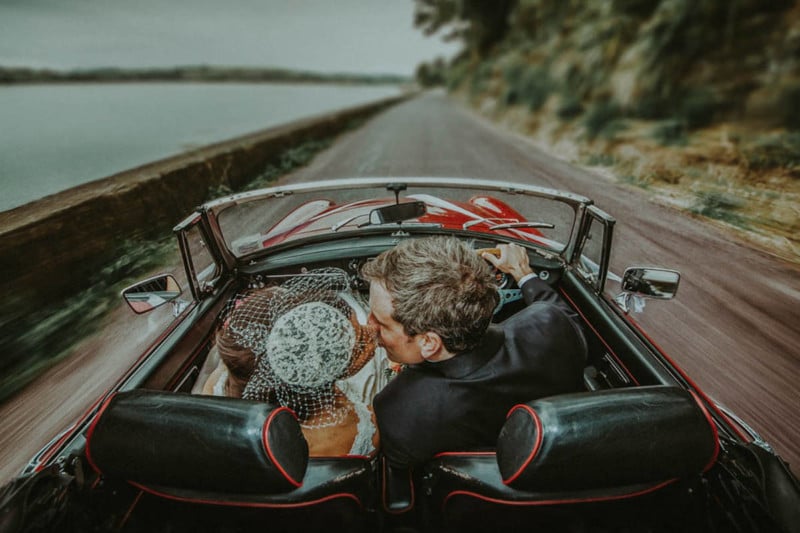 Photographer Adrian O’Neill of Ireland won the top prize for the category From Above.

The Couples names are Maria & Michael and were Married in the University of Cork’s Honan Chapel and the reception was in the Dunmore House Hotel In Co. Cork. The couple were a Wedding photographers dream, they were so awesome. The couple gave me all the time I wanted to get stunning images of them. The actual shot was taken by me standing in the back of the convertible hanging on for dear life, but was so worth it. The couple have this image hanging up in their beautiful home. Im so glad that my images have portrayed their stunning day. thank you very much and very, very kindest of regards.

You can find the other finalist photos on the IWPOTY website. The competition is open to all professional wedding photographers, both part-time and full-time, and you can keep your eye on the website if you’d like to submit your work for 2018 edition of the contest.