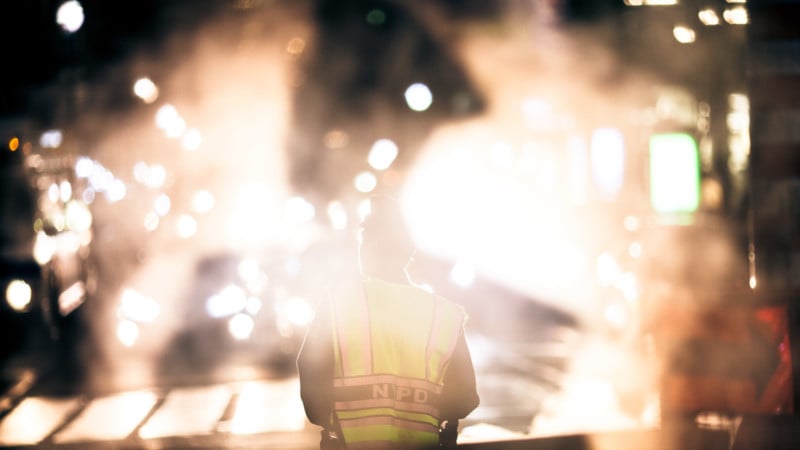 Let’s be honest: how can one be stuck in NYC? NYC was supposed to be a four- or five-day stop for my project Around the world in 80 followers, but it worked out quite differently.

With this project, I aim to travel the world by staying on couches of followers of my Instagram or project in general. Up until then, 90% of the places I stayed at were arranged beforehand with people who followed me on Instagram. Just to be clear: I actually did not know them!

However, nine possible hosts after New York canceled or did not respond to messages anymore, leaving me with no other sleeping spot than the one I had in NYC. It took me 10 days extra to find a new sleeping spot and this one was all the way over in Chicago.

Being left in NYC for longer gave me the opportunity to have time to experiment more. I normally take photos of people in landscapes or one of the two on their own. I loved NYC as a city, but I didn’t want to leave with all the standard pictures of the city. So the question to myself was: how do I approach a city like NYC in which everything seems to be picture-worthy and not leave with the standard photos?

I like to call myself a slow photographer, someone that doesn’t mind waiting for a single picture for half an hour or more. This is something I got from shooting with an analog camera. So, for the first day or two, I did approach NYC as most people do, loved everything, and couldn’t wait to take photographs of everything (but withheld myself from doing so).

I always try to take a day or two (if time allows) to take everything in in order to see through the obvious. I’m not saying the obvious isn’t picture-worthy, I’m just saying that I try not to take those shots unless it has a clear purpose.

Let’s be clear: I did take a photo of the Manhattan bridge and the Brooklyn bridge. But since my planning changed significantly, I had time to take time for every picture-worthy situation, aiming for one great photo a day.

NYC is very photogenic, with every corner you turn a new picture worthy spot appears. In the evenings, with every streetlight a new cinematic scene starts to appear. It was just a matter of waiting for the right people to cross or perform the right action to make the scene complete.

Lesson one: Don’t take out your camera straight away, let the city sink in.

Photos do become better with time as you start to see through the obvious.

Lesson two: Wander to find what you weren’t looking for.

As I wandered through Grand Central Station, I found this spot hidden among the train tracks only accessible for employees, but the light, color combination caught my attention. From that point, I only had to wait, and then this guy showed up.

Lesson three: Search for light. Cities produce very intriguing artificial light — get acquainted with it because with great light anything can become intriguing.

Times Square produces a lot of light and I used that light to get an abstract image of the high contrast crosswalks and the reflection on these shiny shoes were a must to make it appear less flat.

Lesson four: Be patient, take your time, but definitely know when you have waited long enough!

I had sought and sought and waited, but eventually I stumbled upon this scene. Luckily I already knew what I wanted and had the opportunity to take the photo before the metro arrived.

Lesson five: Use people. Cities are built for them. Center them or leave them out on purpose — they can empower your story.

This image was particularly special because the NYPD officer was helping to organize traffic. NYC is known for its outlets of steam on the streets and this was also the case here. As I approached the crossing, the scene as depicted in the photo appeared and disappeared in the blink of an eye. Since I saw the moment happening when approaching, I figured it would happen again, and I waited for the right circumstances to get the picture. Half an hour later I succeeded. You can see in the following video how I found the photo and what I did to get it.

Panning photos at Times Square to get only the subject in focus is very time consuming, but very rewarding if you get what you want.

About the author: Tom Kluyver is a Dutch cinematic photographer and Industrial Designer. His background in design makes him curious for everything that is new and is always searching for aesthetically pleasing things that tell a story. You can find more about his project Around the world in 80 followers here. You can also find more of his work on his blog, portfolio, Instagram, YouTube, and Facebook.

The Olympus Accounting Scandal is Being Made Into a TV Series